Things a puppy plays with

I must admit, before we got a puppy, I didn’t really realise that dogs needed toys. I’d seen dogs in the park with balls, of course, and I’d seen the odd squeaky toy lying around people’s houses, but that was as much as I knew about dogs and toys.

While we’d spent a long time thinking about getting a dog/ puppy, in the end we did get Hetty the cockapoo puppy in rather a rush. So we didn’t put a huge amount of thought into toys. We went to the pet shop to stock up on necessities and my husband and daughter took charge of the toys. Between them, they chose a small blanket-like thing with a teddy bear’s head (like newborn babies have), a small pack of balls, a small rope with rubber bones on to chew and a hard bone-shaped thing to chew on. 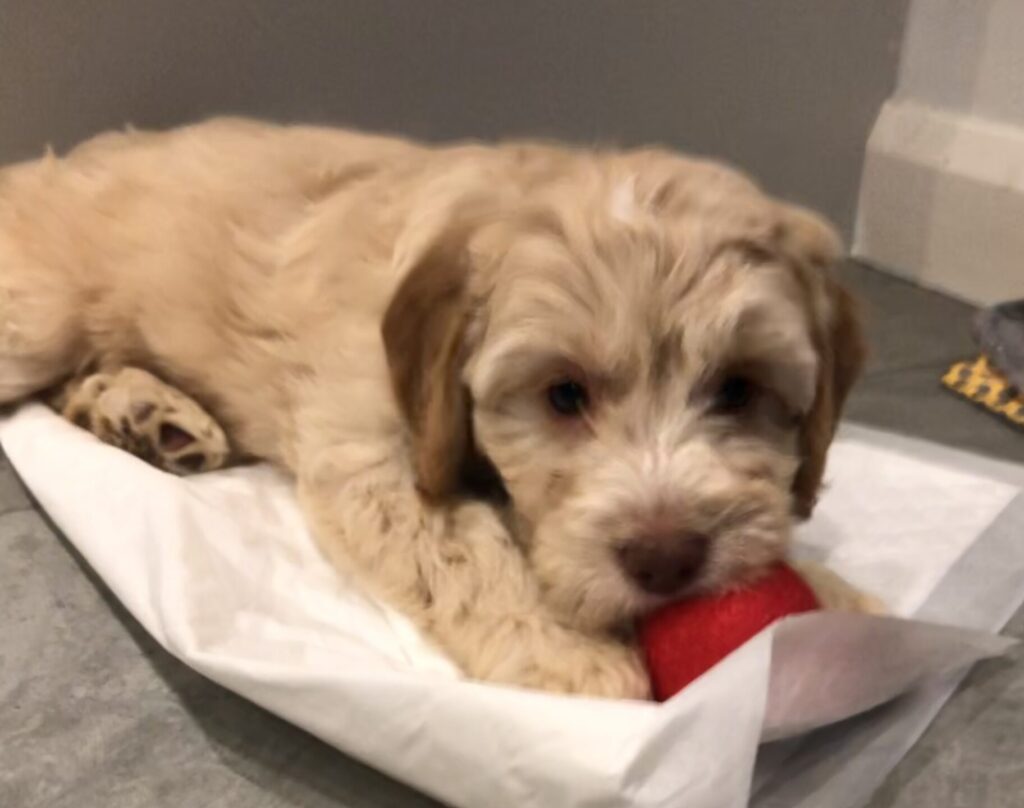 When my parents and sister arrived to visit Hetty soon after we brought her home, they both bought her a cuddly toy – and elephant and a giraffe, as well as a slightly bigger and bouncier ball. I didn’t even knew cuddly toys were a thing for dogs! And I didn’t know that buying toys for new puppies was a thing, either. But you learn fast as a new puppy owner!

Puppies need toys as something for them to chew on, especially when they are teething. This will save your skirting boards and chair legs (most of the time, anyway). Cuddly toys give them comfort, and can also be chewed. (I’ve been very impressed by how long-lasting the Pets at Home monkey and giraffe are. Hetty managed to chew her first bed to bits, but the monkey and giraffe are still intact.) Some people buy cuddly toys from charity shops to give to their puppies and dogs. 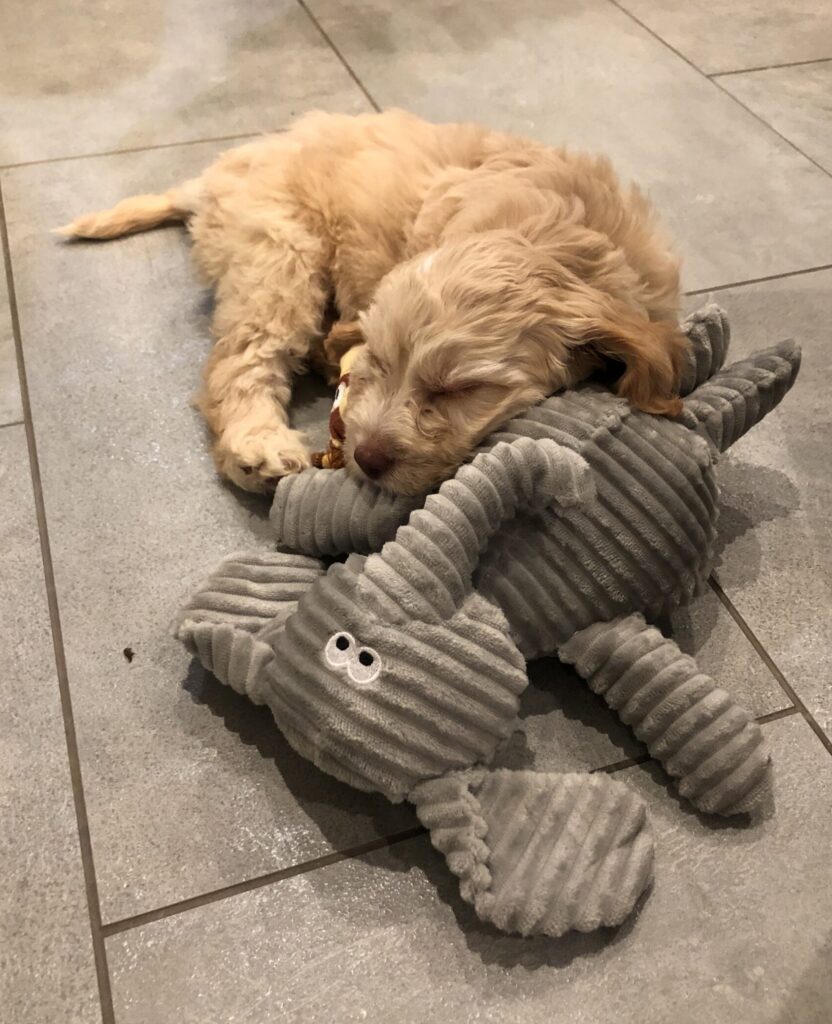 They also need toys for mental stimulation and to keep them active (of course, balls are the best thing for this). Hetty has already moved on from the very small balls we bought her initially to the bigger ball my parents bought her, which was too big for her at first. Like many dogs, she likes to chase it, then carry it in her mouth.

From those initial few toys, we’ve got a greater understanding of what Hetty needs, so have bought a few more.

Essential for stopping her from biting us while teething was a long rope toy. We’d been gently putting the giraffe in her mouth when she was biting, but the giraffe was too small, so even though she might have been trying to bite the giraffe, she was inadvertently biting us too. The rope is long enough that we can stand upright and move it around on the floor. This means she can either bite it at floor level or stretch up and bite higher up, still without biting us. This is an enjoyable game to her, so she doesn’t realise it’s our cunning plan to stop her biting. 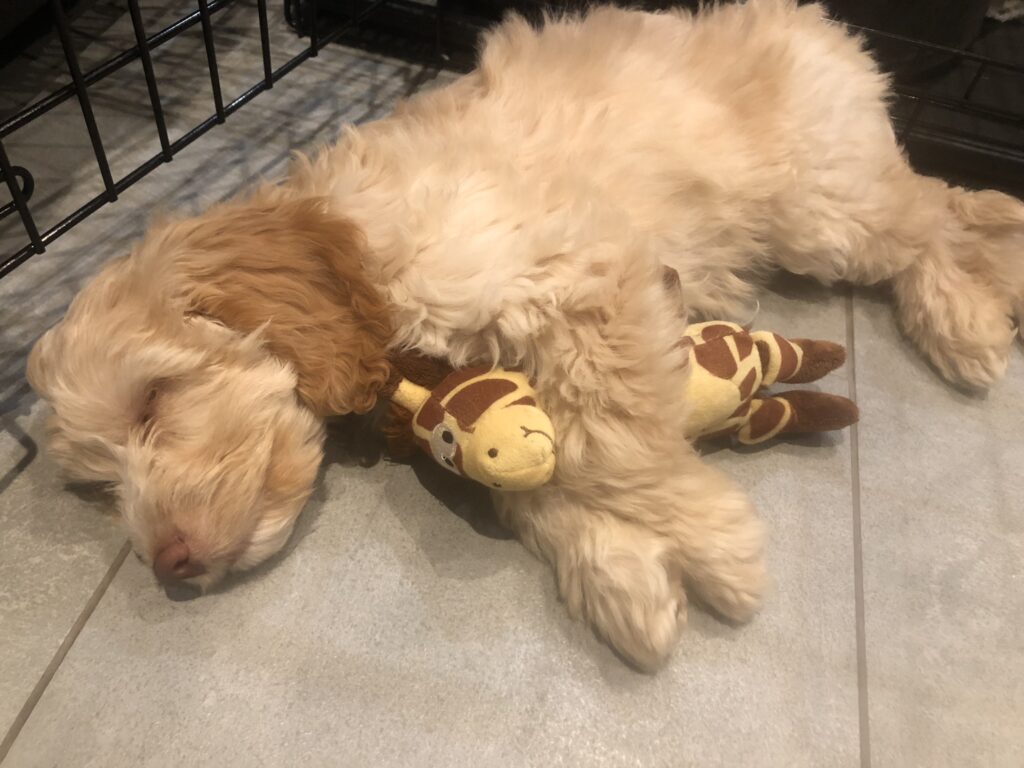 Hetty likes to pick up sticks and chew them to bits. This is definitely not recommended, as the stick can splinter and can cause injury in the mouth. If they swallow any pieces, they could cause a blockage or give them a stomach upset. At puppy class, all of the puppies were given a big hard piece of dried meat to chew. Hetty loved it. She took it home and kept chewing. It started to turn manky and we took it off her the next day. I could see the benefit to her, but as a vegetarian, I didn’t want a piece of dry, manky meat lying around the house. So instead we invested in something else recommended at puppy class – a natural wood stick. They can be made of various woods. Ours is made of wood from the coffee plant. It does get worn down by chewing and little pieces come off (they look like tiny flakes of sawdust), but they aren’t harmful to a dog. It cost £11 and will last for several weeks of near constant chewing. It stops her biting furniture and helps her to settle down when she needs a rest. It seems like a very good investment. 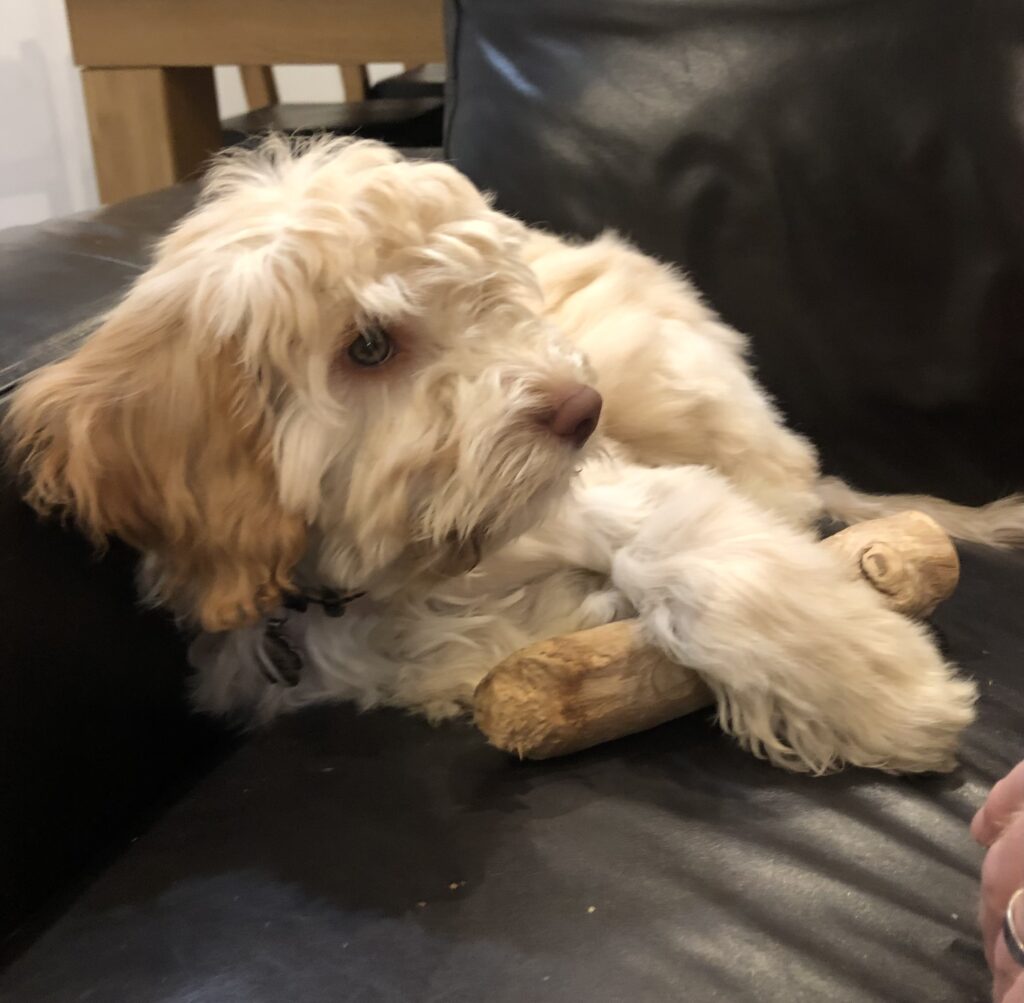 Hetty and her special stick

The good news is, puppies don’t just need to play with toys from shops. We have found the contents of the recycling box to be an endless source of entertainment – and once things show damage, they go back in the box to be recycled.

Cardboard is good for teeth and puppies enjoy shaking it round and destroying it – a shoe box of course entertains for longer than a toilet roll tube. Cardboard tubes from foil are particularly tough and will last for days.

Plastic bottles are endlessly entertaining. Throw them along the floor and they move very quickly and make a very satisfying noise for the puppy. This is a great way to entertain them in those dark days before their second jabs, when they’re not allowed out for a walk, but still have energy to burn off. Hetty also particularly likes plant pots, which she can hold in her mouth and run round the garden with.

If you’re going to get rid of some old socks, you could give them to your puppy instead. They are another thing they will enjoy carrying and shaking around. (Obviously if your puppy prefers to bite them into pieces rather than carry them round, this isn’t a good idea.)We haven’t made this mistake ourselves, but we’ve been warned to never give them old shoes – as they can’t differentiate between the old shoes they are allowed and your nice shoes that you wear and don’t want destroying.

If you’re going to recycle a paper carrier bag, take the rope handles off, tie a few knots in them and give them to your puppy. They are another thing which it is nice to chew, shake around and run with.

As puppies can get bored of the same toys, it’s a good idea to rotate toys – put some away every few days and get some different ones out. We also have duplicates of the giraffe and elephant, as Hetty always has them in bed with her. It means we can wash them every couple of weeks. and she is never without them.

As Hetty grows up, no doubt she will start to need different toys. What toys do your puppies play with, and what do you recommend for a slightly older dog?