My husband, daughter and I recently went to Disneyland Paris for the first time in over 10 years. A lot had changed and a lot had stayed the same, but it was still magical and I still loved it. You can read about the hotel and the rides here…

One of the best things about Disneyland Paris is the parades. Every day, pretty much everything stops for these fantastic floats depicting Disney characters and films to pass up Main Street. This year is the 30 year anniversary celebration and there was a special parade. Mickey and Minnie have got new shiny costumes and they were out with Donald, Daisy, Woody, Jessie, the Genie and lots more. The characters get on and off the floats and go to dance on the stages in front of Sleeping Beauty’s Castle. It is really lovely. 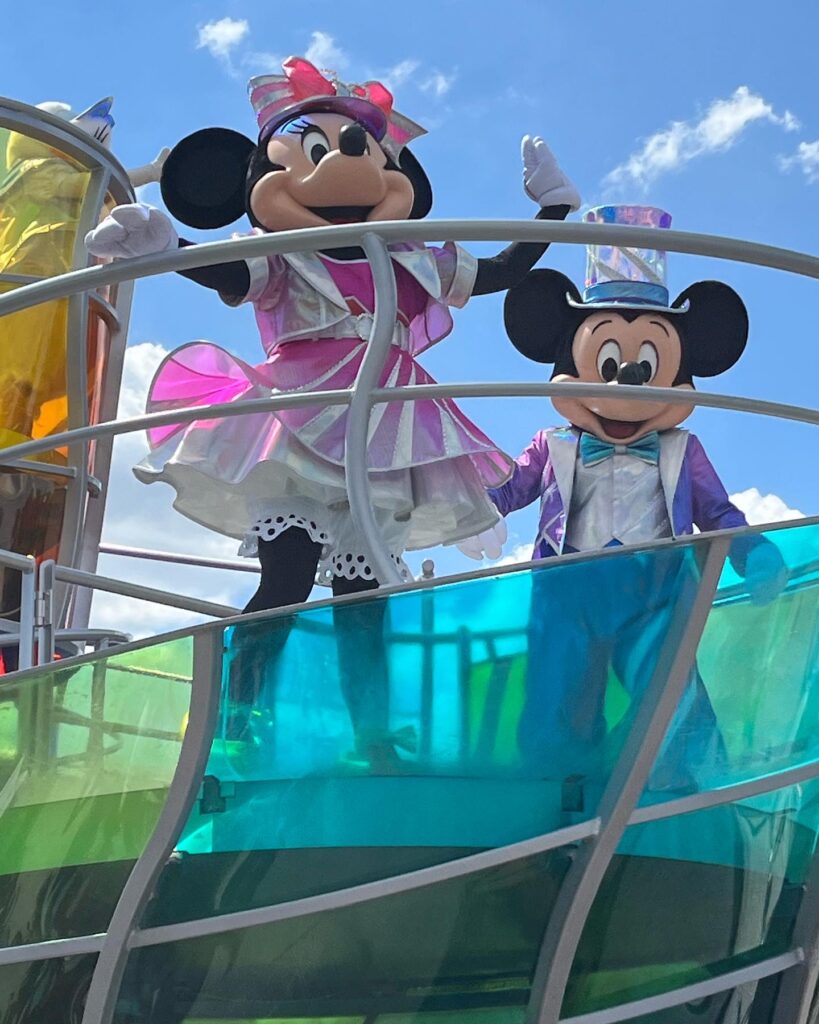 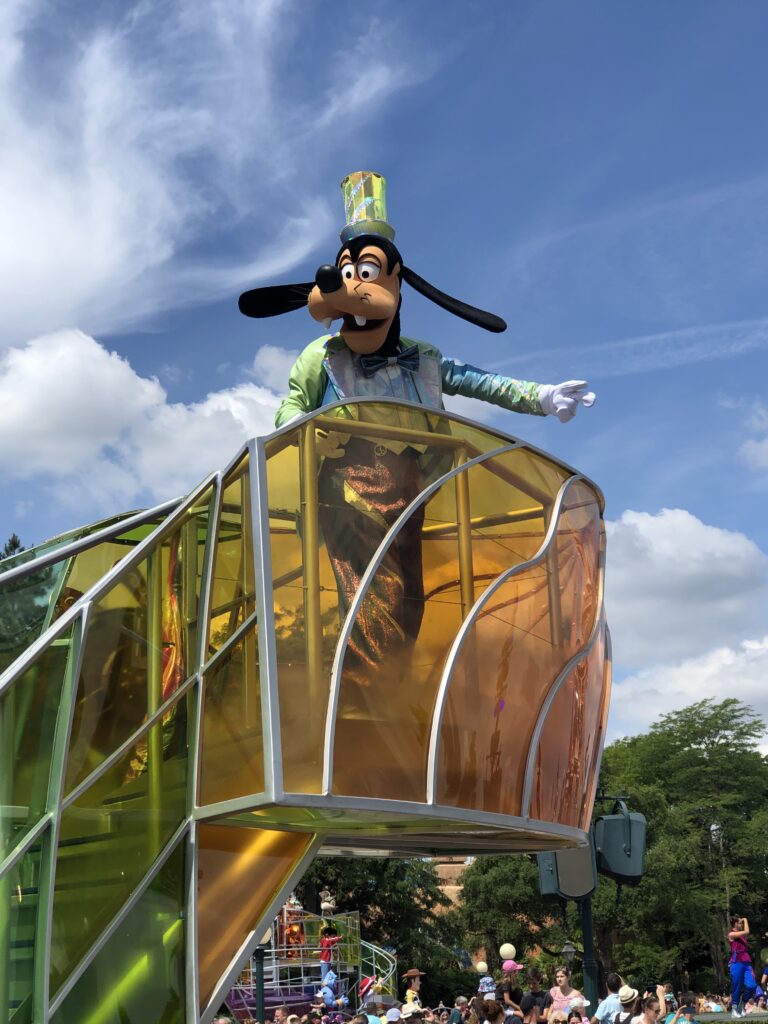 But I did wonder if the usual parade was also happening. Despite research on the app and the internet, I couldn’t find out. Eventually, on our last day, a staff member told us that the 30 year anniversary parade was on three times a day and the main parade was on at 5pm. Sadly, we had to be at the railway station by 5pm, so we missed it. 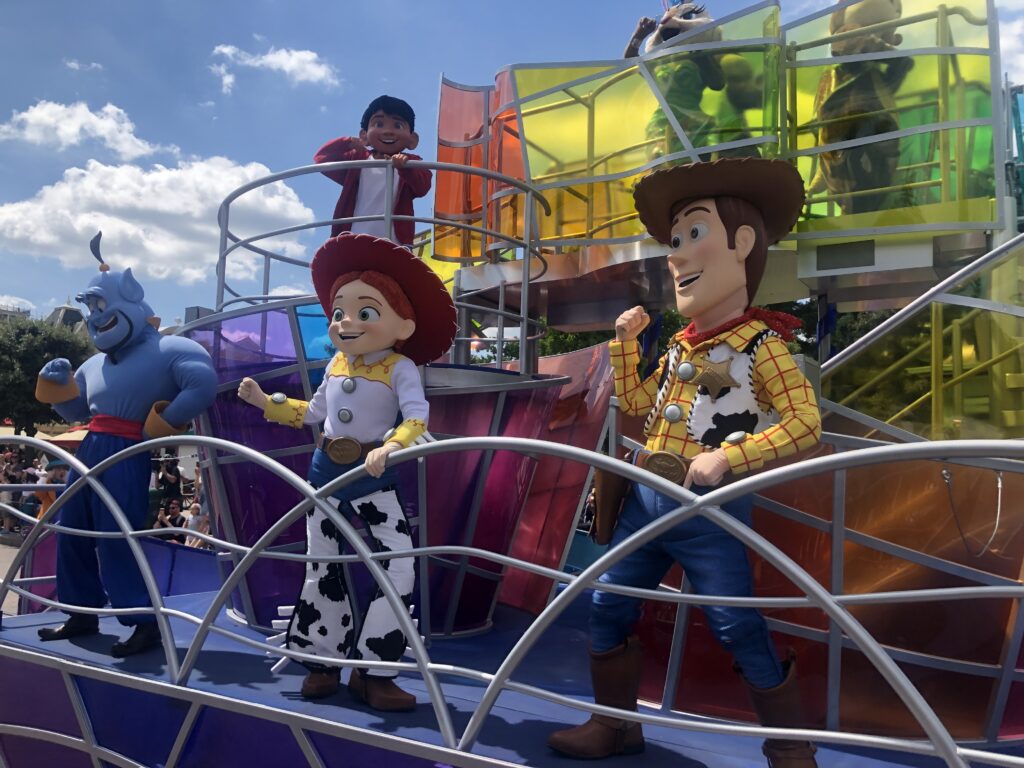 I’m not sure if the times vary depending on the season, but I would definitely recommend checking the times either before you go on holiday or when you first arrive, so that you don’t miss it too!

The other, even more spectacular thing, at Disneyland Paris is the night time fireworks. These happen at 11pm above Sleeping Beauty’s Castle and they are STUNNING. We’d never seen them before, because our kids were much younger last time we went. (Although the crowd is full of toddlers and very small children!)

People start sitting on the pavement for them at about 9.15, which seems a bit crazy when you think that fireworks are in the sky and therefore visible from everywhere. But not everything is in the sky. Ideally, you want to be able to see the whole of the castle, as well as the fountains. Of course other people get in the way, as do things like trees, so there is some logic to bagging a space early. Needless to say, I didn’t sit on the pavement from 9.15. I got myself in position at about 10.30 on the second night, because I’d been stuck half behind a tree on the first night. 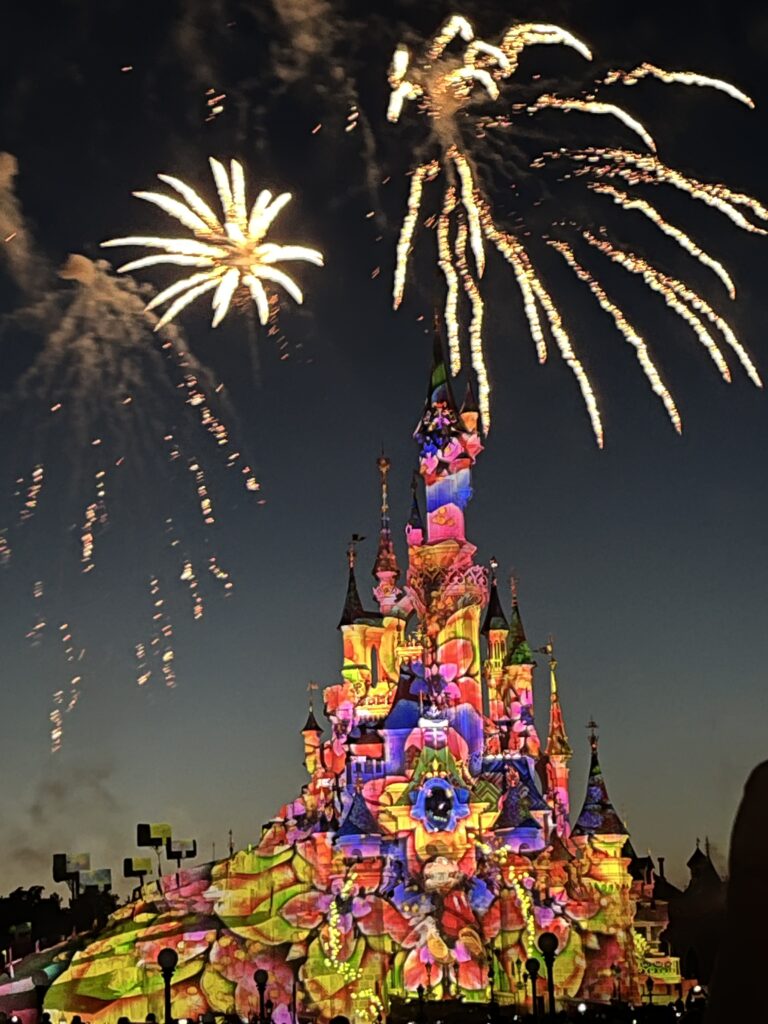 The fireworks are set to music from the films and the castle is essentially a big projector screens which is constantly changing with a series of Disney images and scenes. Sometimes, the fountains light up and shoot up in the air in time with the music. 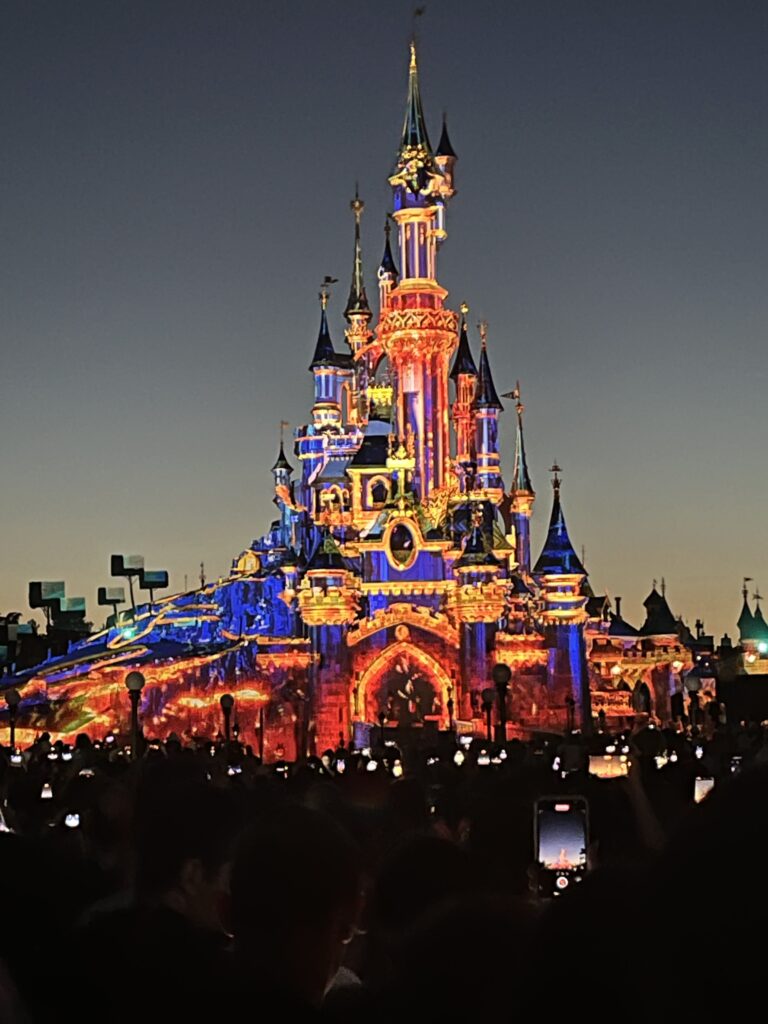 As this was the 30 year anniversary, there was also a special 30 year display, which used drones to mark out the 30 logo in the sky. It was absolutely incredible. An American lady we met in the Eurostar queue, who visits both Disney World in Florida and Disneyland in California several times a year, told us that Paris does the night time displays far better than the American parks. 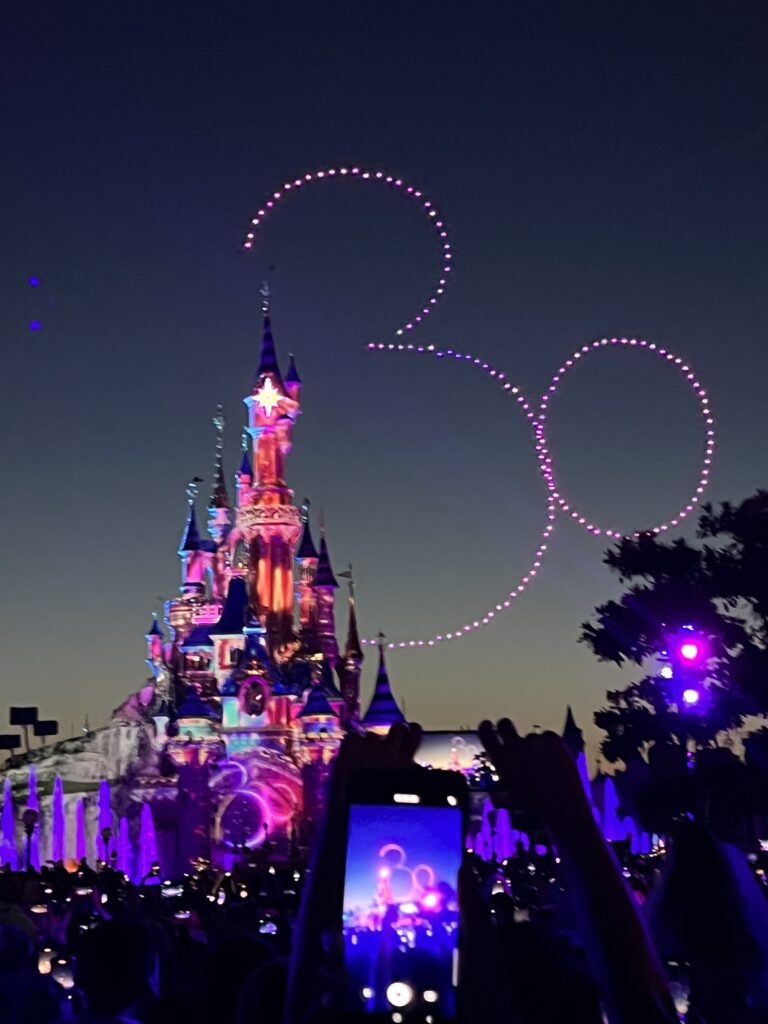 If you want to pack everything in and you’re only there for two or three days, the days at Disneyland Paris are long and tiring. It was at least a 15 minute walk from our hotel (Newport Bay Club) to the entrance to the park. Clearly, if you want to pop back to the hotel to rest at any point, you’re adding in extra walks, which can be exhausting in the heat. It’s tiring enough just with one teenager. If you’ve got two or three little kids with you (as we once did), it’s knackering.

The big advantage families with small children have over families with teenagers is that little kids get up early! So you can get up and out and enjoy the park and the rides before it gets too busy. We had big plans to enjoy the magic hour (8.30-9.30am when the park is only open to hotel guests, not outside visitors), but we had to contend with teenage sleep patterns. My daughter isn’t one of those teenagers who sleeps until 2pm, but you also can’t force her down to breakfast at 7.30am when she’s on holiday. The only way we managed the magic hour on the final day was by going to the park for an hour before breakfast, before going back to the hotel for a late breakfast.

When we went to Disneyland Paris back in the day, breakfast was provided in the hotel. So we naively assumed that would still be the case. Then, about a month before we set off, I was looking at the app and realised that it wasn’t actually provided any more. You can pre-pay food packages at different levels – breakfast only or breakfast and dinner etc. This seemed like a good idea, so we booked a food package for breakfast and dinner. Then we simply had to book dinner at one of the 31 restaurants available.

Bearing in mind that this was a month before departure, not one of those 31 restaurants had any tables!

So we switched our food package back to breakfast only. 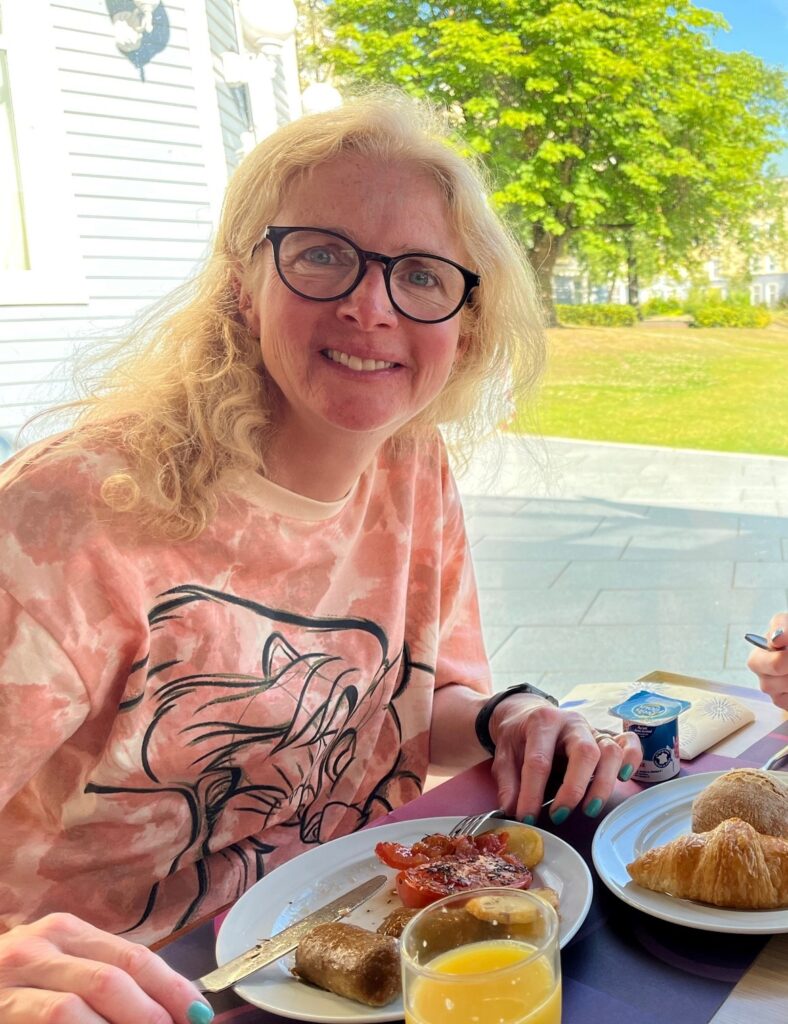 Having breakfast in the hotel is a pleasant experience and there is a huge selection of hot and cold food to choose from. But it cost 28 euros each per day. On the first day, my daughter had two pieces of toast with Nutella. I’m not a huge eater of breakfast either. If we ever go again in future, we might just do McDonald’s breakfast instead.

To be honest, McDonald’s was a bit of a godsend. On the edge of Disney Village (an area outside the park which is full of restaurants and bars), it was the closest eating place to our hotel and had much more competitive prices than elsewhere. It’s not easy to find a vegetable at Disneyland Paris, so if you’re going to be eating burgers and chips anyway, you might as well just eat McDonald’s, which is at least reasonably priced.

I would like to see more easily accessible healthy food at Disneyland Paris. I know a lot of people have the ‘we’re on holiday, it’s a treat’ view of eating, which is understandable. But that doesn’t work for me. I’m a vegetarian with IBS and I can’t do more than two days of ‘bad’ eating. Even two days is a struggle, to be honest. I made sure to eat some fruit at breakfast, but then it was downhill all the way.

Oh, and we didn’t need the food package. We were able to walk into places and eat. Whether it would have worked out any better value with the food package, I’m not sure! Either way, eating at Disneyland Paris is very expensive.

It’s even difficult to fill up a water bottle, as the two taps in the best position – just by the entrance to the park – were out of order while we were there. Every day for us started with a search for taps to fill up several water bottles.

But these are all fairly minor whinges, which are personal to me. The fact is, we had a brilliant time at Disneyland Paris and I would really like to go again. Although I fear the next time we do, we may have grandchildren in tow… 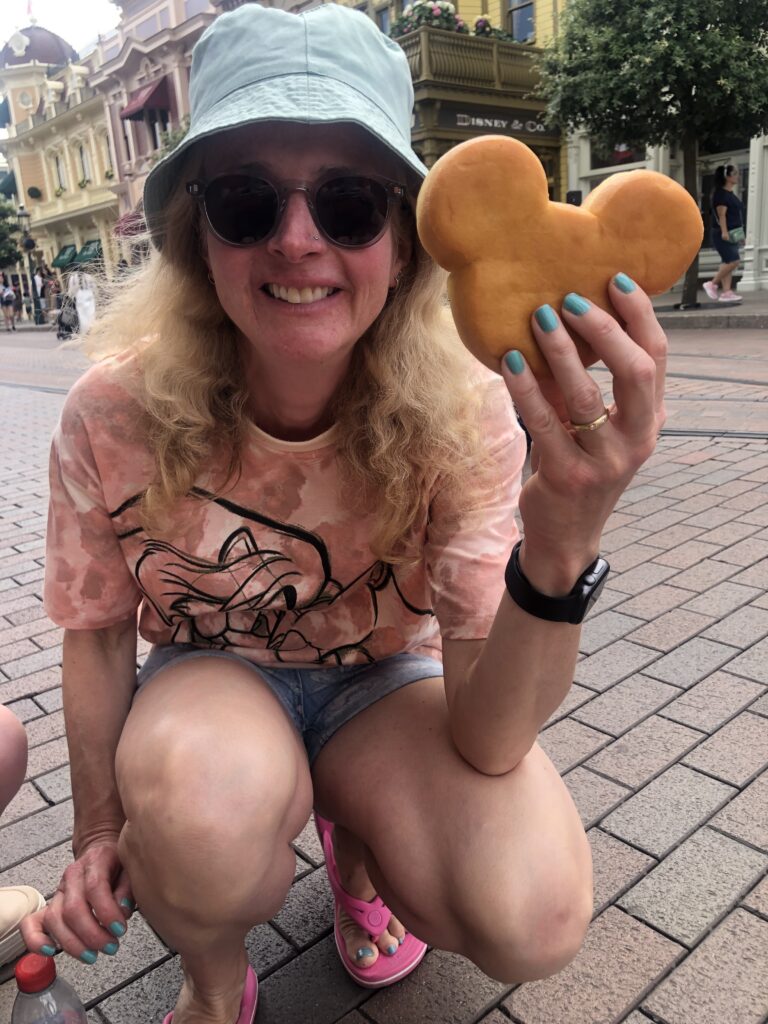