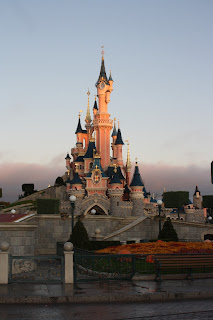 We’ve been to Disneyland Paris five times. My lucky eldest child went three times in very quick succession. We were enchanted by the magic (as Disney would no doubt say) when he was 15 months old, so we went back just before his 2nd birthday, when I was pregnant. A year later, just before his 3rd birthday, we went back with his baby brother, aged eight months.

We love Disneyland Paris. I think only the most hardened cynic wouldn’t. Of course it’s mainly for kids, but for me that’s what holidays are about – taking pleasure in your children’s enjoyment and happiness.

So what’s so great about it? To me, it’s just perfect. It’s so BELIEVABLE. You’re not in Paris or France. You’re in Disneyland. It really could be anywhere, because it’s like a different world.

One of the best things, possibly the best thing, is meeting the characters. Minnie and Mickey are the ultimate. The look so real. One glimpse of them and grown adults lose all their senses and start running after them. Even the lesser characters, like characters from Pinocchio or Robin Hood, get everyone excited. Every child (and plenty of adults) want an autograph and photo with them.

I have vivid and happy memories of meeting the characters with no queues and no hassles back in the day. The park was quiet and the characters wandered around freely. Last time we went there were no characters wandering around freely. They were at special meeting points and you had to queue to see them. Although they did wander around freely in the expensive hotel I was lucky enough to be staying in! And they all took the time to have a laugh, joke and dance with the kids as well as the obligatory photo and autograph.

A really good way to meet the characters is to have a meal with them. Cafe Mickey is more expensive than some places, but the food is better, and characters wander round meeting and greeting as you eat. The atmosphere is brilliant. Food is completely forgotten as kids constantly get up and down to hug and photograph Mickey, Minnie, Goofy and Pluto. Everyone is so happy and excited. It’s what a holiday at Disneyland is all about.

The main Disneyland park is divided into four distinct areas, or lands, and each has its own character. The favourite is Fantasyland. That’s full-on Disney cuteness. Bright colours, Alice in Wonderland, Peter Pan, princesses – you get the picture. The rides are aimed at younger children. They’re the sort that I really like myself!

When my son was little we spent hours on It’s a Small World. It’s a boat ride through the world with cute characters and this catchy tune that will stay in your head for days. Now they’re all big, they didn’t want to go on it the other week. But I insisted. It brings back such special memories. And I’m pleased to say they all really enjoyed it.

Discoveryland is all about space. But it’s a kind of late 19th/ early 20th century view of space. Historical futuristic, if that makes any sense. The big ride is Space Mountain – a rollercoaster in the dark. I haven’t been on it since the very first time we went to Disneyland Paris because I always have to wait with the kids. The boys were both big enough to go on it last time, but they both bottled it. Buzz Lightyear’s laser blast is great fun for all the family – shooting ‘bad toys’ with laser guns in the dark.

Adventureland should appeal to older children with the Pirates of the Caribbean and Indiana Jones rides. It’s got a sort of Arabian Nights feel to it. Frontierland is a sort of Wild West America. The main ride is Big Thunder Mountain – a runaway train ride. My daughter thought this was literally the best thing ever. My younger son found it terrifying.

There is also the separate Disney Studios park, which is of more interest to older children and teenagers. It has grown massively in the years we have been going to Disneyland. A new addition is the Toy Story Playland, which is beautiful. It appears to be constructed completely from toys and is mainly suitable for very small children. (Although why a 2 year old would want to be dropped from a great height by a parachute is beyond me – it terrified me!)

There is a big range of rides, suitable from babies upwards. There aren’t many rides toddlers can’t go on. At 8, my younger son is big enough to go on everything and at 5, there’s only a couple of rides my daughter can’t go on. (Much to her disgust, she is so much braver than her brothers.)

The queues for the rides can be quite shocking. If you want to avoid them or reduce them, you can get fast passes. These allow you to come back at a certain time and get (almost) straight on. I think you can only have one fast pass at a time, so you can’t get one for another ride until you’ve been on your first one.

The shops are wonderful. Like the Disney Stores here only loads better. Yes, the stuff is expensive, but only the same as it would be here. They have every market cornered. There’s plenty of merchandise to appeal to teenagers as well as toddlers. My daughter saved for the best part of the year to buy her big Minnie Mouse and she has rarely been as happy with anything in her whole life.

So that’s the good side. What’s the bad side?

The food. The cost. The queues.

The food at Disneyland Paris is crap. And it’s over-priced crap. There are some ‘proper’ restaurants, which probably serve proper food, but they are very expensive, so most people are forced into eating the junk. There IS a McDonalds on site, which helps save money as the prices are just McDonalds prices. If you’re going to be eating junk food anyway you might as well eat competitively priced junk food.

The holiday costs a lot in the first place. I can live with that. You pay for it up-front, then you forget about it and move on. But then you get there and it’s still expensive. There’s the food, but there’s also the bits and pieces kids pester for. A pair of Minnie ears (which many people wear) is 9 euros 90, so I’m calling that a tenner. You can get an amazing face paint job. For 12 euros. Why would you even bother?

For some rides you can queue for up to 75 minutes. I don’t think anything is worth that. And, it has to be said, certain European nations don’t really respect the concept of queuing. We Brits will wait patiently, and then someone will let 12 members of their extended family in. I was particularly annoyed when we were watching the parade. We’d been waiting for 20 minutes and had a reasonable spot. Then a French woman shoved her son, who was bigger than my younger boy, right in front of him.

If you want my advice, if you are lucky enough not to be tied to school holidays, go for it! That way you can avoid the queues and really relax and take in the atmosphere.The Eurostar goes right into the park and under 3s travel free on it. Why do you think we took my son days before his 3rd birthday?! Two free kids! Bargain. Let’s be honest, the only one you’re going to get.