Tewkesbury half marathon – hanging in the balance

Home » Family » Tewkesbury half marathon – hanging in the balance

Tewkesbury half marathon 2022 takes place on 14th May – six weeks after Manchester marathon. Obviously it would be no problem for me to run it. My husband, sister and brother-in-law are all running it too and we’ve been looking forward to it.

I’ve run Tewkesbury twice before. In 2018, it marked a big comeback from injury and I got a PB. Remarkably in 2019, I ran it only a week after my first marathon, so I took it a bit carefully and ran at a 9 minute/ mile pace. I signed up for 2020 as soon as I could, but of course it didn’t happen. And nor did 2021. So you can see why I’ve been looking forward to it.

But they hurt more afterwards!

After a race – marathon or half marathon – it always takes me until Thursday for my legs to recover sufficiently to run. This time it was Friday, and they still didn’t feel great. But I ran 10 miles on the Sunday, four miles the following Tuesday and six miles the following Wednesday. By which time, a slight niggle in my hip was becoming quite painful. So I used ice on it and didn’t run again until parkrun on Saturday.

After slowing my parkruns down while marathon training, I was looking forward to speeding up. But I only managed 25:20 – not much faster than I’d run while training. The next day was Easter Sunday, so we’d planned to just run four miles, then do our big run on Monday.

The original plan for Monday was 13 miles, but we’d decided to just go for 10. My husband had gone into Manchester marathon injured and he was still struggling too. His problem had been his calf, but he was feeling pain and discomfort in various different parts of his leg.

Soon after we started our 10 mile run, his knee started to hurt. My hip was hurting too, but I didn’t like to mention it. In a strange way, I feel that if I don’t mention it, it’s not actually real. I thought I would just keep running and it would ease off.

I can count on the fingers of one hand the number of times I’ve stopped running over the years. It’s something I never do.

So we went home after two miles and I promised myself that I would rest until parkrun, five days away. I would also use ice on my hip twice a day. (Admittedly most days I only managed once a day, but at least I was doing it.)

I was still absolutely convinced that I would run Tewkesbury half marathon, and so would my husband.

On parkrun morning, three weeks before the half marathon, I suddenly realised that I might not run it. Of course it doesn’t matter and I would tell that to anyone in the same situation. It’s really foolish to run on an injury and potentially make it worse. I’d been telling myself that I would get some physio after the half marathon and rest it if I needed to, before getting back to full strength. Not only was the injury uncomfortable, but it had really affected my pace too.

Maybe I needed to get the physio before the half marathon instead?

It felt uncomfortable at first, but on the whole it felt better than it had the previous week.

I managed an eight mile run the next day. With three weeks until a half marathon, I would usually be running 12 or 13 miles for my weekly long run, but eight miles was better than nothing. Again, it was a bit uncomfortable and slower than I would have liked, but at least I was running.

My next challenge was to make it through a week of normal running. A normal week of running for me is three midweek runs – two four mile runs and a six mile – plus parkrun (5k/ three miles) on Saturday and a long run on Sunday – usually 10 miles.

There was still a bit of discomfort and I was still lacking pace, but the discomfort was reducing and the pace was increasing a little bit.

My husband isn’t recovered either, plus my sister and brother-in-law are both struggling with injury too.

Tewkesbury half marathon was definitely hanging in the balance, but I think we are all going to manage it. I won’t be breaking any records. If I manage it in two hours, I’ll be happy (I generally run a half marathon in around 1 hour 50 minutes).

We will all just get out there are see what we can do. 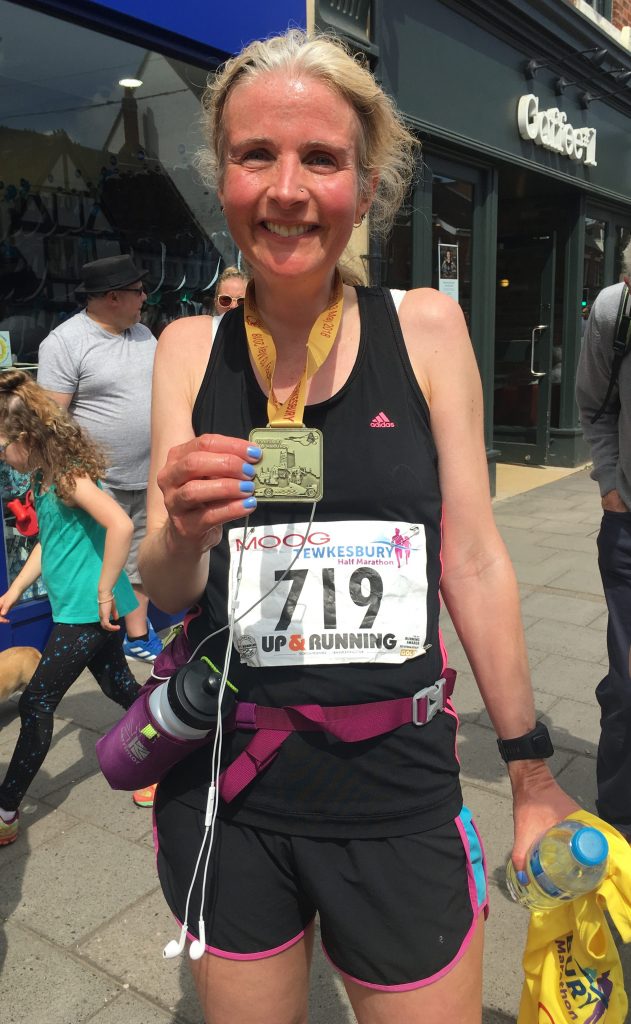 Tewkesbury half marathon in 2018