Life with a puppy

Home » Family » Life with a puppy

As a family, we are complete dog novices. None of us have owned a dog before and neither my husband or myself grew up with dogs. We went into puppy ownership with our eyes wide open and we have a lot of love to give. But it is hard!

We knew having a puppy would be hard, but we probably didn’t know quite how hard.

I am reassured every day by the people who tell me how rewarding it is and the many people I see out walking their perfectly calm dogs.

Hetty the cockapoo (or cockerpoo) has turned our lives upside down. Apparently this is what puppies always do.

Everything we do is puppy proofed. We are constantly closing doors and picking things up off the floor. Because if there is a way for her to get somewhere she shouldn’t or pick up (or eat) something she shouldn’t, she will find it.

I could play with her, of course, but I did have to work. I felt a bit trapped. At the end of the second week, I realised what I was feeling.

It was postnatal depression.

I’m not even joking and I’m not belittling postnatal depression. That’s exactly how I felt.

There were four members of the family who wanted a dog, but the others were free to come and go. They were out at work and school. The kids would come home, say hello to Hetty for a couple of minutes, then retreat to their rooms to look at their phones. I was left in the kitchen, trying to juggle all of the usual tasks of everyday life with the additional unpredictability of a puppy.

I say ‘unpredictability’, but I could always predict that she would poo under the table as soon as I started cooking. She could go outside for 10 minutes, then come inside and immediately go to the toilet under the table.

Hetty is very keen on ‘helping’ us clear up her messes. If it’s not bad enough having poo on your kitchen floor, it’s made harder by trying to clean it up with a dog’s nose in your way.

There is a wonderful invention called puppy mats – disposable mats for them to wee on. Obviously going outside is always the first choice, but puppy mats are a good alternative. For the first few days, Hetty was very good at using the puppy mats. But then she discovered how much fun they were to shred and there was just no point putting them down any more. So she took to weeing on the kitchen floor.

Hetty sleeps a lot, but she hears the slightest movement. As soon as a door or cupboard or the dishwasher opens, she is there! So I’m left with the recycling piling up on the side because I can’t put it out during the day. Her favourite place to try to get to is the utility room aka the most dangerous room in the house. That’s where the bin, the food waste caddy and the washing machine are. We also have various cupboards out there. I’d never realised how often I need to go out there, until I had a puppy trying to get in there, sniffing around and grabbing stuff.

At times, I wonder how she will ever survive to adulthood. If she’s not eating stones, leaves, cobwebs or whatever else she can find, she is shoving her head silently into a closing door. She seems pretty resilient, but I can’t help worrying about her.

But just like a newborn, you’re so excited about them. You can’t stop talking about them and you want to show them to EVERYONE. And everyone wants to see them.

Despite the hard stuff, having a puppy is a joy. It’s lovely to see her chasing round the kitchen after a ball, to have her come to me for affection and to sit stroking her.

Hetty loves chasing round the garden or the kitchen after a ball. But we realised the best way to distract her and play with her is to give her something out of the recycling. She’s never happier than when she’s chasing a toilet roll or plastic bottle. Plastic bottles move very fast and make lots of noise, which she seems to love. (Don’t worry, we remove the lids and recycle the bottles as soon as they show any sign of damage.)

My daughter has always been wary of dogs, so to see her picking her up without being afraid is wonderful. And my husband is just brilliant with her. Having a puppy seems to have given him a whole new lease of life. Nothing seems to be too much trouble for his ‘baby’. Even my eldest, who didn’t want a dog, enjoys playing with her.

When we’d had Hetty for nearly a month, something amazing happened. I realised I felt HAPPIER. Not happier than I’d been a week or two ago, but happier than I’d been for a long time – long before we had a puppy. For all her chaos and mess and biting, she has given us love and fun and happiness, and we wouldn’t be without her.

And the good news is, she’s now fully jabbed and can finally go out for walks – albeit short ones, as she’s still very young. She loves walks and I love getting out of the kitchen! 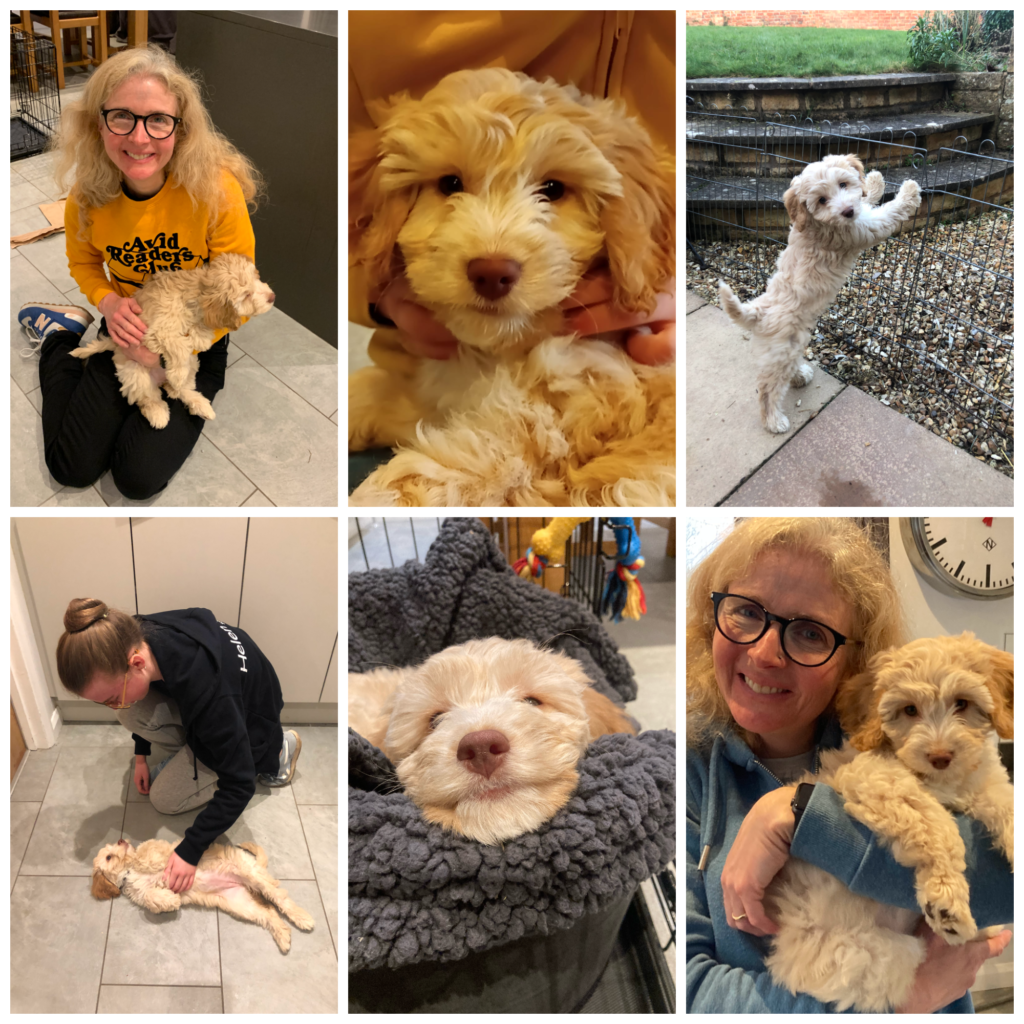