Everyone said owning a puppy was exhausting – and they weren’t wrong!

After a week of puppy ownership, we felt like we’d had Hetty the cockapoo (or cockerpoo) forever. We also felt very tired. And a little bit stressed.

The drive home with her was scary, as she was crying a bit and we didn’t know how to make it better. We stopped the car twice on the way and I ended up driving, with my husband sitting in the back with her.

When we got home, we introduced her to her bed and toys inside in her crate. Her crate would be her safe space and hopefully she would be happy to sleep in it. She very quickly started taking her ball back there, which was a good sign.

We gave her a tin of puppy food and she hoovered it up. The instructions said they should have two to 4.5 tins a day – and the breeder had told us she would need feeding four times per day.

Then she started whining. We’d been told to ignore whining. But then my husband discovered she’d been sick – in her crate and on her bed and blanket. I’ve got a vomiting phobia, so this wasn’t ideal for me. Fear of a dog being sick was another reason I’d never been keen to have one before. My husband did a very good job of cleaning up.

In the meantime she got her first visitors – my sister-in-law, followed by my parents, sister, brother-in-law niece and nephew. They all brought her presents. Who knew presents for a puppy was a thing?

We’d been warned that puppies cried at night. But the breeder told us that she’d heard from her brother and sister’s new owners that they hadn’t cried. The plan was for Hetty to sleep in the hall under the stairs – which is just outside our bedroom. We put her to bed with a sheet partially covering her crate to help differentiate between night and day.

She went to bed at 11.30pm. At 12.05 she started whining. She whined for a bit, so I took her for a wee. And then she started crying and howling. I had no idea a little dog could make so much noise. It went on and on. I was worried it would be disturbing the kids, so my husband went upstairs and told them to close their doors (we never close doors in our house). Then he moved the crying puppy into our room.

The noise! It felt like I was trapped in hell.

At 12.55, my husband said I might as well sleep in the spare room, as there was no point in both of us being awake. So I went to the spare room, closed the door and eventually got to sleep. I was rudely awakened at 3 to take Hetty for a wee in the garden. Then I struggled to get back to sleep, before being woken by my alarm at 6.

I found my husband and Hetty already in the kitchen. They’d been there since 4.40. My husband went back to bed until 8.

For most of the first week, I felt stressed. It seems crazy to say it, but it was a very similar feeling to when my dad was very ill in hospital with Covid. I couldn’t sleep well, I was struggling to eat and I was losing weight.

On the second and third days, Hetty became more lively. We had to change the way we do pretty much everything. All doors were closed at all times. Shoes were put away immediately, as her favourite things were shoes, slippers, feet, socks and ankles. She wanted to bite them all the time! We had a strict ‘no biting’ rule, but she kept trying.

I always work in the spare room upstairs and my son works in the kitchen and dining area. But Hetty would be in the kitchen and dining area in the day and he didn’t want the responsibility. (Ironically, he loved dogs as a child, but was the only family member not to want one.) So I started working in the kitchen, and he worked in my daughter’s room because, allegedly, the wifi isn’t good enough in the spare room or his own bedroom. While I worked, Hetty spent most of her time literally under my feet. 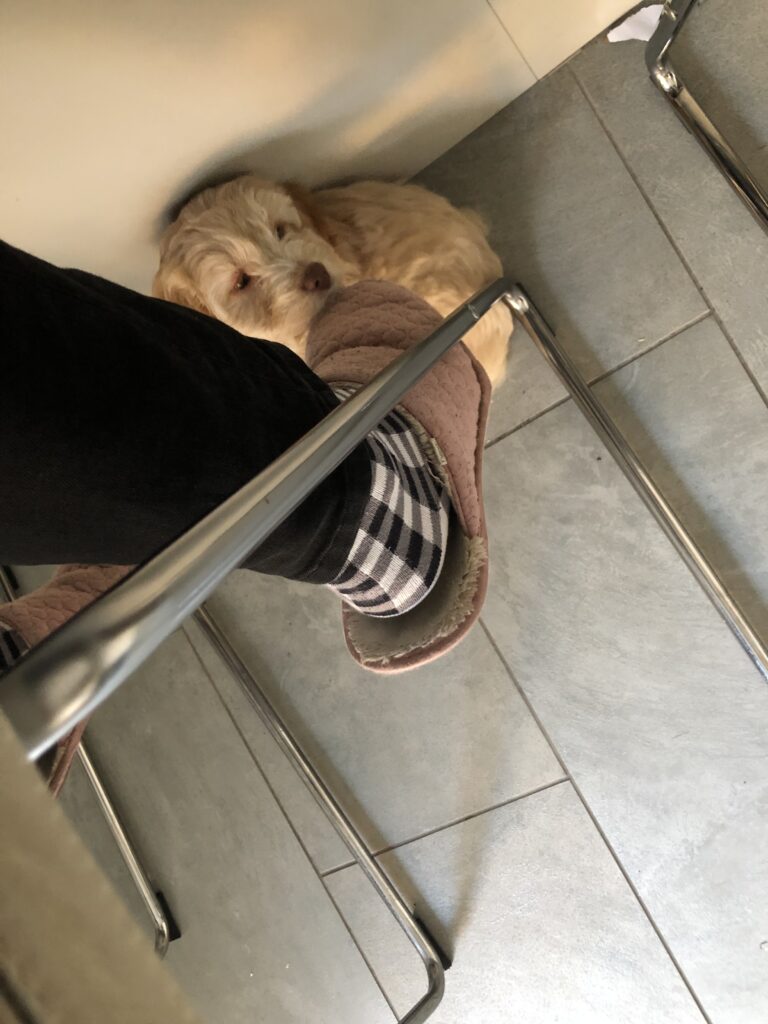 Right from the start, Hetty was pretty good with the toilet. I took her outside regularly and said ‘do wee wees’ and she usually did. We had puppy pads in the kitchen and sometimes she would just go on those (she wouldn’t ask to go outside for a wee). Although sometimes she would just shred the puppy pads up. She didn’t think poos had to be done outside, so even though I took her out after every meal, she usually did those on the kitchen floor! And she likes nothing better than getting in the way as I try to clean up.

After the first night, we came up with temporary sleeping arrangements. Hetty was shut in our bedroom in her crate, my husband slept in the spare room and I slept in with my daughter. It meant we couldn’t really hear her crying! By the third night she was definitely crying less.

In the first few days, Hetty had two modes – full-on playing and biting or asleep. There was a small in between mode, where she would trot around the kitchen after me from sink to fridge to cupboard, and sit on my feet every time I stayed still for more than a second.

There were times I would go outside and talk to my guinea pigs and think ‘What have we done?!’. Guinea pigs are so much easier. But by day 3 or 4, I realised I wouldn’t change her for the world. My husband actually missed her when he was at work.

On day 3, he said: ‘I’m glad we didn’t hesitate’. By this time, the breeder had only one puppy of seven left. If we’d hesitated, we wouldn’t have got our chosen puppy. No doubt all puppies from that breeder and any other breeders are very similar, but Hetty was our puppy, and he didn’t like the idea that she could have ended up with someone else.

On day 4, I became anxious about how much Hetty was sleeping in the day, but realised she needs 18-20 hours’ sleep a day. I guess she was still settling down on the previous days, so was awake more. She carried on sleeping a  lot after that, but she was WILD when she was awake.

Apart from the night crying, the hardest things to deal with were the endless biting of slippers, socks and ankles and her attempts to ‘help’ clear up after an accident in the kitchen. It is very difficult to wipe up when the kitchen roll is half in a dog’s mouth.

Talking off accidents in the kitchen – I was carrying a bowl to the sink on day 6 and she got under my feet. I had no idea she was there and properly tripped over her – hurting us both. I landed very heavily on both knees and my arms slammed into the cupboards. Somehow I managed to get my bowl to land in the sink without breaking, but it did break another bowl in there.

On night 6, Hetty slept through! She went to bed without crying and didn’t cry when I took her back to bed after a wee at 2.30. I first heard her crying at 6am.

At the end of the first week, the love of a puppy was far outweighing the stress. I felt like we really had a pet who was going to be happy with us. I was eating normally and sleeping a lot better. Life will never be the same again, but it is certainly easier than it was just a week earlier. 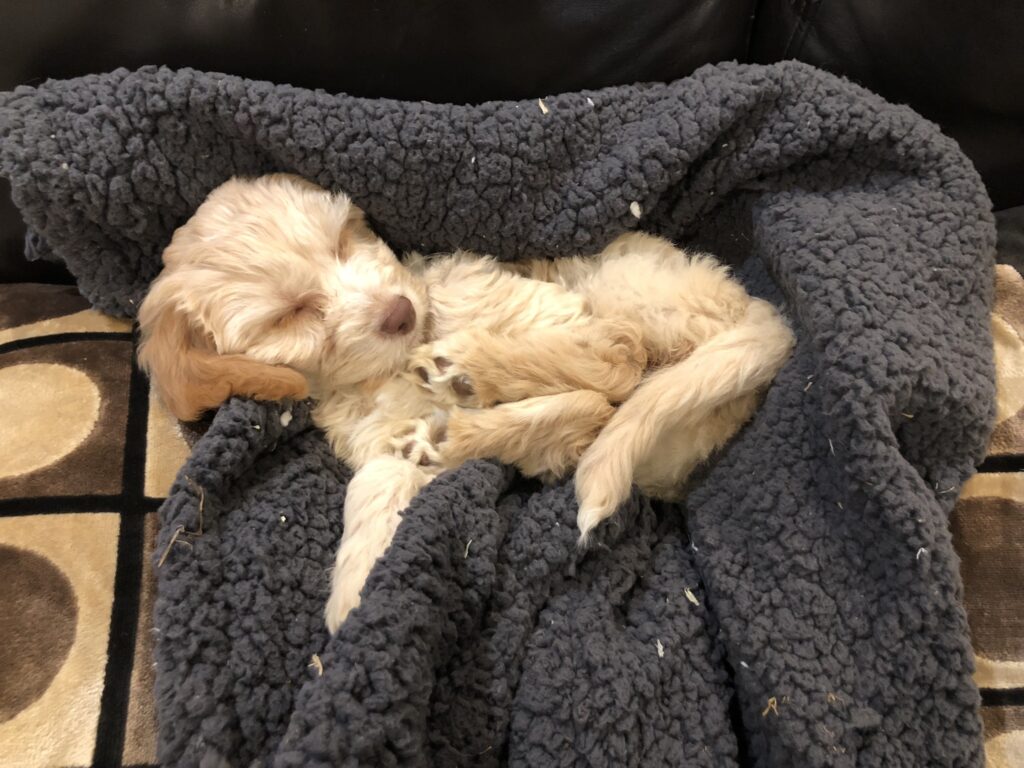