My son recently came 5th in the under 20 men’s long jump at the England Athletics Indoor Championships in Sheffield. He came 10th in the same competition in the under 17s category in 2020.

We couldn’t have been happier or more proud of his recent achievement, especially as he’d had a rather shaky start to the indoor athletics season.

There are nowhere near as many indoor athletics competitions as outdoor ones – simply because there aren’t actually that many indoor venues. So it’s often necessary to travel a long way to compete. My son knew he had to get a couple of competitions in before the Indoor Championships. At the end of January, we went to Lee Valley in London for the London Indoor Games. We were all very excited and had high hopes for it.

Just over an hour before he was due to compete, he realised he was there on the wrong day! We couldn’t easily travel home and back again the next day and we couldn’t get a hotel as we had a puppy at home. Luckily, the organisers were kind enough to let him jump with the women. As an open competition, he was only really competing against himself.

But the experience had rattled him and he had no time to warm up.

His first jump was a no-jump. As was his second jump.

My son NEVER does no-jumps.

We blamed it on the mix-up and thought he would do better at his next competition – another open, this time in Loughborough.

He arrived at the right time and jumped against the right people. And he did do a bit better. But not much better.

Technically, he only recorded two no-jumps and four jumps. But one of the jumps was taking off on his left leg and one of them he took off so far before the board that he deliberately walked out of the front of the pit – which makes it a no-jump, so it wasn’t measured. He jumped a 6.32 and a 6.42 and he came third.

I must admit, I was a bit worried. He’s got a friend who literally recorded no-jumps all last season (until the last competition of the season, when he nailed a 7.09) and I didn’t want him to get stuck in that rut.

He’d been doing some different training. Maybe it wasn’t right for him? He’s also built up a lot of muscle. Maybe it was too much muscle?

On the plus side, it did look like most athletes were 40 or 50cm down on their PBs at the start of the indoor season.

But my son was positive and confident. He knew exactly what he needed to do for the National Indoor Championships.

In any competition which isn’t an open, everyone gets three jumps and only the top few (top eight at the National Indoor Championships) get to jump another three. He had to do a good jump in his first three! We knew he could do it, but would he stop doing no-jumps?

We were surprised to see him jump first, as he wasn’t first on the running order. I was just over the moon to see he’d recorded a legal jump. But it was only 6.33.

At the end of the first round, with the exception of one lad who’d recorded a no-jump, he was lying in last place.

We knew that would be enough to get him the extra jumps.

And he’d smashed the indoor club record at both under 20s and seniors in the process. He now knows that the senior record is secure for at least this indoor season, as none of the other jumpers are competing. The under 20s record should be safe for many years to come.

My son’s coach went along to the competition and I was very grateful to him for writing down every single jump of every single athlete. He knew what position my son was in and who wouldn’t be going through for the next three jumps.

My son’s third jump was a 6.80, but his place in the top eight was secure. He was lying in sixth.

His fourth and fifth jumps weren’t as good, but nor were anyone else’s. They all remained in the same positions.

On my son’s sixth jump, he pulled a 6.87 out of the bag, moving him into 5th place. That was 1cm further than he jumped at the English Schools National Championships last year, where he came 4th.

To come 5th was a massive achievement, especially given his shaky start to the season.

We now know how much he needed to make those mistakes and have that shaky start before the National Indoors. Now he’s got ambitions to do even better at the end of the indoor season… 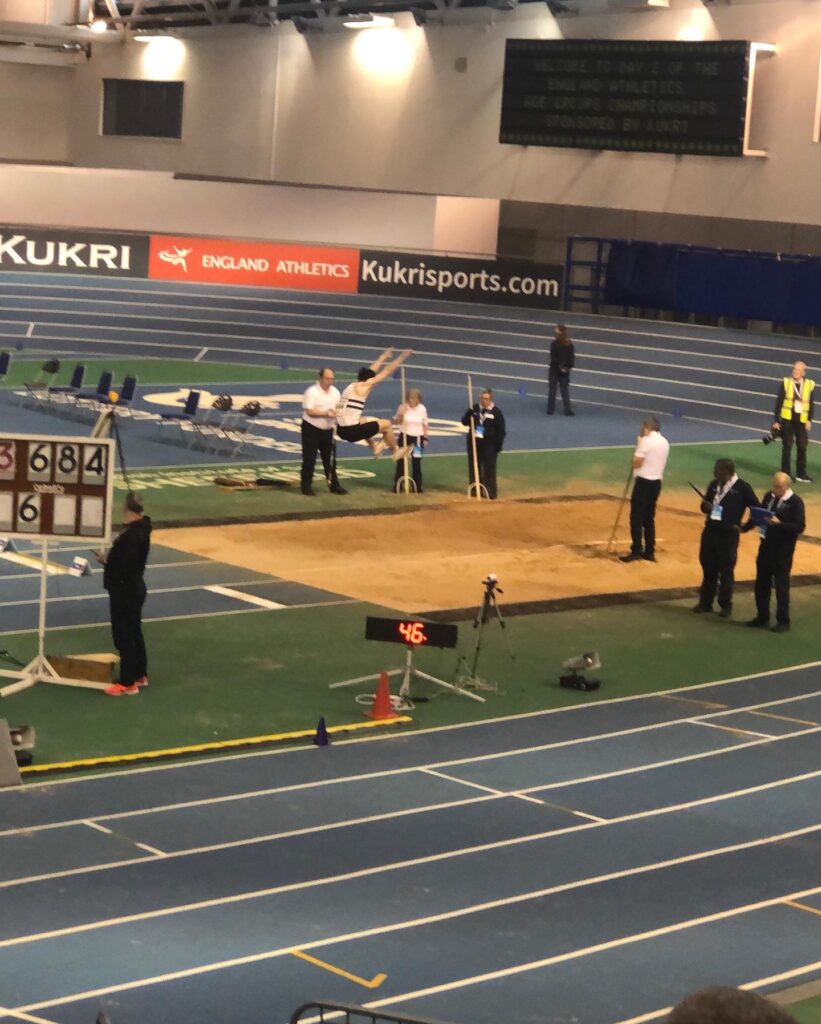