It’s over 18 months since my dad turned 70. For his birthday, we gave him a token present (which he loved) and the promise of a trip to Leicester City in the near future. My dad is a big Leicester City fan and brought all his kids up to be Leicester supporters too.

We hoped to get him good tickets or maybe even tickets with a bit of hospitality or a nice meal thrown in. But we couldn’t get anything. It was close to the end of the 2014/15 season and everything was sold out. But that was fine. We would get something for the following season. At the time they were at the very bottom of the Premier League and it looked like the following season would be in the Championship.

But then we all know what happened, don’t we?

Having managed a run of wins to keep themselves in the Premier League, Leicester entered the 2015/16 season as relegation favourites. But then they started winning games. It was a fluke, of course. It wouldn’t last. They could never win the league.

But they were at the top of the league for nearly the whole season. Even in the spring nobody believed it could really happen. But it did. Leicester won the Premier League.

Imagine trying to get tickets for games in a run like that. It just didn’t happen. We lowered our expectations from ‘nice tickets’ to ‘any tickets’. But it was still impossible. Everybody wanted Leicester tickets and being a fan for over 60 years didn’t make my dad more likely to get them than anyone else.

But when Man Utd (my husband and kids’ team) won the FA Cup, we came up with a new plan. Maybe we could get Community Shield tickets? It would be perfect. Our team versus their team.

And we got them! My husband and kids got tickets at the Man Utd end and my dad and I got nicer tickets in Club Wembley – where fans are mixed and there may be a few neutrals there too.

Rather than drive all the way to Wembley and get stuck in a car park for hours, we drove to Beaconsfield and caught the train to Wembley. As a claustrophobic, I was nervous about this as I thought it would be horribly crowded, but it wasn’t at all. We all got seats and were able to sit together.

My dad had seen Leicester at Wembley a few times in the 90s – a couple of play-off finals and a couple of league cups, but he’d never been to the new Wembley, so it was lovely to be able to take him. It truly is a stunning building and I still love to see it, even though I’ve been a few times.

Once at the stadium, we took a few photos and then went our separate ways. You’re not allowed to wear team colours at all in Club Wembley and my poor dad had his 50 year old Leicester City scarf confiscated, even though it was in his bag and he had no intention of getting it out. Luckily, he was able to get it back at the end with no stress at all. 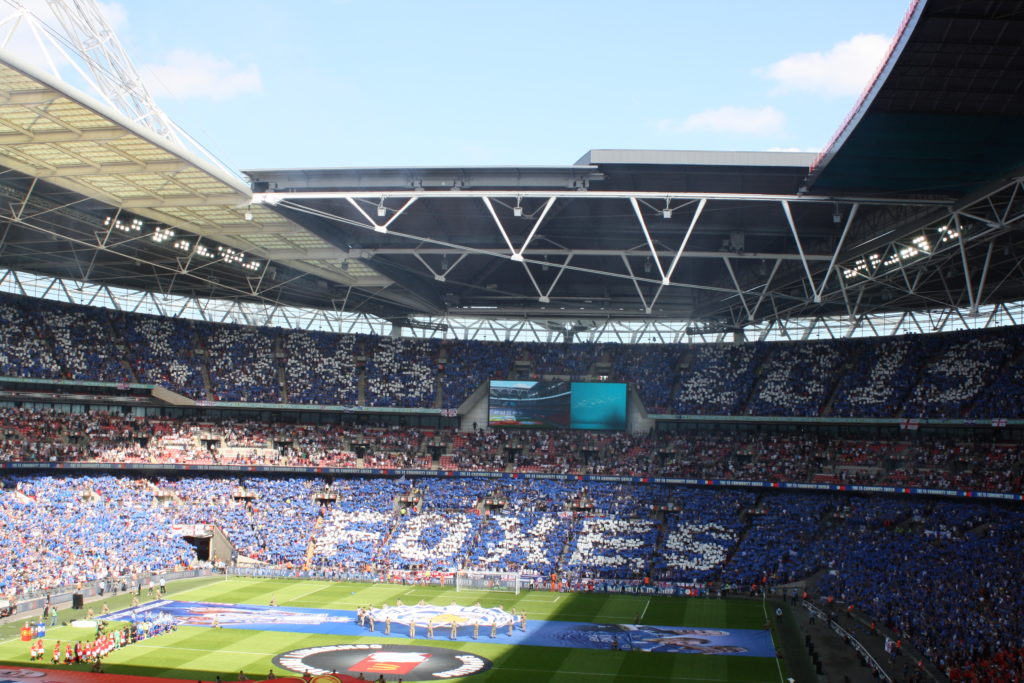 We arrived in the stand an hour early, but the time flies as there’s lots going on on the pitch – mainly with large flags coming on and off and fireworks going off. I also love watching people’s faces on the big screen, especially when they suddenly realise they’re on it!

Finally, the game kicked off. I’ll be honest, I’m not the best at understanding football and sometimes I miss things. Also, being behind one goal meant it was quite hard to see the finer detail of the action in front of the other goal. But it looked like a fairly evenly matched game, with Man Utd maybe playing slightly better.

It was great to see players like Vardy and Mahrez in the flesh. And even some of the Man Utd players too – you don’t live with a houseful of fans without picking up a little  bit of allegiance to the team.

Towards the end of the first half, Lingard scored for Man Utd, which was a slightly sad moment, but I didn’t think the game was over or that Leicester had lost it. Interestingly, on the TV they said the goal was against the run of play, which I hadn’t thought it was (proving I don’t know much about football).

I’m pleased we were treated to a classic Jamie Vardy goal at the start of the first half, which raised the spirits of the Leicester fans. Then stalemate for a long time. There’s no extra time in the Community Shield, only penalties and it looked the game was heading that way. Until Ibrahimovic scored for Man Utd in the 82nd minute. Damn!

So it wasn’t quite the dream birthday present for my dad, but it wasn’t far off. We’d seen our two teams play each other at Wembley and we’d had a lovely day.