Driving lessons and driving tests during a pandemic

Home » Family » Driving lessons and driving tests during a pandemic

As any parent of older teenagers (and definitely the older teenagers themselves) will tell you – getting driving lessons and driving tests during the pandemic hasn’t been easy!

There are plenty of year 13s who wanted to learn to drive as soon as they turned 17 who haven’t yet passed their tests. Many have had them rescheduled endlessly. Then there are year 12s who turned 17 a while ago who are on long waiting lists for a driving instructor and haven’t had a single lesson. And, even if they have had some lessons, they can’t get a test until October. (Around here, at least. It might be sooner or even later in other areas.)

Driving lessons and driving tests were of course banned during all three national lockdowns. This time round, lessons came back on 12th April, with tests allowed from 22nd April.

My son turned 17 at the end of October 2020. My husband, who is endlessly patient with learner drivers, took him out driving on his birthday. By the time he had his first lesson a week later, he’d been out driving with my husband four times and was able to drive from our village, through the next three or four villages and back again. He was even tackling roundabouts!

I can’t remember whether he had one lesson or two before November lockdown kicked in.

Luckily, he’d had the foresight to book his theory test for December. Because you can’t book your actual (practical) driving test until you’ve passed your theory test. And there was a really flipping long wait for driving tests even then, so the sooner he got his theory test, the better.

He passed his theory test first time and booked the first possible driving test he could get.

There was no question that he would be ready for his test by then.

My boys seem to have an aptitude for driving (inherited from their dad, obviously – it took me 35 lessons to pass). My eldest passed his test after just three months and we were sure that my younger son could do the same. If lessons had been able to continue as normal and there had been no backlog of tests, I have no doubt that he could have passed his test by February.

My son squeezed in about four lessons between the November lockdown and the big lockdown three.

Then there were no lessons for over three months.

Initially, even driving with parents was banned. This was adjusted pretty quickly, and learners were allowed to drive for essential journeys eg shopping. My son did at least one ‘essential journey’ every week throughout February and into March.

He wasn’t the only one. I know that you always notice learner drivers more when you have one in the family, but I have never seen so many teenagers driving parents’ cars as I have over the last few months (like my friend Stressy Mummy). There are 17 year olds who have never taken a single lesson and 18 year olds who were ready for their tests months ago. All of them practising, all of them waiting, until they can finally get to drive properly.

With the roadmap for lifting lockdown, we were worried that driving lessons wouldn’t be allowed until 17th May. If that was the case, my son would lose his 12th May test and have to apply for the next available date – in October. He was lucky that driving tests were allowed again from 22nd April. Between 12th April and 12th May, he had five lessons.

He was so ready for his test. He drove calmly and his observation was incredible.

I was sure he would pass first time, but there is always that ‘what if?’. Normally you would just think that it’s OK if they fail because they can just try again in a month. But when they can’t try again until October, there is a lot riding on it.

(There is an app where you can look for cancelled tests, but who is going to be cancelling a test? Even people who aren’t really ready are taking them on the off-chance that they pass, because they might as well risk it rather than know they will have to wait another five months.)

My son was very calm about his driving test, but I was a nervous wreck.

We know that, under Covid rules, if someone commits a major error – which means they fail their test – they have to drive straight back to the test centre. In non-Covid times, the examiner will see out the full duration of the test.

It was pretty late by the time he got back.

“What should have happened,” said his instructor.

He’d passed first time after a handful of lessons. As we knew he should, and his instructor knew he should. He’d got just five minor faults – you can get up to 15 minor faults without failing. Under normal circumstance, he wouldn’t have even got those faults – two were relating to pulling up too far from the kerb. If you hit the kerb, that’s a major fault and you fail. It’s understandable why he would err on the side of caution.

So my son’s instructor has freed up space on his books for another student and my son won’t be hogging a second test that someone else desperately wants. But this backlog is going to last for a long time.

If you’ve got a 16 year old who is desperate to drive, get in touch with an instructor now. Because otherwise there could be a long wait! 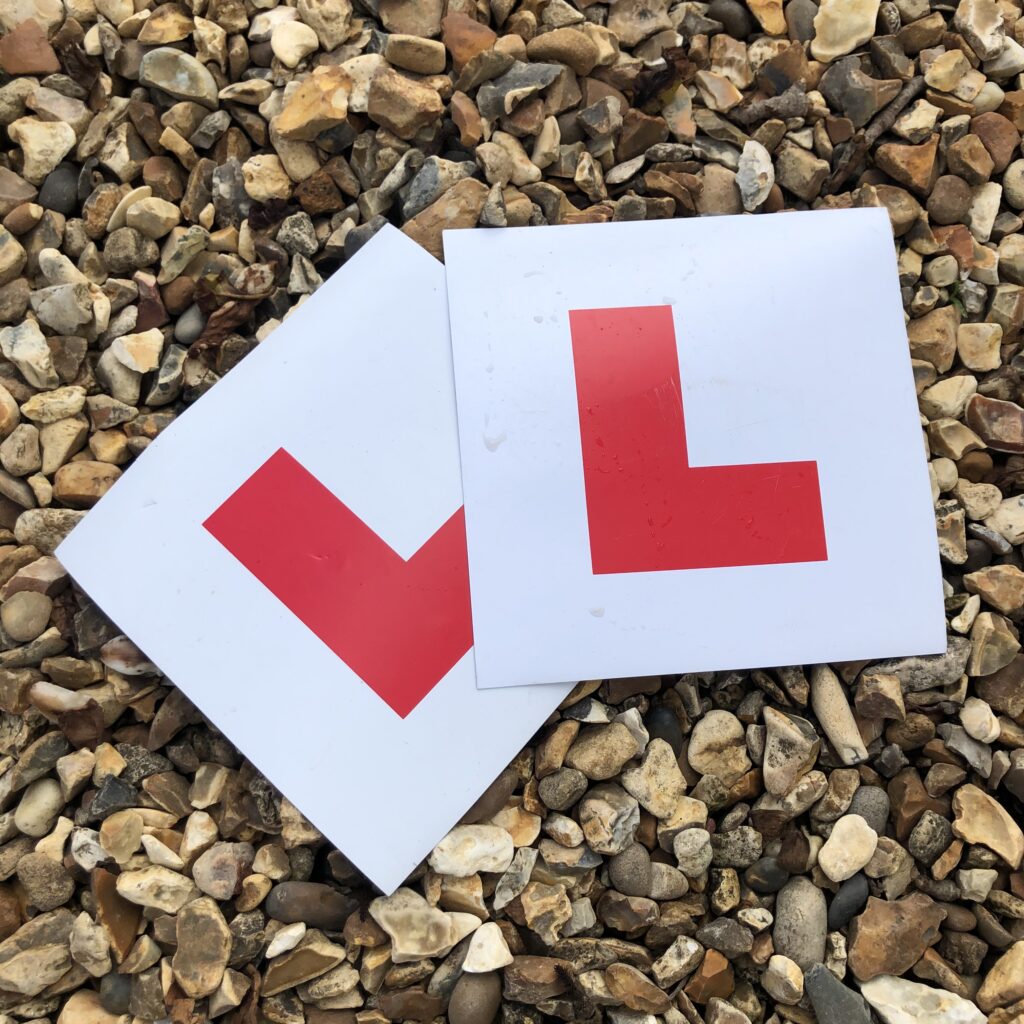 We won’t be needing these again for a while!