Way back at the start of the year, before everything went wrong, I remember walking with my son and talking about athletics competitions. After a difficult season last year, when he’d broken his pelvis, he was looking forward to a good final year in under 17s. He’d done three indoor competitions in the winter and was getting back to form.

And then coronavirus happened.

Then the league competitions were cancelled for the year and so were the school competitions. School remained closed, as did the stadiums and tracks. He was going to lose his entire season.

At this point, I should probably explain how the age groups work in athletics competitions… Each age group covers two years, rather than one like in most sports. And the word ‘under’ really means UNDER. So under 17s is when you are 15 and 16 ie years 10 and 11 at school. This is unlike most sports where ‘under’ just means ‘the year you turn that age’. So under 16s football is year 11 football and by the end of the season the majority of the players will have turned 16. To make matters worse, the athletics age group after under 17s is under 20s, which covers three years – ages 17, 18 and 19.

So you can see why a 16 year old would really want to beat his PB and break some records in under 17s, because under 20s is going to be a real step up for him.

My son has spent the last few weeks checking all of the clubs within a two hour radius for competitions. If one opens up, the long jump is full within seconds. Usually they will only take six long jump competitors in total (across all age groups) because of the Covid-19 guidance. Some clubs will understandably only take competitors from their own club or their local area.

Since June, my kids have been doing sprints training in the park with their coach and a small group of other teenagers. A few weeks ago, the coach just casually dropped into conversation that he thought there were competitions in Nuneaton. Competitions?! This was the first they’d heard of them.

Nuneaton is a town in Warwickshire, about 60 miles from us. It is also quite special to me, because it is where my parents came from and both sets of grandparents lived. I haven’t been there for many years.

They were running ‘open’ competitions (ie anyone can enter, you don’t need to qualify) – each one focused entirely on a particular event. Sadly, there were no jumps. But there were different races. So my son signed up for a 100m competition. He had to give his PB with his entry. As his PB was recorded in about year 8, he put himself down for 12 seconds. 12 seconds is pretty quick, but it’s nowhere near getting on the national rankings for his age. (He ranks nationally in both long jump and triple jump.) 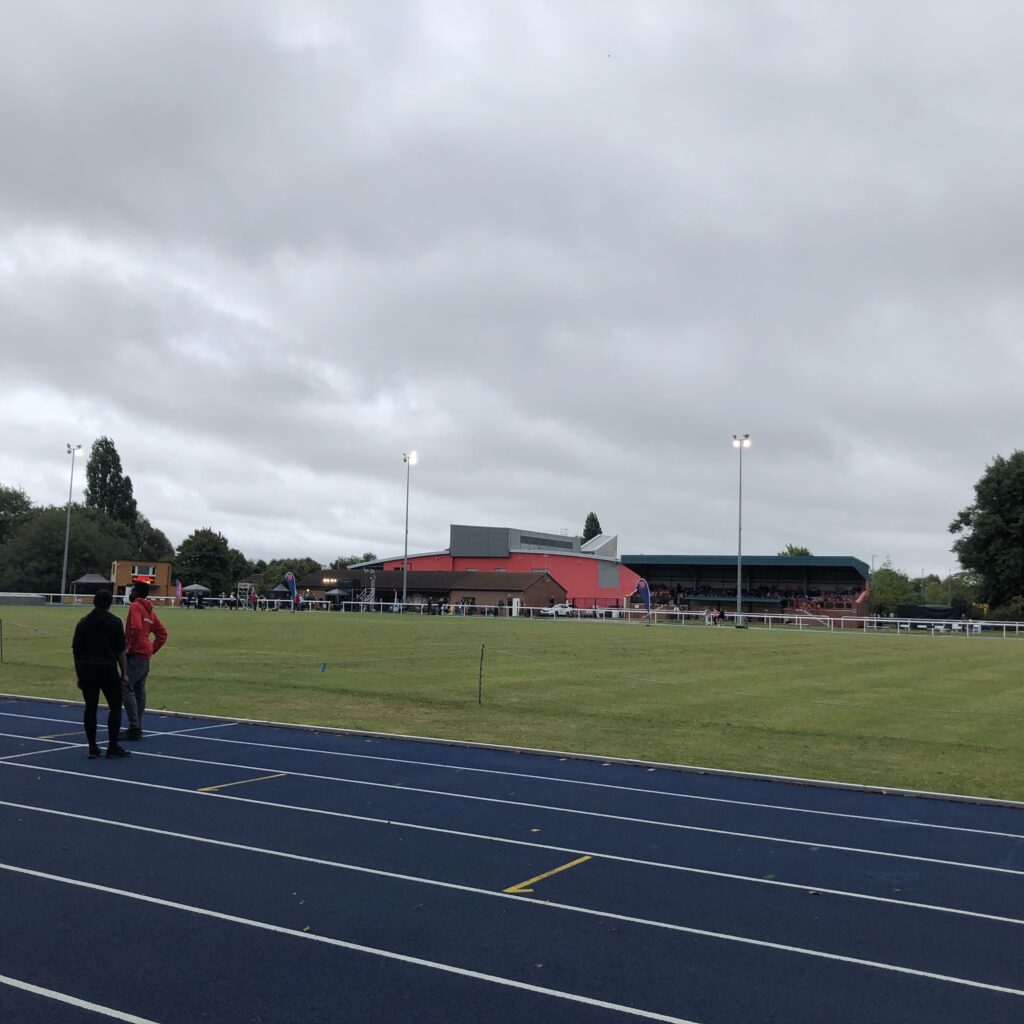 It was so nice to be in a stadium environment again! Even though we didn’t know the place or any of the people, it felt so good. They were restricting entries a bit, you had to leave your details for track and trace and you had to sanitise your hands, but it all felt pretty normal. Stadiums are good places for social distancing – they are outdoors and there’s plenty of space to spread out.

I looked at some of the competitors and I felt they looked more like sprinters than my son. We watched some of the races before his (which meant they were theoretically slower than him) and they were SO FAST. Was he really going to be as fast as that? Had he estimated his time wrong?

He looked quite small on the start line. Compared to most boys of his age, he’s tall. But compared to athletes, he’s on the small side. There were just four people in his race – another boy of his age, a senior man and a veteran man. They were very quick, but my son was very quick too. It really is incredible how fast someone can run 100m.

My boy who isn’t a sprinter came second. He would have liked to get below 12 seconds, but he was very slightly above.

It was great to be back at an athletics competition, but the clock is ticking towards the end of the season and the end of his age group and he still hasn’t jumped!