I picked up I Am, I Am, I Am by Maggie O’Farrell because it was the June read for Clare Mackintosh’s Facebook book club. I wouldn’t have ever considered reading it without that encouragement, but I’m so glad that I did. Regular readers of my book reviews will know that I LOVE Clare Mackintosh. I’ve been a member of her Facebook book club for a few months and had never joined in with the monthly read until last month, which happened to be Where the Crawdads Sing, which I had read quite coincidentally a few weeks previously. It was nice to join in with some of the discussions on Facebook, so I thought I would take the plunge and buy I Am, I Am, I Am too.

I read a Maggie O’Farrell book YEARS ago, probably around the time my sons were born (my eldest is 19 and my younger son is 16). I can’t remember what it was or what it was about, but I do remember that I enjoyed it and it was well written.

I Am, I Am, I Am is not a novel – and I like to read novels about 90% of the time. It is a sort of autobiography, but based on 17 (yes, SEVENTEEN) near-death experiences. That is a lot of near-death experiences for one woman to have – especially when I worked out she is the only same age as me (OK, I’m no spring chicken, but still.. ).

I Am, I Am, I Am is basically a series of short stories. I don’t like short stories generally, but I was hooked right from the start. It is a very easy read, but also well written and very atmospheric. The stories vary in length, but most of them are very quick to read. Some are more ‘near-death’ than others eg the Aids test was probably never a real risk of death. Many of them though are definitely near-death experiences. Between the late 70s and the noughties, Maggie O’Farrell nearly drowns, suffers a terrible case of dysentery, a very dangerous labour and a lot more besides. Every one of the stories has plenty of context to paint a picture of Maggie’s life at the time – including which country she was living or holidaying in, what job she was doing and her family set-up at the time.

She saves the best until last – the two last (and longest) stories are HEARTBREAKING. There is the story of the childhood illness that nearly killed her at the age of 8 and there is the one and only story which isn’t her own – that of her daughter.

I would never have picked up I Am, I Am, I Am without the encouragement of the Facebook book club, but I am so glad I did. It is a wonderful read and I would recommend it to anyone. 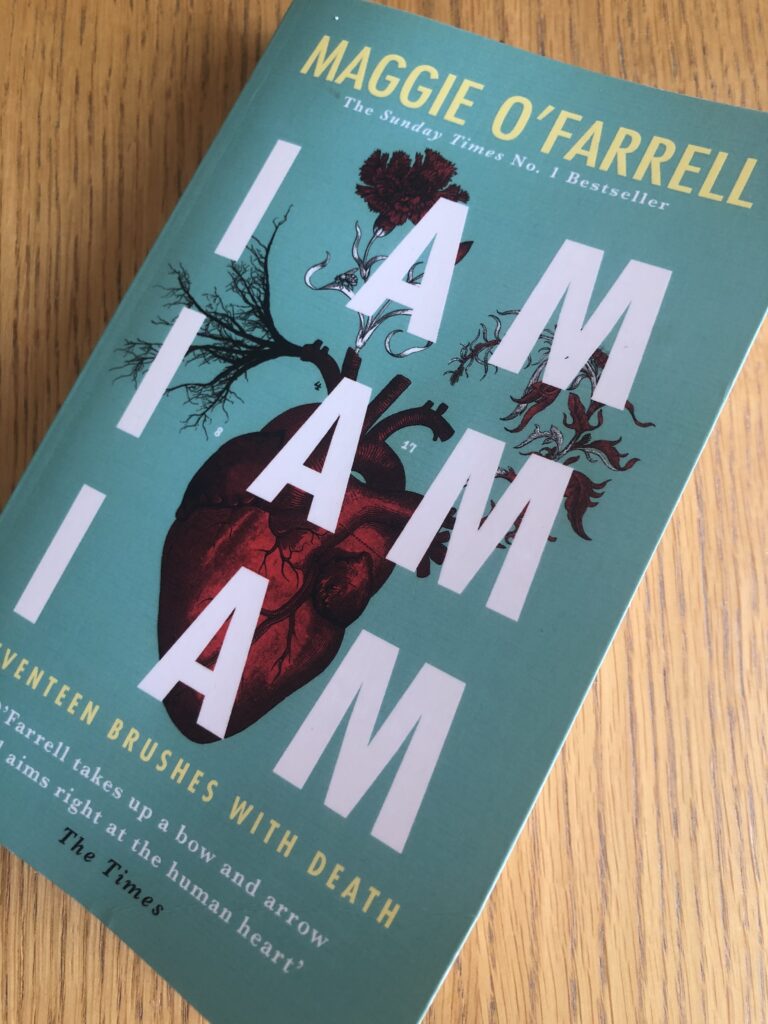