A few months ago, my mum gave me some writing from my uncle, all about my Grandad – partly my uncle’s own memories and partly family history research. I shared the first part earlier this week and you can also read my own memories of my Granny and Grandad here. This post is all about my Grandad and World War II. I’m not sharing my uncle’s writing word for word, as they are not my words to share, but I will share the gist of it.

In the 1950s, my Grandad would have appeared to be one of the people who had survived the war unscathed, but these things are never quite how they seem…

Grandad was called up as soon as World War II broke out in 1939, when he was 22. He joined the Royal Marines. Like so many others of his generation, he spoke very little of his experiences in the war. But my uncle was eventually able to piece together his travels during the war – Deal and Plymouth; Tripoli and Cape Town; The Gulf and the Suez Canal; the Mediterranean and the invasion of Sicily. It was in Sicily that he heard World War II darling, Gracie Fields, sing.

Grandad was transferred back to the UK and the Royal Marines training base in Scotland early in 1944, in preparation for D-Day. Shortly after returning, he was diagnosed with malaria. Ironically, malaria probably saved his life. He was in hospital for much of the remainder of the war and missed taking part in the Marines’ frontline role in the D-Day landings.

He knew he was a fortunate man to have survived both the war and malaria, but he found it hard to forget those who were less fortunate. And early in 1945, came news of the death of his beloved younger brother.

Grandad and his brother (the second and third of four boys) were born not much more than a year apart. Their eldest brother lived with their grandparents and their youngest brother was born five years later, so they were very close. Like Grandad, his brother was conscripted at the outbreak of war. He joined the Worcestershire Regiment and was in one of the first battalions sent to the Belgian Front in 1940. On the retreat to Dunkirk, he was captured by the Germans and became a prisoner of war.

He remained in a large POW camp in the Polish town of Torun until 1945. There were 10,000 prisoners of the camp, 4,000 of whom had been captured at Dunkirk. The camp was evacuated in January 1945 and the prisoners sent on a long march during one of the coldest Eastern European winters of the 20th century.

My Grandad’s brother died in Germany on 14th March 1945 – 500km east of the camp. The family was always told he’d died of flu. The reality is he almost certainly died of a combination of malnutrition, exhaustion and frostbite, having marched every day for two months across a frozen wasteland. He was buried first in a local cemetery and moved in 1948 to the British War Cemetery in Berlin.

Talk of the uncle that died in the war wasn’t uncommon when my mum and uncle were children (he died just six months before my uncle was born), but the children were saved from any detail. It is hard to imagine how his parents and my Grandad coped with the fear and uncertainty, followed by the grief, of these years. They would never see my great-uncle’s headstone.

His mum smoked 60 cigarettes a day, his dad ended his day’s in a mental hospital and my Grandad was devoted to his mum’s welfare. World War II had left scars on all of them. These experiences would have stayed with my Grandad for the remaining 60 years of his life. 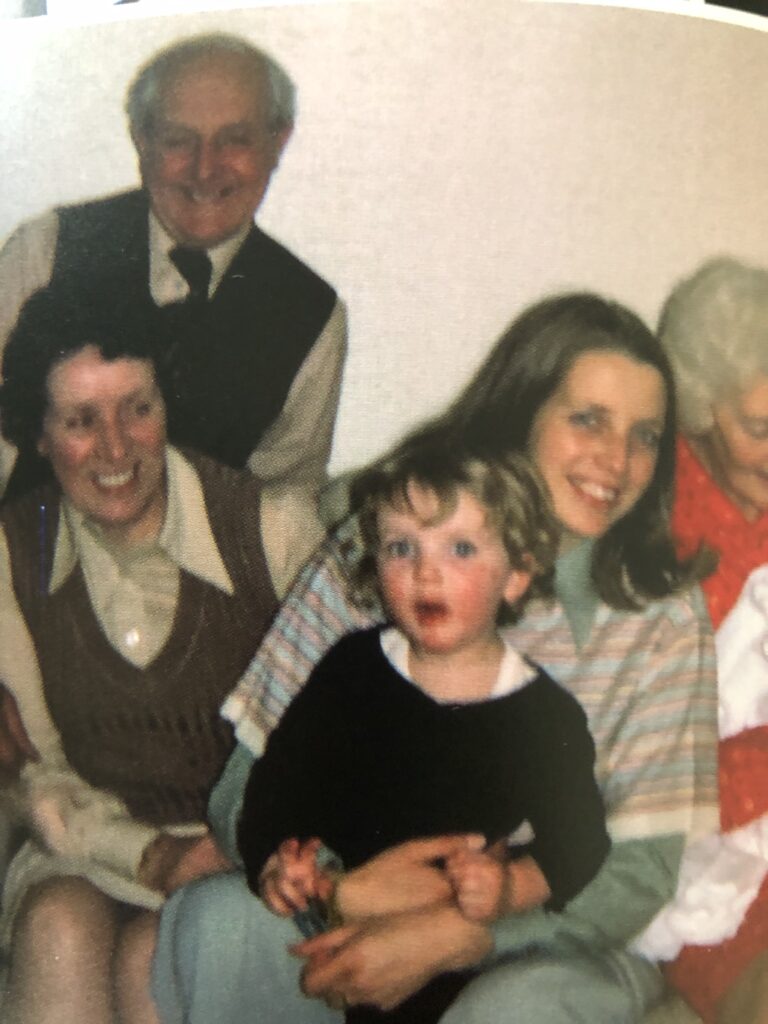 Granny and Grandad with my mum and me in 1976