A few months ago, my mum gave me some writing from my uncle, all about my Grandad – partly his own memories and partly family history research. I’ve been meaning to share it on the blog for a while, but then our lives got over-run by lockdown. I’m not sharing it word for word, as they are not my words to share, but I will share the gist of it.

My Grandad was the second of four brothers born in a village close to Nuneaton – where both of my parents were born and grew up. He was born in 1917 and survived the Spanish flu epidemic of 1918 that we have heard so much about lately. He left school at 14 and went to work at a factory eight miles away in Hinckley. He would cycle there and back every day. His dad was a miner and, like many miners, was determined that none of his sons would go down the pit. Apart from the war, my Grandad spent his whole working life on the shop floor in the textile industry.

Grandad wa a quietly spoken and modest man. He was always smartly dressed. You would hardly ever see him without a tie. His trousers had a perfect crease and his shoes always shone. He cleaned the whole family’s shoes every night. My uncle believes this was partly a legacy of his time in the Royal Marines during World War II.

Although quietly spoken, my Grandad had strong views and grew up surrounded by politics – at election time the front room of the family home became a Labour Party committee room. Coming from a mining family, the words ‘bloody Tories’ became all one word. Even after the war, Churchill was a hated figure for mining families.

Grandad didn’t read books, but always know what was going on in the world. He was an avid reader of newspapers and always had the radio on, tuned in to news and sport. As a child, I remember my Grandad literally holding the radio up to his ear to listen. Throughout his life sport, particularly football and cricket, were his greatest passion. As a young man, he would cycle to see his favourite teams play – Leicester City for football and Warwickshire for cricket. In later life, I remember him volunteering at his local cricket club and going to watch Nuneaton Borough play football.

Grandad passed his love of sport on to his son, my uncle, who in turn passed it on to his own sons. Grandad did a deal with Granny that he could keep watching his sport as long as he took my uncle with him. My uncle remembers trips by bus or train to away games – usually tucked away among back streets of terraced housing.

Next, you can read about my Grandad’s experiences in World War II. 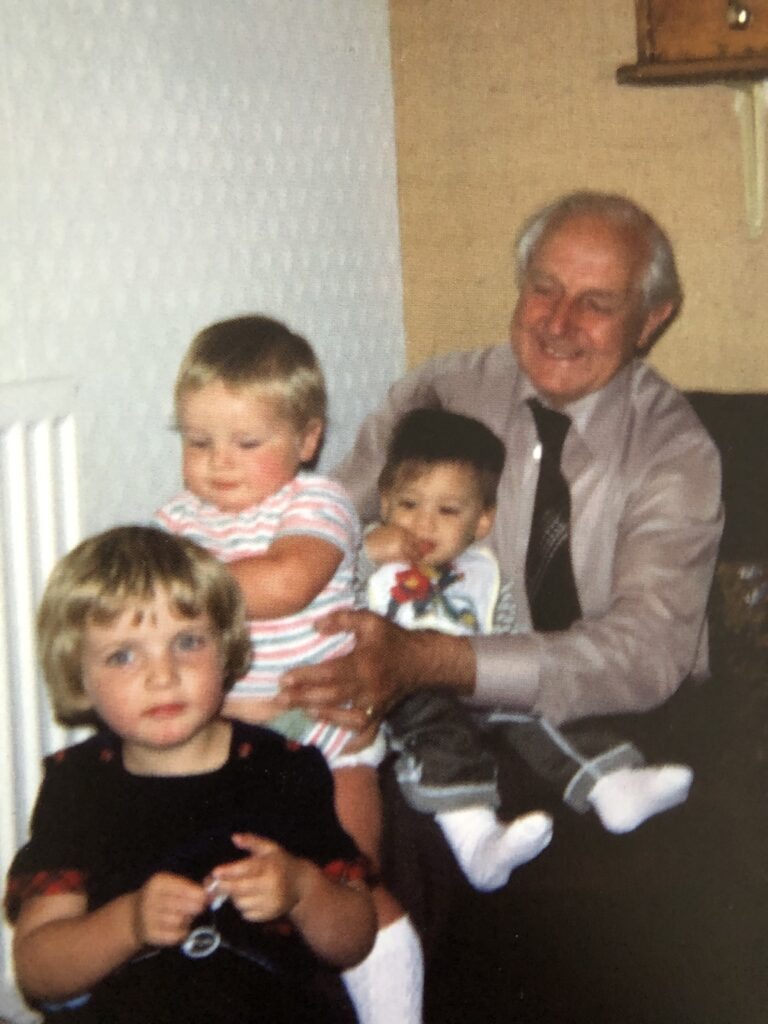 Grandad with me (front), my brother (middle) and my cousin – my uncle’s eldest son