Athletics is a summer sport and athletes compete outdoors, right? Right. Except there is a smaller indoor athletics season, with competitions taking place at a few indoor facilities in major cities in the UK. This winter, my son was very keen to take part in his first indoor athletics competitions.

From my point of view, there was a small problem in that my son hasn’t done a single long jump since he fractured his pelvis at the end of June. He hasn’t even done a jump in training. I know that at the start of the 2019 season, after a whole autumn, winter and spring of not jumping, he managed to jump only about 5 metres 50. Luckily he soon got his mojo back and was jumping better and better at every competition he took part in. So there was always the possibility the first indoor competition of 2020 could go the way of the first summer competition of 2019.

But my son is endlessly positive and endlessly confident and he didn’t see a problem in that at all. So I was going to support him all the way – and cross my fingers that he could still jump. If he could manage 6 metres at his first competition (his PB is 6:51), we would be happy.

Sadly, since my son recovered from his fracture, he has continued to be plagued by injury. The first month went OK, then he played his first rugby match. Between rugby and football, plus athletics training, he managed to pull some tendons at the back of his knee. He ended up missing nearly two weeks of sport. He went back for two weeks and got shin splints. He went back again after about 10 days, then got shin splints again within a week. Literally the only exercise he has done since before Christmas was walking and a bit of stretching. But he was still determined for his first indoor athletics competition.

The indoor athletic competition took place in Birmingham, on the site of the famous Alexander Stadium (currently undergoing a massive redevelopment for the Commonwealth Games in 2022). It was an open competition, meaning anyone could enter and there was no qualifying standard to reach. Several other young athletes from his club were taking part in various events. One of the boys from the club said that only good athletes enter indoor competitions, so there wouldn’t be anyone jumping 4 metres 50.

I had struggled to imagine what an indoor competition would actually look like. The facility was like a warehouse, but with a 60 metre track, and two long jump pits alongside each other. There was no seating and it was absolutely freezing in there. I felt quite nervous for my son. Would he remember how to jump? Could he sprint fast enough? And, most importantly, would his injury hold?

There were 10 boys in his age group – none of whom my son has ever come across before. They were ranked online in terms of their PBs, any my son was top. But this was starting again.

On the first round, one boy jumped comfortably over 6. Many of the boys got no-jumps. There were one or two jumps starting with a 4.

And my son jumped 5 metres 97, despite adjusting his run just before take-off.

The competition went on along the same lines. All of the boys had four jumps. There were a lot of no-jumps, but my son didn’t get a single one. And there were still plenty of jumps starting with 4 and 5.

My son’s second jump looked better than his first, but it wasn’t quite as far. Apart from that, he was very consistent with a 5.95 and a 5.94. We couldn’t have asked for more. His leg didn’t hurt – neither his pelvis nor his shins. He’d lost a bit of speed on his sprint, but he hadn’t lost technique.

His coach was very pleased with his performance and said that anything you achieve after an injury feels twice as good as anything you achieve before injury. That was absolutely true. We were all buzzing at the end that my son was finally back to doing the sport he loves.

We thought he had come third or maybe fourth. There was one jump dead on 6 metres and three that were over 6 metres. It’s not easy to keep track of who has jumped what. It turns out all of those jumps were by the same boy.

My son had actually come second.

The first indoor competition was a very good start to the season and it’s just the start. We expect to see him back to his best very soon. My son has also signed up for the Midland Championships in Birmingham and the National Championships in Sheffield, both of which have a qualifying standard. Thanks to his performances last season, he is well above the qualifying standard. We’re looking forward to seeing what he can achieve. 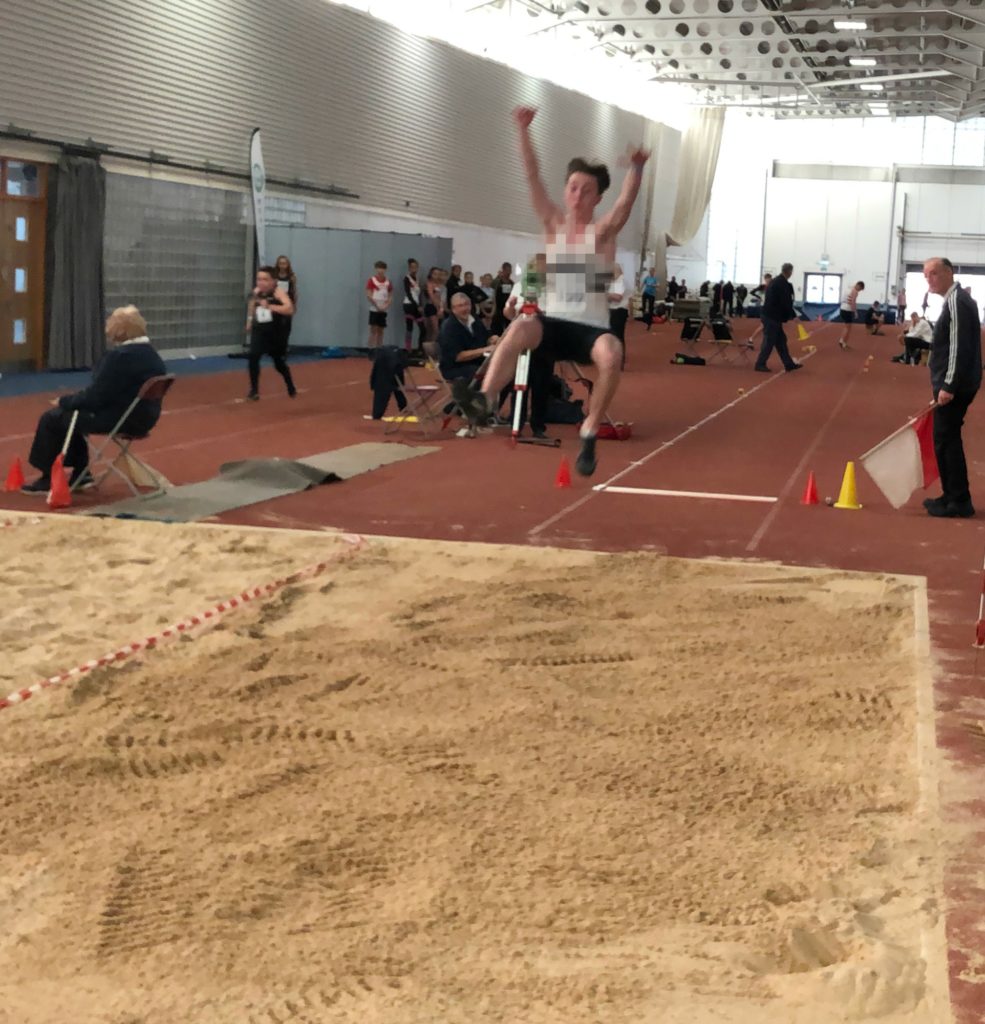