I saw a post on Instagram recently by my friend Helen aka Actually Mummy about university and it struck a huge chord.

University days are the best days of your life, right? Not for me they weren’t.

I didn’t know much about university. None of my family went there. Most of what I knew came from a friend whose parents had both gone there and met their friends for life there. My friend knew for certain that she would meet her friends for life there (which was a bit demoralising for her school friends). I had this very clear picture in my head of uni. I would be there in halls, in my cool clothes, having a laugh with a big group of friends.

Twenty five per cent of first years were in halls at my university. I was not in the 25%. Instead, due to my own stupidity, I ended up in a rented house two bus journeys away from my campus.

I was very close to my family and I had a great group of friends at home. I missed them all badly. I was in a crappy house one bus journey from the city centre and two bus journeys from uni. My standards of housekeeping weren’t high, but I soon realised that having responsibility for a house, with cooking and washing and cleaning was a big thing. It wasn’t easy.

Very early on, I thought my housemate was my boyfriend. In my small town world, you were either boyfriend and girlfriend or you weren’t. People didn’t date, they didn’t play games. But he played games. He was happy to have me at home, but didn’t want the hassle of me leaving the house with him or seeing his friends with him. What an absolute dick. This only went on for a couple of months, thank goodness. But it was all down to my vulnerability and loneliness that I allowed it to happen.

I looked like a student. I would fit right in. I’d been perfecting my look since I was 14. It was a mix of a lot of bright colours. I wore clothes from ethnic shops, band Tshirts, stuff from charity and vintage shops, all mixed in with TopShop and Miss Selfridge’s edgier pieces. I was nailing the student look. 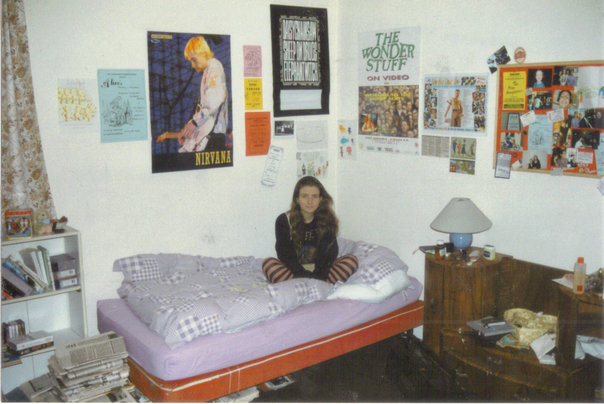 It would have been fine if they just didn’t look like me, but they actively judged me for looking like me. And that’s hard.

At first, I thought I’d made friends on my course. But I soon realised I hadn’t – when I heard people talking about me. I ranted to another outsider, who I was already friends with, and we realised we were in it together. Just the two of us. We became the best of friends and went out that very night to commiserate.

On my course there was a remarkable number of private school kids. Either intentionally or unintentionally, they made me feel small. Which is ironic, because I’d spent most of my school life being judged harshly for being ‘posh’. If you’re quite clever and your dad has a half decent job, you’re posh. And in the eyes of a teenager in the 1980s, posh was always a bad thing and a perfectly valid reason to pick on someone.

There were only 28 of us on my course – slightly more girls than boys. Three of us were called Sarah. Which inevitably led to nicknames. The Queen Bee was just ‘Sarah’, then there was ‘Irish Sarah’, because of course she came from Ireland. I was ‘Sarah with the Clothes’. Credit to my friend, she said I was ‘Sarah’, then there was ‘Irish Sarah’ and ‘F*cking Silly B*tch Sarah’. 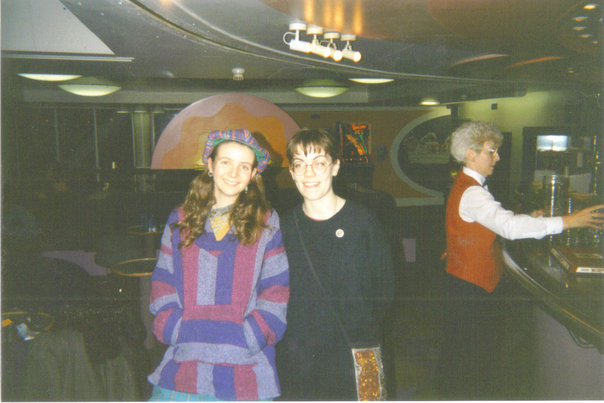 Between the loneliness, the judgement and being away from my family, I cried every day. Every single day for the whole of my first year. People didn’t talk about mental health in those days, but I was clearly depressed.

Although I was very unhappy, it would never have occurred to me to give up and go home. In fact, I was very strict with myself about not going home for weekends too often to avoiding getting more upset. This was the early 90s. We didn’t have mobile phones, in fact there wasn’t even a phone in my first student house. I rang my parents once a week from a phone box down the road.

I carried on crying a lot throughout my uni days. My friend and I moved into a house for second year with some girls we didn’t know – and we encountered the same problems. They didn’t like us, we didn’t like them. I still cried a lot in my second and third years.

I came out with a 2:1 in Broadcast Journalism. Have I ever worked as a journalist? No. Was it a waste of time? Pretty much, yes. University was so far from the exciting picture I had in my head.

I then went on to a further two years of unhappiness as I struggled to get a job, so worked in McDonald’s to keep my head above water. There were times when I actually cried while working. People can be so nasty and judgemental – and the worst for it are usually the people who have got nothing themselves, but still feel it’s their right to judge someone who is actually working and trying to make ends meet.

One good thing came out of university. On literally day four, I met my husband. He was a friend of my horrible housemate who treated me so badly. We got together a few months later and have been together ever since. And my friend and I are still friends. We do go literally years without seeing each other, but when we do see each other, it’s like nothing has ever changed. And we do sometimes still laugh about F*cking Silly B*tch Sarah and her friends.

I never really told my parents how unhappy I was. If your kids have just gone to uni or are preparing to go next year, remember that they are still little more than children. This is a huge step for them and they may not enjoy it as much as they hope to. It’s so much easier now to stay in touch with them. Keep an eye on them from afar and trust your instincts if you think something isn’t right.