How to get a teenager to do their homework

Home » Family » How to get a teenager to do their homework

If you’ve come here looking for answers, I’m afraid you’ve come to the wrong place. I am firmly of the view that you CAN’T get your teenager to do their homework. Not if they are a certain type of personality. No doubt there are a few very strict families out there who rule their kids by fear – and have done from very small – who can’t get their teenagers to do their homework.

But we are not that family.

I know there’s sensible advice – give them their own space (desk in their room etc), keep the house nice and quiet, make sure they’re getting enough sleep, make sure they’re not doing extracurricular activities every minute of the day blah blah blah. We do all of that stuff.

But you can lead a horse to water, you can’t make it drink.

I started thinking about this the other day while on Instagram. A fellow parent, of one teenager, asked how other parents get their teenagers to do homework. As the mum of three teenagers, if any other parent of teenagers asks for advice – I AM STRAIGHT IN THERE! But my advice may not be what they want to hear. 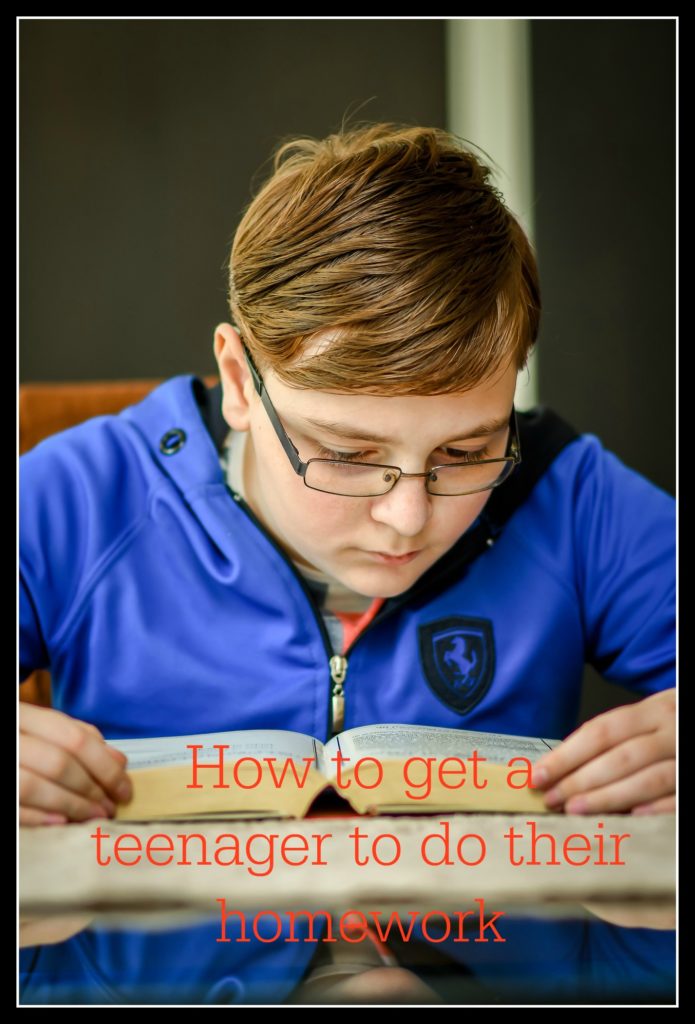 Ladies and gentleman, I present to you my three teenagers…

The simple fact of the matter is, I couldn’t make my eldest work. He knew the consequences of not working – from detention through to doing badly in his GCSEs – and that was his decision.

If anyone else can make a teenage boy do things against their will, I take my hat off to you. I couldn’t do it. My boys are stubborn when they want to be. None of us needed the unhappiness that would have been caused by me trying to force a reluctant 15 or 16 year old to do his homework against his will.

On the flip side, I am bothered by how much homework my daughter gets and how hard she works at it. It’s TEXTILES for goodness sake! What a waste of time! (OK, some kids may wish to do textiles GCSE and that’s fine – my daughter doesn’t, yet she’s still working her arse off at it.) I fear that at some point I actually have to tell her to do less before she burns herself out.

So you can see my issue with teenagers and homework – I’m dealing with the two extremes. I can’t treat them all the same. If you are reading this and you can motivate your teenager to do homework, you are clearly a better parent than I am and I would be interested to hear what it is you are doing. But personality plays a huge part in this and I suspect your teenager is a different personality from my boys…

At this point, I should point out that if my kids ask for my help in any way, they get it. They know I’m there to support them. But they don’t actually ask.

The story for us is still ongoing. My younger son is in year 11 and I know for a fact he hasn’t read Jekyll and Hyde, even though he had several weeks to do it in. He has no excuse, other than that he didn’t want to do it. At some point, he will have to read it, because it may come up in his GCSE.

My eldest did his GCSEs and was disappointed by them (although he didn’t fail or come anywhere close to it), but he didn’t admit it at the time. He knows that he could have worked harder and come out with better results. But could I have made him work harder? No, I couldn’t. Only he could do that.

He coasted through year 12 and half of year 13 at a new school, enjoying being popular and the class clown (neither of which he was at his old school). Then, in the last three months, he decided to work. I didn’t make him do it and nor did his teachers. He kew what he wanted and he knew what he had to do to make that happen.

He smashed his A Levels. He came out with better results than some kids at his grammar school who had been working their arses off since year 7.

And all that without me ever making him do his homework. Did I get it right as I parent? Was I lucky? Should I have nagged him more?

We will never know. That’s just my story. Every other parent’s story and every other teenager’s story will be different.

Thanks to Sally at Who’s the Mummy for the inspiration…