When kids take part in a performance, whether they’re starring in a Hollywood film or taking part in their dance school’s annual show, they need a chaperone. Until fairly recently, for the local dance shows, it was fine for chaperones to be parents. Some of them would probably have DBS from their work or other volunteering responsibilities and some of them wouldn’t. The ones without DBS wouldn’t take the kids to the toilet and everything was fine.

In recent years, the rules have tightened. Now there needs to be licensed chaperones supervising shows. You can understand the additional pressure this puts on dance teachers who just want to put a little show on for the parents. Every dance teacher will tell you a horror story of another dance school which has had a show shut down due to incorrect supervision of the kids.

As a licensed chaperone, you are an advocate for the children in your care. They are your only responsibility – so you can’t nip out of the dressing room to help sort out some props (although you can help with hair, make-up and costumes in the dressing room.) And you can never leave any child unsupervised. If you are the only chaperone – responsible for up to 12 children – you need to take them all to the stage together and all to the toilet together.

I was very grateful to the chaperone caring for my daughter at the panto who spoke up for her, when the director questioned whether she should be wearing glasses on stage. Before the panto, I had filled in a medical form and said that she must wear her glasses at all times. The chaperones had read all of the girls’ forms carefully and remembered this, so they could speak up on my daughter’s behalf.

Way back in November, as a parent of a child taking part in a panto, I was asked to consider becoming a licensed chaperone. I was slightly put off by the time-consuming process, but also keen to do my bit. So I agreed. We were told the application process took about six weeks.

The panto was in the middle of January.

Once they’d received my application, the child employment department at the council (who deal with such things), would follow up my references. Then they would invite me for an interview at the council offices.

My interview was on 10th January. And I hadn’t even submitted my DBS application at that point, because the council take your application form from you at the interview and submit it.

Prior to the interview, I had to complete some online safeguarding training. This wasn’t easy or ‘common sense’. You really had to concentrate and you had to get a high mark to pass. It felt more like I was doing training to be a TA or to work at a nursery or playgroup, then getting a licence to supervise some teenage dancers for a few hours. To be honest, for what I was going to be doing, it felt over the top. But of course they have to follow the rules, even if you are only going to need your licence for literally a few hours.

For the interview, I also had to take along identity documents and pay £20. Clearly the amateur theatre company wasn’t going to cover the cost of that, so it came out of my own pocket. For professional chaperones, who get paid to do the job, the cost is £60.

The interview wasn’t a whole lot of fun. It was informal, but it wasn’t easy. They asked some really taxing questions about what you would do in certain situations. How many kids could you care for? In what circumstances might you care for less children? Can you help with props? Can the kids take selfies in the dressing room?

At the end of the interview, I’d done well enough to become a licensed chaperone. But I still had to wait for my DBS to come back. Needless to say, despite my own best efforts and the efforts of the theatre group, I wasn’t licensed in time for the panto. I had to go back to collect my licence in February, nearly a month after the panto.

But my licence lasts three years, so I will still have it if my daughter does that panto again (her regular, professional panto uses a professional chaperone and doesn’t need volunteers). I will also be able to chaperone for her dance school show, which is a huge weight off the ballet teacher’s mind. I feel some weight of responsibility, because that licence means I should be the most knowledgeable person there, despite never having volunteered before.

If your child is involved in a show that relies on chaperones, do take the opportunity to become a licensed chaperone yourself. Because without enough people stepping up and volunteering, a production can’t go ahead. Yes, the process is a bit of a hassle, and it’s pretty slow too, but it’s a small price to pay for your child’s enjoyment in taking part in a show. 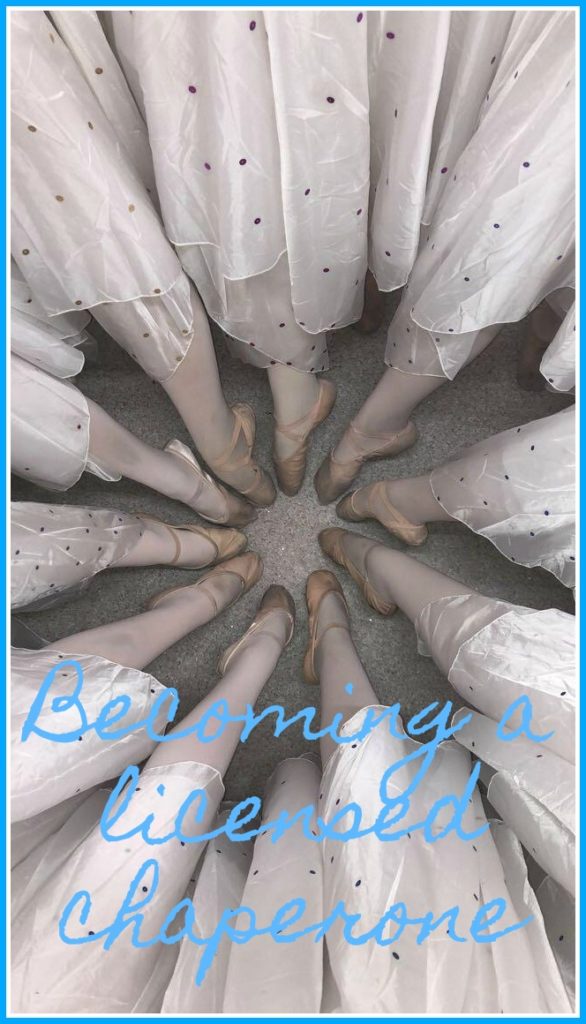