I’m not much a user of apps. I have an iPhone, but I just use it for Twitter, Facebook, my blog and email. Oh, and to check the weather, because I am British after all. That’s plenty for me. I know people who have apps for every area of their lives, who don’t need to fart because they’ve got an app to do it for them. But that just isn’t me.

But then I read about a couple of fitness apps, so I thought I’d give them a go.

I remember paying about a tenner for a step counter 10 years ago. You know when doing 10,000 steps a day was the big thing? Now you can get it in a free app, called Moves. Not only does it count your steps, but it can differentiate between walking and running steps. And it measures how long you cycle for too. I’m not a cyclist, but as it happens I’ve just started going for little bike rides with the kids. I love this app! It is so simple, yet strangely addictive. 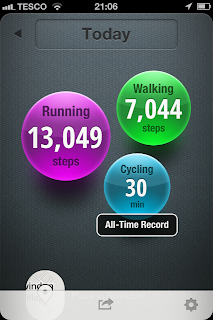 Just a regular day for me. 10,000 steps is for wimps!
Then there’s Now That’s What I Call Running. I went for the free version, but you can upgrade so it can measure calories burned etc. I don’t need that because I don’t run for weight loss. I run for fitness and the sheer love of running. Basically you tell it how long you’re going to run for and it creates you a playlist. It turns out if you’re running for a long time it thinks you need indie, soft rock and Take That. Now I like all of those, they’re on my phone after all. But I like a bit more of a mixture. I like dance music too. Presumably if I told it I was going to run for 15 minutes, it would give me dance music. It also measures how far you’ve run and your average speed so that’s good. But MASSIVE DOWNSIDE – it won’t let you run for over 90 minutes. So it’s basically crap for me.

Just when I was getting into the idea of using apps, I realised I couldn’t find the right one for me. Then a friend, who read my post about running the Camel Trail and not knowing where I was, got in touch to suggest I try RunKeeper.

Well, I tried it yesterday, and it was awesome. There’s no limits on how far and how long you run for. It mixes your music too (again, it thinks I mainly want to listen to Take That – I don’t) and every five minutes it talks to you. It took me by surprise the first time – it tells you (sadly in a rather annoying American voice) that you’ve been running for five minutes, that you’ve run 0.65 miles and your average speed is 8 minutes and 51 seconds (please don’t do the maths on that one, I’ve just plucked it out of thin air).

Another good thing is you can pause it for toilet stops or when the gates are down on the level crossing. For example. These are just the things I would pause it for. Other reasons for pausing it are available. 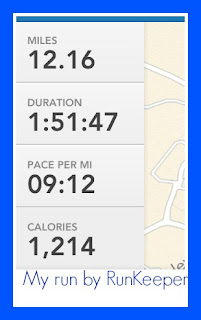 It was the best run I’d done in ages. Probably it was because I’ve done a few 12 mile runs now and my stamina and muscles are ready for it. The weather was also perfect. There was a nip in the air when I started out and although it started to get warmer and sunnier, it never got too hot. And there was no wind or rain to bother me either.

But I think the RunKeeper helped too. I really pushed myself at the end and finished how I like to finish, but haven’t done for a long time. With a smile on my face.

This is not a sponsored post. I just wanted to share my experiences of running with these apps.