Adrenalin Quarry, Cornwall (and not being the mum holding the bags)

Home » Family » Adrenalin Quarry, Cornwall (and not being the mum holding the bags)

My daughter is an adrenalin junkie (she takes after her dad) and is constantly asking to do things that are exciting, dangerous and expensive. We’ve said ‘no’ a lot of times, mainly because her requests often involve other countries and they always involve a lot of money. But, as we were on holiday in Padstow, we decided to pay a visit to Adrenalin Quarry in Cornwall.

We go on holiday to Padstow every year and four out of five of us absolutely love it. For us, the familiarity is important. It feels like home, while also being a break from the slog of everyday life. I worked out that my husband and I have spent nearly six months of our lives in Padstow!

While we have things we like to do every year, we also vary our activities as the kids get older. So this summer we visited Adrenalin Quarry for the first time. Adrenalin Quarry is based in an old quarry (of course) close to Liskeard in Cornwall. It’s nearly an hour’s drive from Padstow. It is home to a number of activities – a giant swing over the quarry, an aqua park (inflatables course), go karts, coasteering, axe throwing (!) and, the thing my daughter was most excited about – a massive zip wire over the quarry. 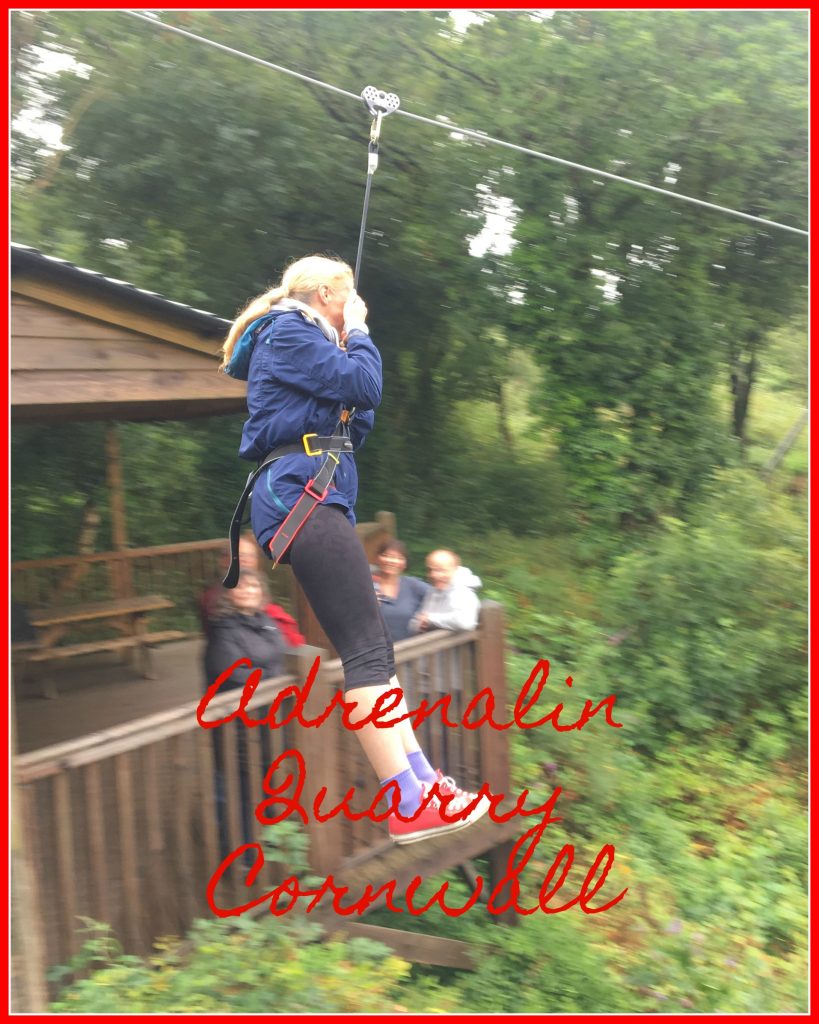 The zip wire is 490 metres long, 50 metres high and reaches speeds of about 35 mph. The kids and my husband were all desperate to have a go. I’m not known for my bravery (I don’t like theme parks, I’m claustrophobic and a general worrier), but I decided I would have a go too! It’s far too easy for mums to become the person who just holds the bags. It happened to my mum and it’s pretty much happened to me too. You can see how it happens – you’re the one who is breastfeeding the baby, then you’re the one who looks after the younger children while dad takes the older kids to do the exciting stuff, then suddenly you’re in your mid-40s, the kids are teenagers and nobody needs looking after. You no longer have an excuse. I needed to be brave and break the cycle.

Until I saw the quarry.

Even my daughter and husband felt a bit wobbly when they first looked at it. And my daughter decided she definitely didn’t want to go on the giant swing.

You don’t have to book in advance at Adrenalin Quarry and, on a rainy Sunday morning in July, it was very quiet. So you just turn up, pay, sign a waiver and you’re being strapped into your harness before you know it. The zip wire is so long that you can barely see the end from the top. There are two lines running next to each other, so you can ‘race’ a family member – although the heaviest person will always win. You are weighed before you get on, so they can ensure they have the right rope for you to have a safe landing. They then radio your weights through to the other end of the zip wire, where two guys are waiting to stop you and unhook you.

My husband and daughter stepped up first. I felt wobbly just looking at them. But they have no fear. Before I knew it, they were gone. It looked so exhilarating and I knew, just from looking at her, how much my daughter was loving it. It did look very exciting, but so high! Within seconds, they were dots in the distance, and it was time for my boys to have a go.

Needless to say, I didn’t have a go.

They walked back up the hill and were bursting with excitement. They were going to have another go (the second go is cheaper) and I had to have a go too. It was like they didn’t give me a choice. It had looked exciting, so somehow I found myself filling in my waiver and paying to have a go myself.

As I stood at the top of the tower with my daughter, I really, really didn’t want to do it. Everyone told me it would be OK and of course I knew it would be, because I’d seen how much they’d enjoyed it. But it didn’t stop me worrying. Then the woman unclipped the final rope holding me in place, gave my daughter a shove (to overcome her weight disadvantage) and I was off.

I don’t even know if I screamed. I certainly didn’t scream with pleasure and excitement. I held on to the rope for dear life. Somehow I was facing backwards when I would rather have faced forwards. My daughter’s smile was enormous. I would have liked to bottle it and kept it forever. She was just so happy. And then I realised I was quite enjoying it too. And I was racing towards the end, getting lower and lower, and suddenly I had landed.

And I was really happy to have done it.

Going on a zip wire isn’t really the bravest thing in the scheme of things, but it was a big deal for me. I’d faced my fears and I’d proved to myself that this mum doesn’t have to just hold the bags. 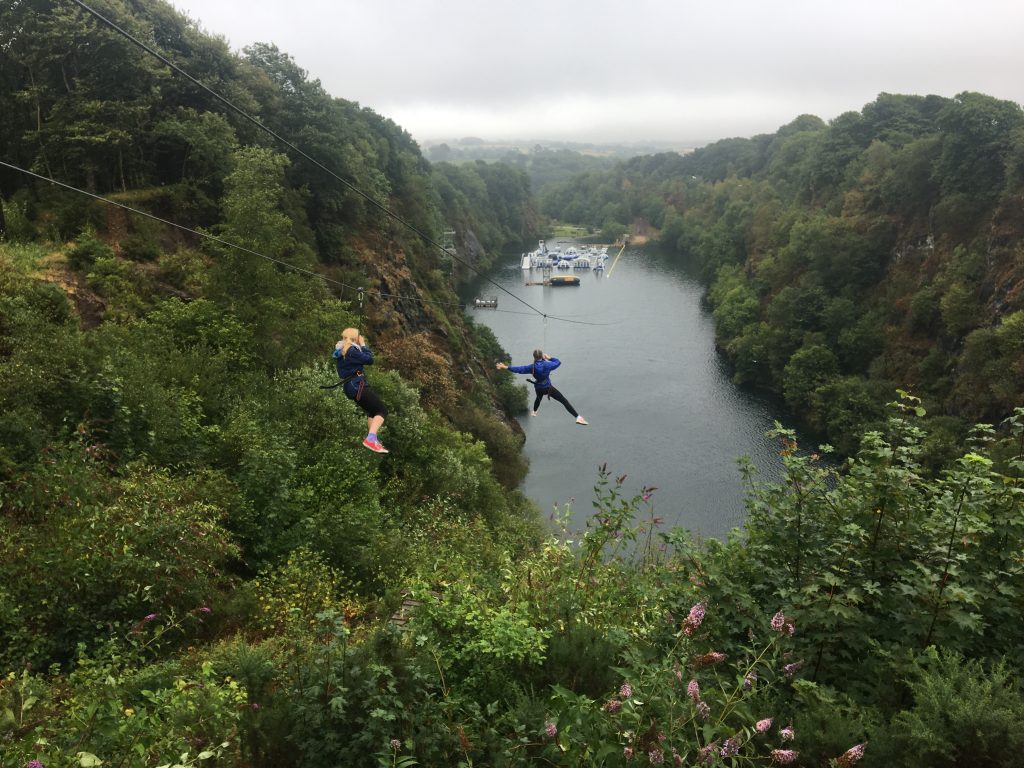