Can we all just stop buying crap for Christmas?

Home » Family » Can we all just stop buying crap for Christmas?

People love it, I get that. It’s a time to relax, to let your hair down, to spend time with family and take a break from the everyday grind.

And what about the guilt about all the crap you’ve bought that will just go to waste?

At Christmas, everything is shiny and sparkly. We have lots of people to buy for and the shops are very good at enticing us to buy their products. Suddenly things that would look like crap at any other time of the year look exciting.

A lot of what we buy at Christmas is set for the charity shop at best, landfill at worst. Maybe it will sit collecting dust for a couple of years before we pack it off to the school fayre.

Buying more than we need to buy doesn’t make us nice or kind, it just makes us broke and causes more stuff to be wasted and disposed of. That shiny gift pack will sit in landfill forever. Putting it in the bin doesn’t make it go away.

I am a great believer in buying what people actually want or need rather than just something that looks nice. It might not look as exciting on the day, but it has a purpose and will last. It will be used, it won’t just gather dust or be chucked away.

I’m also a great believer in not buying too much, even if it does make me look a bit mean (but not to my kids, only to people who like to share pictures of hundreds of presents on social media). That little saying on what to buy kids is a good place to start – something they want, something they need, something to wear, something to read. That covers all bases.

As a parent, you might think just giving four presents is a bit mean, but don’t forget, most kids also get presents from grandparents and aunties and uncles too. Added together, that’s a sizeable pile of presents, which they will be very happy to receive.

My kids have always been very good at not calculating value and comparing numbers of presents. We do try to keep the value similar, but we don’t stress over it. This year, my younger son has three presents, my daughter has five presents and my eldest has four presents from us. The value is fairly equal. They will be very happy with those presents.

They are all things they either want or need. There isn’t a shiny gift pack in there. Nothing that will end up collecting dust or in landfill. I’ve learned to resist the lure of the shiny three for two offer, buying one thing too many and desperately trying to make it fit a person it doesn’t fit. There is no benefit in doing that, either financially or for the environment. It’s not even the thought that counts, because there’s actually very little thought in it at all.

We don’t do stocking fillers because they are prime landfill material (although I appreciate that some people do put practical stuff in there, which is a very good idea).

If you’re buying for a teen or tween nephew or niece, a voucher is always a good option. They get a lot of pleasure out of choosing something, but do check with their parents what shops they’re into, otherwise the vouchers will end up collecting dust too! It’s remarkable how much their tastes change in even a year.

What do you think? Do you like a shiny gift pack or do you try to buy more practical things that people need, even if it does appear a bit more boring at first? 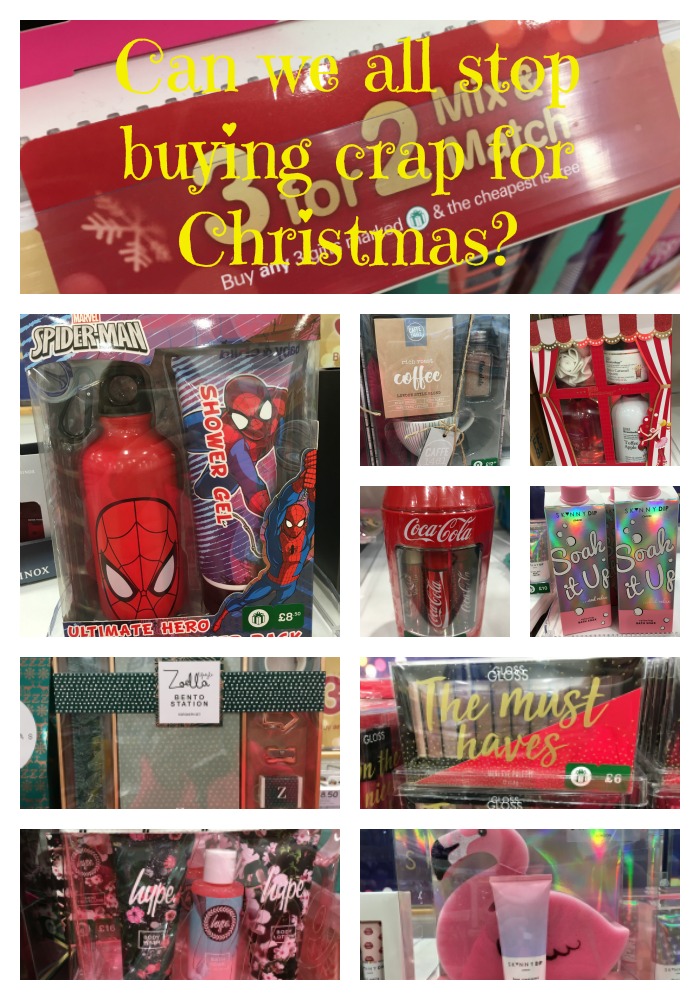