I take birthdays in our house quite seriously. I get a lot of pleasure out of buying the right presents and designing personal cards on Funky Pigeon. There are always banners and balloons – and regular readers will know about our Pumba tradition. Back when I was about 22, my husband put my birthday cards in Pumba’s mouth and he has come out for every single birthday since.

But when it comes to other celebrations, like Father’s Day and our wedding anniversary, I’m not quite so good. It doesn’t help that our wedding anniversary and Father’s Day are within a few weeks of my husband’s and eldest’s birthdays. And men aren’t the easiest people to buy for. Once I’ve bought presents for my husband’s birthday, I could really do with another few months before I need to think up another present.

My life has been relentless lately, with the kids doing more than ever and me trying to fit work in between. There just isn’t enough time to nip into town for a present – or even look online for one. So my husband only had half a Father’s Day present. A small half at that. I knew what the bigger half was meant to be. I just didn’t have time to go and get it. Luckily, he didn’t mind. He would rather have a smaller present than have me running myself into the ground to get him something.

So what could I get him for our wedding anniversary? Our default is always to get each other something from Superdry. We’re both very happy with that. I really struggle with spending money on myself (I bought myself one hoodie in the January sales this year and literally nothing else all year) and my husband isn’t much better. I’ve looked at websites with so-called ‘thoughtful’ gifts and they leave me cold. We’d much rather have something we actually need as presents.

So I would buy him another Superdry Tshirt.

But he was just about to go and do the Three Peaks. What if I could get him a Three Peaks Tshirt instead? That would be a thoughtful present. As I was going out of the door on my way to town, I was searching online for Three Peaks Tshirts.

I got sidetracked by the 20% off school uniform in M&S (I’m a great believer in sorting the uniform early) when I looked up at the middle-aged man in front of me. He was wearing a Three Peaks Tshirt!

‘Excuse me. Where did you get your Tshirt? My husband and son are doing the Three Peaks and I wanted to get them a Tshirt just like that.’

The man very kindly phoned his wife, who informed him it was from Mountain Warehouse. She’d got it online, but she thought they had it in the shop too. The shop that was just a few doors down. The shop I had to go to anyway for a waterproof coat for my son for the Three Peaks.

I walked into the shop and it was empty.

‘Can I help you with anything?’

‘Do you have Three Peaks Tshirts?’

‘Yes, just over here. Do you want black or green? What size do you want?’

So I bought two green Three Peaks Tshirts – one in medium and one in large. My son didn’t need a Father’s Day present or a wedding anniversary present, but he was about to walk up the three highest mountains in the UK in under 24 hours. If that didn’t deserve a present, I don’t know what did.

I was literally walking on air as I left that shop with the Tshirts I’d imagined. I can’t believe how lucky I was to bump into that man. 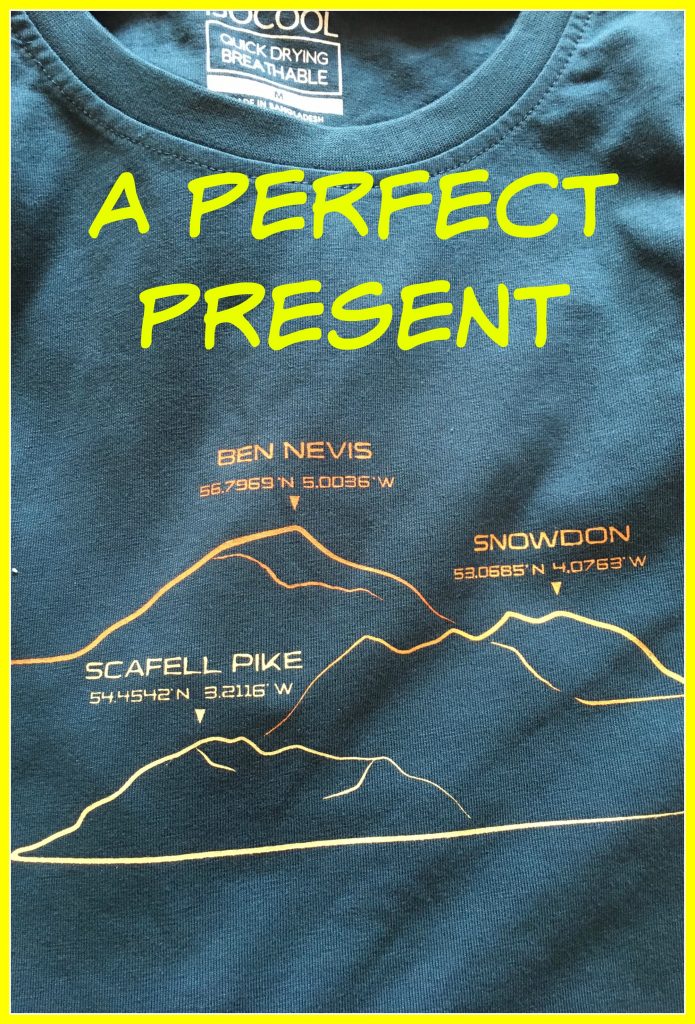