I don’t tend to share tips on this blog. I’m all about the anecdotes – the funny stories, the irritating behaviour, the things that make me proud. But today I’m going to share a tip with you. It’s my school uniform secret and I’ve been doing it ever since our first summer holiday, way back in 2006. It’s not rocket science, it’s really very simple. It’s just this…

Sort your school uniform in the first week of the holidays.

Go through the wardrobes and see what is too small and what is worn out. Drag the kids away from the TV/ Xbox or out of the garden and make them try stuff on if you’re not sure. Remember, if they’ve been wearing shorts and gingham dresses over the past few weeks, they may have grown out of their winter uniform.

Then get rid of it!

Either put it aside for charity or your school’s thrift shop, if they have one, or put it away ready to pass down to a younger sibling. (My daughter has never had a new school shirt in her life and the school PE shorts my eldest had in reception have been worn continually since then.)

Once you know what’s gone, you can think about what you need.

For me, that’s two pairs of trousers for both boys and one pair for my daughter. My eldest also needs new shirts, a new blazer and a new PE kit. I’ve already got the badged school polo shirts and jumpers for my younger son and the badged cardigans for my daughter. 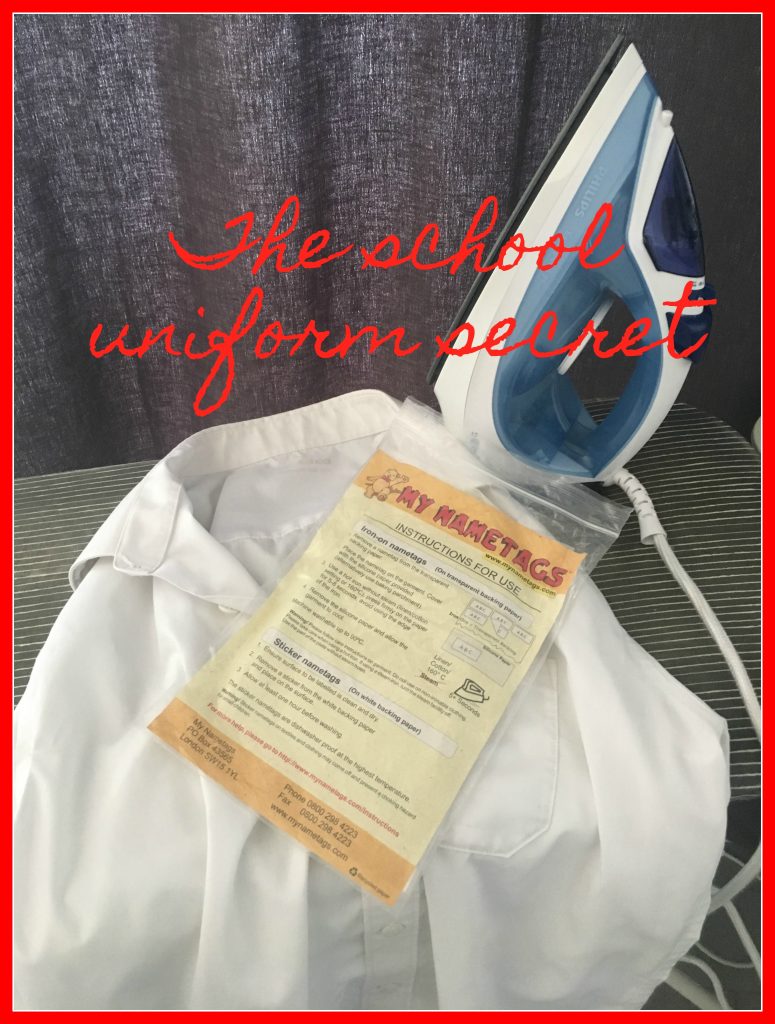 Once you’ve got your uniform, label it! I find it incredible that there are people who send their kids to school without labelling things. If 400 kids are wearing the same jumper, or over 1,000 are wearing the same blazer, it’s very easy for it to vanish and never be seen again. Yes, labelling is a bit of a hassle, but it’s worth it when weighed up against the cost of replacing an expensive blazer.

There are lots of ways to label, but I find iron-on labels work best for me. I don’t sew and pen washes off too quickly (but is OK for emergencies). Some people swear by a stamp. Do whatever works best for you.

Then put away your new uniform and relax! Feel smug that you’re ahead of the game and you’re not going to suddenly realise on 31st August that you’ve got nothing.

The one thing I do leave a bit later is shoes – we usually do those around 20th August. Kids’ feet grow fast – especially in summer and especially if they’re in reception/ year 1 or approaching puberty. As all three of mine are. I don’t want to be feeling smug that I’ve bought shoes on 20th July only to find they’ve grown half a size by 1st September.

Don’t forget that you can book an appointment at your local Clarks, which means you skip the queue. The other parents will be seething when you stroll in and get seen straightaway and they’ve already been waiting an hour. But it’s their fault they weren’t as organised as you!