The bike crash and the cracked helmet

Home » Family » The bike crash and the cracked helmet

My husband is a keen cyclist, who recently took part in the 100 mile Ride London bike ride. After a couple of weeks of taking it easy following Ride London, he was back into going for 50 mile bike rides on a Sunday morning.

The last thing I always say to him when he leaves the house is ‘ride safely’.

Because cyclists have accidents. They’re pretty vulnerable on the roads, when drivers are being stupid or inconsiderate, or there are potholes in the road. My husband had never had an accident before, but most cyclists seem to have them at some point. There was a part of me that always thought it was only a matter of time.

And so it was at 8.30 on Sunday morning. I was just finishing off a bit of work and preparing to wake my daughter, when my husband rang. I knew something wasn’t right. It was too early. He usually rings when he has a stop halfway. He wouldn’t be halfway.

He said I should take his car and one of the boys to navigate. Of course I had to take my daughter too, as I wasn’t sure how long I’d be gone. I woke my daughter and my younger son. I told my daughter not to panic, but she immediately burst into tears. My daughter really, really loves her Daddy.

We drove for 45 minutes through the Cotswolds to find him. It was remarkable how far he’d cycled in only an hour and a half. Just before we got to him, I noticed a hospital with a minor injuries unit. That was good to know. Just in case.

He’d been given a lift by a kind lady who worked at a local tourist attraction. She’d driven him there to clean up a bit and given him a cup of tea. He was waiting at the entrance to the tourist attraction with another cyclist, who had obviously stopped to see how he was. He was smiling and talking, but there was blood all down his leg. A lot of blood. I’d probably brought the wrong son with me (my younger son really hates blood).

He showed me all his injuries, which went from his shoulder, all the way down his body to the gory knee. There were cuts on both hands, and one was very swollen. There was a rip in his lovely Ride London cycling top. Most worryingly of all, or maybe best of all, there was a crack in his cycling helmet. Without that helmet, he might not be here today. He certainly wouldn’t have been capable of standing up and chatting normally, despite the blood and pain. 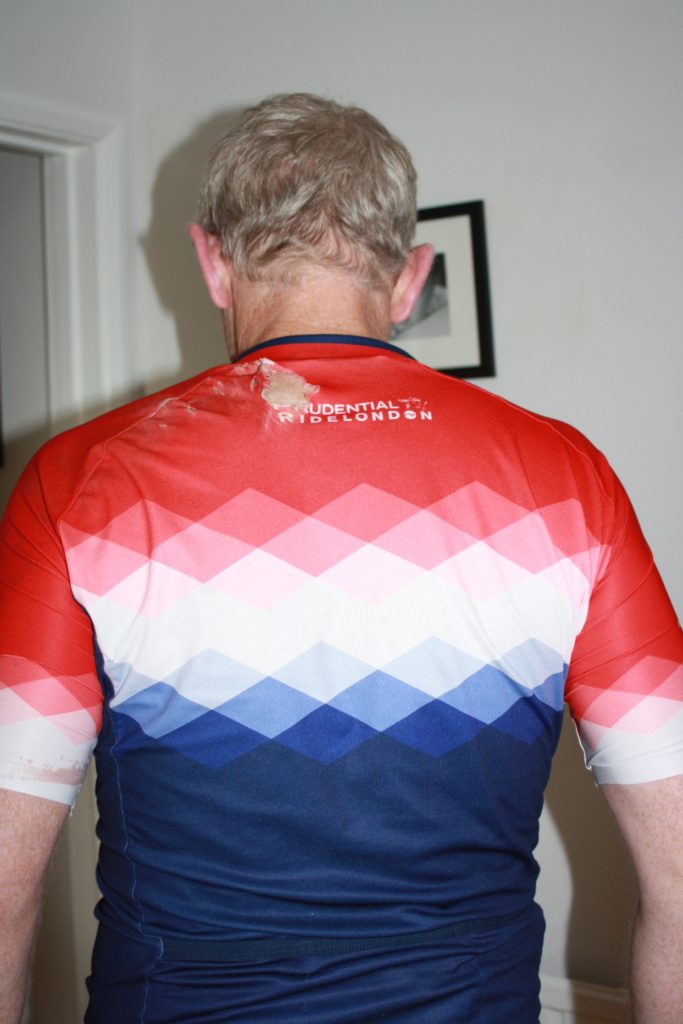 I’m embarrassed to admit that I was so focused on my husband and his injuries, that I didn’t even realise that the ‘random cyclist’ was actually his friend. He goes cycling with him from time-to-time, but I hadn’t realised he was cycling with him that day.

From the large number of injuries, I decided we would take advantage of the hospital we’d spotted down the road.

They patched up his gory leg on arrival to stop it from bleeding further, then we sat in the waiting room. After half an hour, he was ready to leave and go home to clean himself up in the shower. I was starting to worry about whether we’d make it back for my son’s football match, but he was soon called in.

It was a good job we went to the hospital. It took a full 45 minutes and a lot of NHS gauzes, bandages, tweezers and antiseptic wipes to clean him up. There was a huge amount of grit in his leg, plus he needed his hands and shoulder cleaning up. They felt the very swollen hand wasn’t broken and they also checked his head. As he hadn’t been sick and didn’t have blurred vision, they were happy that he wasn’t concussed, although we were given a head injuries leaflet to let us know what signs to look out for.

And they kept telling him how lucky he was. If he hadn’t have been wearing a helmet, it would have been a very different story.

In true husband style, he drove himself home, had a quick bath and was at my son’s football within an hour of getting home. He didn’t even have a paracetamol until he went to bed that night. He’s not good at resting, but he’s found himself getting tired. His whole body has been aching and his shoulder is stiff. He’s been to the GP’s surgery to get his dressing on his knee changed.

But I can’t stop thinking about how lucky he was. 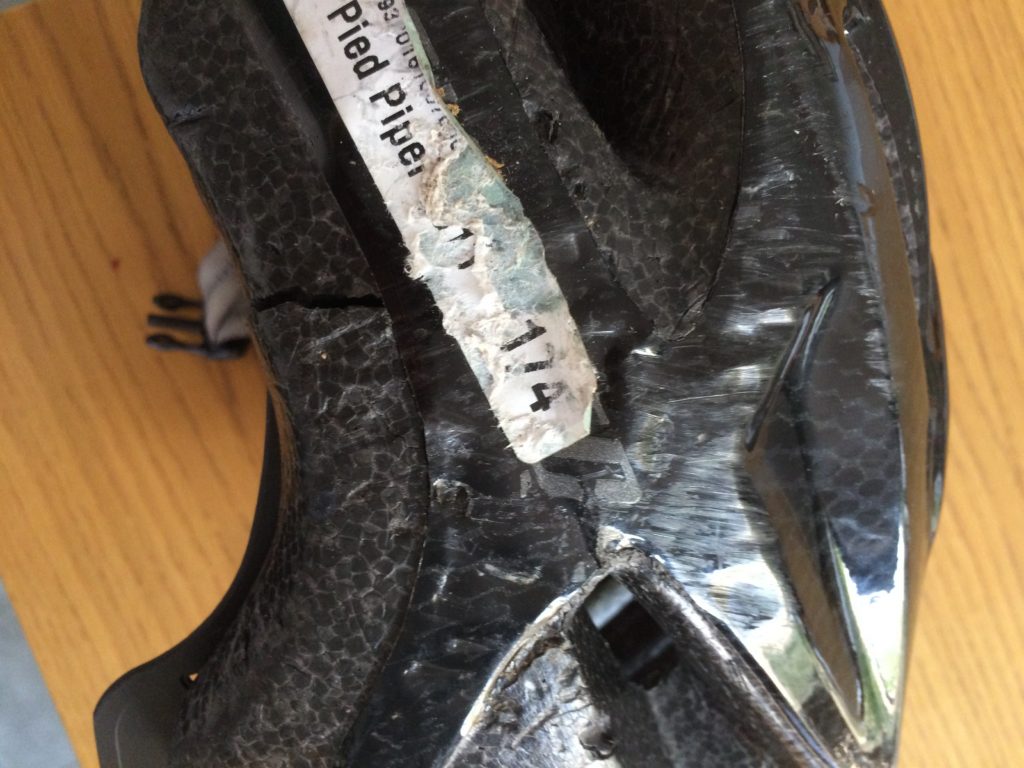