A few years ago, not long after London 2012, my husband bought himself a bike. A ‘road bike’ he called it. I would have called it a ‘racer’ or a ‘racing bike’ because that’s what we all called them in the 1980s. Then we all started riding mountain bikes and racing bikes went out of fashion.

But it turns out they were back in fashion. And they were nothing like the 1980s bikes. My husband’s bike was as light as a feather, with a slim saddle. And it wasn’t £100 from Halfords. Road bikes were expensive. And they came with lots of accessories. Funny shoes that clipped onto pedals. Hilariously unflattering tight trousers with straps that went under his clothes…

Cycling was my husband’s new hobby. He would go out on a Sunday morning and ride 20 or 25 miles. When he told me where he’d been it seemed like an impossibly long distance. And then he would take months off. Cycling and cold weather don’t go well together. Nor does cycling and weekends packed with kids’ sport.

Not long after he got his bike, he started talking about ‘Ride London’. I didn’t know what it was, but he wanted to take part in it. So he applied. Every year. And never got a place.

Then I found out what Ride London was actually about.

100 miles of cycling through London and Surrey.

100 miles is a flipping long way. It’s about the same distance as cycling from our house to London. And nobody would cycle that far. That would just be mad.

More equipment was acquired – a Garmin was better than his phone (and stopped his phone battery from dying). He got a new seat as the old one was uncomfortable. A hat to wear under his helmet to stop his head from burning. There were more layers of clothing. And special snacks. Lots of snacks.

He started to train on a Sunday morning. The first couple of times he rode 40 miles, it wiped him out. He came home and fell asleep for half the afternoon. And he wasn’t even halfway there! How would he manage 100 miles?!

But he increased his distance to 60 miles. From getting home at 11am, he was now getting home in time for lunch. In the last few weeks, he was getting home after lunch. He managed 80 miles. And he didn’t fall asleep on the settee.

With all the exercise and some healthier eating, he lost weight too – about 19lb.

He was ready to Ride London!

The ride started very early in the morning at the Queen Elizabeth Olympic Park (Ride London is part of the London 2012 legacy). It went through London and out to Surrey. Through beautiful towns and villages and countryside. Up the famously challenging Box Hill, which was much talked about during the Olympics.

But Box Hill wasn’t as bad as the hill he was used to at home!

Somewhere in Surrey, everything stopped. There had been a serious accident just in front of him. The riders were contained while the air ambulance rescued the injured rider.

In the meantime, I was wandering the streets of London with my eldest and my daughter. We’d visited the Imperial War Museum and knew we had to be at the Mall to see him finish and at Green Park to meet him. We knew about what sort of time we needed to be there.

When we unexpectedly stumbled on the ride as we emerged from Westminster tube station, I felt strangely emotional. All these riders, normal men and women, riding through London, with people cheering them. They looked happy and strong. They were doing something amazing.

And, somewhere not too far behind them, was my husband.

Green Park and the finish line on the Mall turned out to be more challenging than we’d envisaged. We ended up on the wrong side of the route – the side without pedestrians – and it was a very long walk to even get to the other side. And an even longer walk to get to the finish line. Especially with all the people around – cyclists, spectators and the usual tourists slowing us down.

Time was running out. We could watch him after the ride had officially finished, as he walked towards Buckingham Palace, but we wanted to see him cross the line. We started to run. In the heat. Weighed down by heavy rucksacks.

It was slightly crowded at the finish line. I knew we wouldn’t actually see him finish, which was a shame. It was good to know we were there, but actually seeing him finish was better. So I got my son to put my daughter on his shoulders and she was officially in charge of photography duties. My eldest and daughter argue like cat and dog, but he can usually be relied on to help out when I really need him to. We didn’t have long to wait. 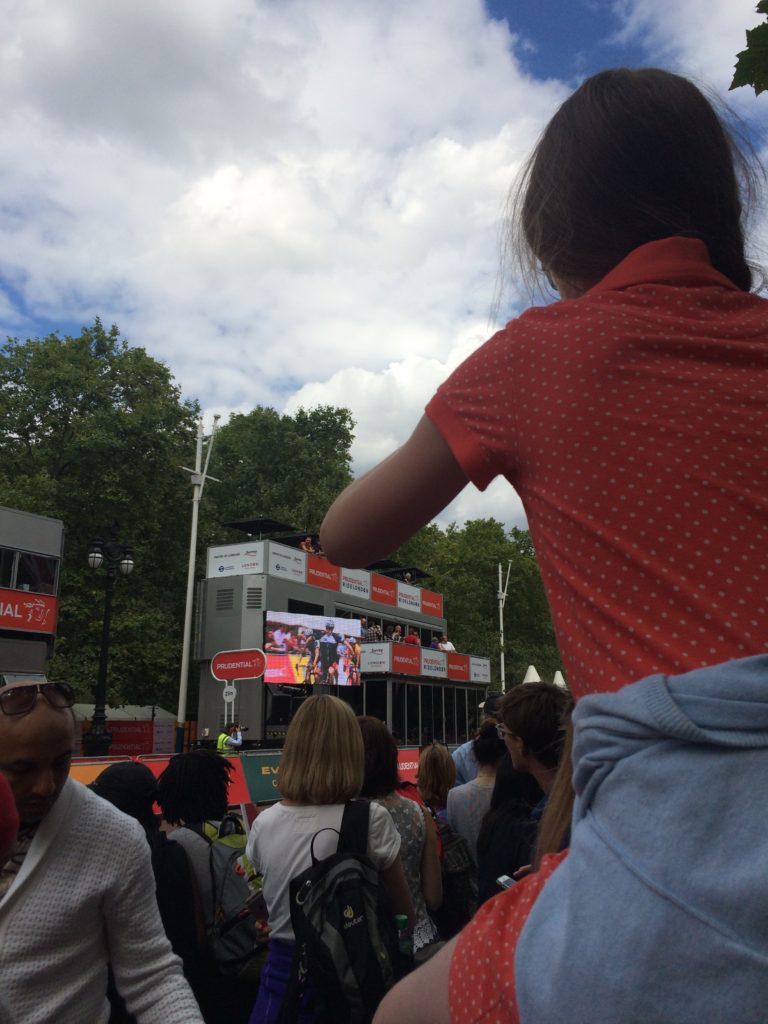 We were enjoying the novelty of seeing my daughter’s face on the big screen when she shouted ‘I saw him! That was him!’

She’d got a perfect photo. She’d concentrated very hard on everyone wearing his top (a very popular one) with a black helmet. She wasn’t even sure it was him when she took the photo, but she’d got it spot-on!

I was so pleased we’d actually made it to the finish line. He hadn’t seen my daughter, but he was happy to know we were there and thrilled with the photo she’d taken.

When we caught up with him, he was buzzing. One seriously happy husband. He’d loved the ride and felt so pleased to have done it. He wasn’t tired in the slightest. He wasn’t limping when he got off his bike. He’d done brilliantly.

It took us two hours to get back to the car and he managed to drive back to Gloucestershire before falling asleep. (I was ready to step in with the driving if he felt too tired.)

I was so proud of him and so pleased he’d finally got the chance to Ride London. He may never do it again, but he will always remember he rode 100 miles in 2016 and it was one of the best things he’d ever done.