Getting my daughter’s ears pierced

When my daughter was younger and asked when she could get her ears pierced, I would just say a vague ’10 or 11!’ because 10 or 11 was years away. But, actually, it wasn’t years away. It crept up on me and suddenly she was ’10 or 11′. And it was time to make good on my promise.

Except I wasn’t sure I wanted to. Suddenly those little lobes looked too tiny and perfect to be mutilated with piercings (as a woman with three earrings in each ear and a pierced nose, I was clearly being a total hypocrite).

My mum too had remembered my promise and had bought my daughter a very pretty pair of earrings as a ‘well done’ present after the panto. Which didn’t really help my case for her waiting a few years longer. And all of her friends started having them done. It was time to face facts, she was plenty old enough to have her ears pierced if that was what she wanted.

The summer holidays between years 5 and 6 seemed like the perfect time to get them done. It meant she could have her six week healing time free of PE lessons. Coincidentally, it was the exact time I’d got mine done 32 years ago. My daughter decided she wanted them done on the very first day of the holidays, which was a nice thing for her to look forward to and also seemed very sensible as it gave her maximum healing time.

A couple of her  friends had had them done at a jeweller in town and had had no problems with them, so that seemed a good place to go. My daughter researched prices and said they were £10. Which rather surprised me. I had expected more. She was paying herself as we believe in kids saving their own money and learning the value of things and how to prioritise what they want. She only gets £3 pocket money a week, but is remarkably good at managing her money.

I rang the jeweller to make an appointment and confirm the situation with the pricing. It wasn’t as straightforward as my daughter had thought. There was only one pair for £10 and the others went right up to £35. I suspected the earrings her friends had, that my daughter really liked, were closer to the £35 than the £10. So I didn’t want to make an appointment until she’d actually seen the earrings. There was no way she would pay £35 (and I didn’t want her to), but I didn’t want her to feel disappointed by the cheaper choices.

On the day school finished, we headed to the jeweller to see the choices – and my daughter’s best friend was actually in there having her ears pierced! There was only one pair for £10 – the plainest, most boring gold ones. The flower ones her friends had got were £35 – and her best friend was getting those too, as a birthday present. A lot of the earrings were £26, but there was a perfectly nice pair of crystal titanium earrings for £14. So, after much umming and aaahing, she chose those. Not that she was sure she actually wanted her ears pierced at all, because her friend had told her it hurt! She thought she might go back the following day, but eventually decided she might as well get it done there and then.

I read the terms and conditions and signed them. The lady wore surgical gloves to pierce my daughter’s ears. She sanitised the ears with a wipe and marked them with a pen, checking carefully that they were level and an equal distance from her face. I double-checked the position too, although it’s hard to imagine what they would look like with actual earrings. 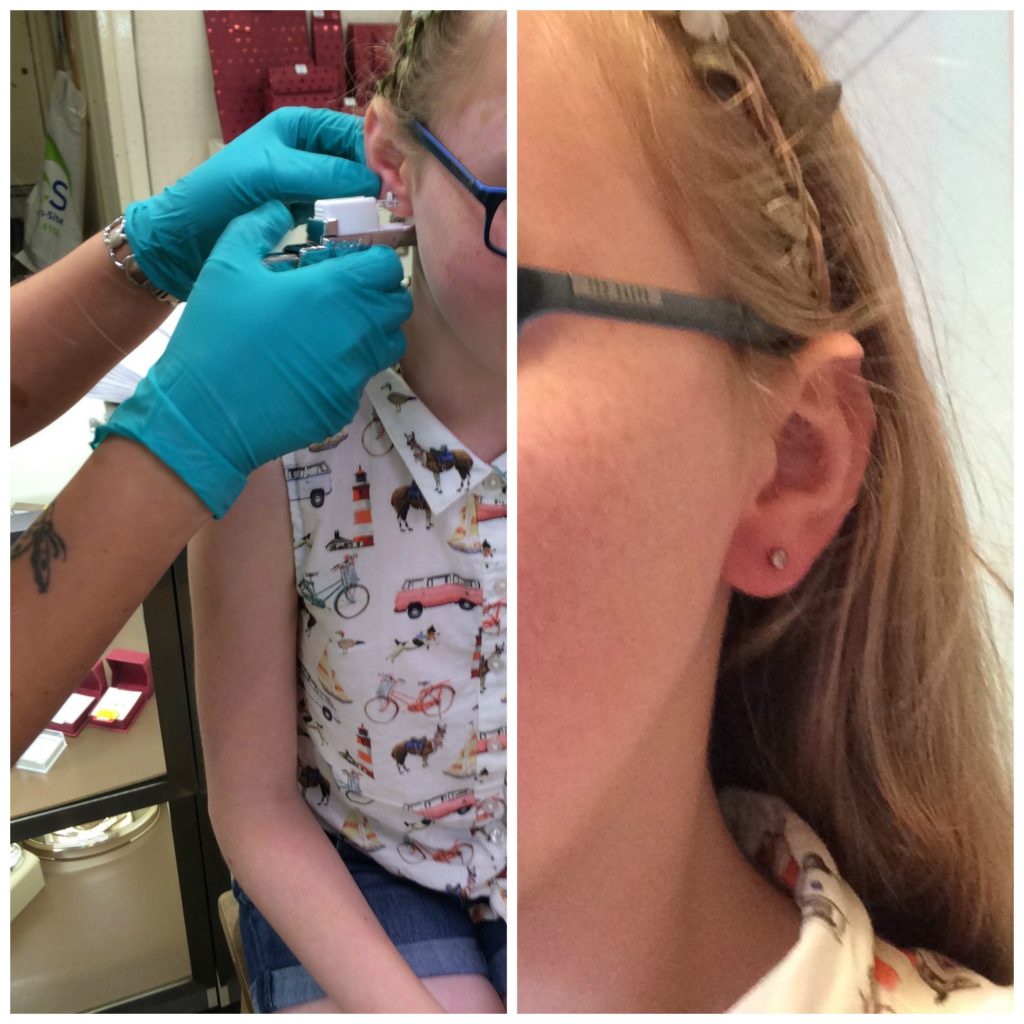 Piercing hasn’t changed a lot since I last had my ears pierced about 20 years ago. The earrings still come from little sterilised packs and the ears are pierced with something rather like a stapler. The lady asked my daughter if she was ready, she held my hand and the job was done! It didn’t hurt as much as she’d imagined it would and she was happy to go straight onto her second ear. That one hurt a little bit more, but she was still fine with it.

The ears looked red and hot for a while afterwards, but they didn’t hurt for long. The earrings look very pretty, and no less pretty than earrings costing more than twice as much. I wasn’t sure if they were a bit too far from her face, but it was so hard to judge from the pen dots.

We’re now into cleaning twice a day for six weeks and regular turning. The lady who pierced them was concerned that my daughter’s very long hair shouldn’t get trapped in them, as that would increase the risk of infection.

My fears that my daughter was too young or that they wouldn’t look nice were unfounded. Now we just have to keep them infection-free!