During the approximately eight months of the year that constitute the winter (in kids’ sport terms, if not other terms), you will often find me moaning about the lack of freedom and flexibility of our weekends. Not for us weekends away or days out. Because we’re committed to sport!

Last winter wasn’t quite so bad – we’d moved on from Saturday morning football and Sunday morning rugby of the under 11s season. My boys had given up club rugby  and football had moved to Sunday afternoon. There were a few school rugby matches on Saturday mornings. There was a little bit more flexibility, but still not enough for us to have a weekend away or even a day out. Because we’re not flaky or quitters. If we commit to sport, we COMMIT TO SPORT. We don’t miss it for days out, family visiting, sleepovers etc etc like other families. It’s just not in our nature. But sometimes, just sometimes, I wanted a break.

But be careful what you wish for…

The break is here now. It’s the summer (kind of). No football and no rugby. The weekends are our own!

And they’re busy. Too busy. I’m not sure if it’s because there’s no sport or just because it’s summer, but something seems to be happening every weekend. I want to enjoy them, but they feel a bit strange.

It seems like every weekend a member or two of our family is missing and I don’t really like that. There’s endless packing, unpacking and washing to do. Sometimes it’s hard to even remember who’s at home. Then you have to remember when the returning member(s) of the family will be back, inevitably unloading a rucksack of damp, filthy clothing all over the kitchen floor and shovelling copious amounts of biscuits in their mouths. (They do feed them on Scout camp, honest!) 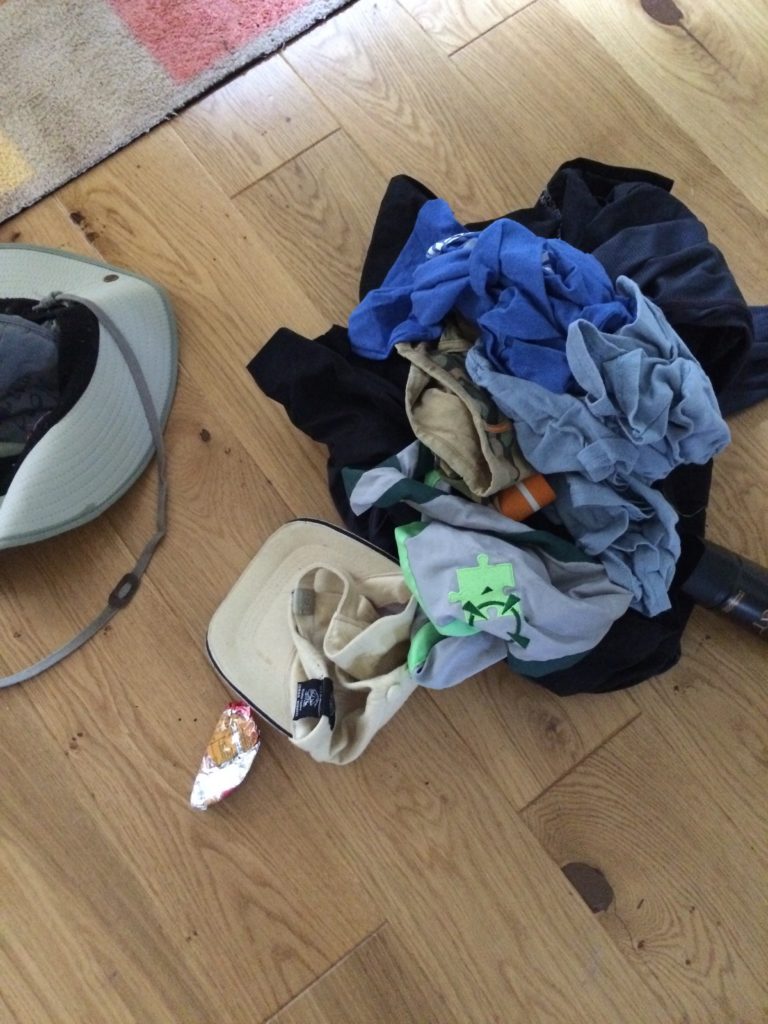 So far, the summer has gone something like this:

So I spent two Friday nights completely alone, which is a strange feeling (although I do sleep a lot better). My husband takes the kids camping with his friend and his kids every year. It started in 2005 with just two men and two kids and they’ve never missed a year. Gradually the number of kids increased and it’s been six kids, three boys and three girls, now ranging in age from 8-16, for several years now. They used to literally just camp for a night, but in recent years they’ve started staying away for two nights and climbing mountains! They did Snowdon two consecutive years and this year it was the Brecon Beacons.

I miss them when they’re gone, the house feels way too quiet. My own space is nice for a while, but it’s a bit too long to be on my own. I also worry about them while they’re driving and while they’re walking. I know it’s silly, but that’s my entire family in a car together without me and I worry about them having an accident.

And so it will continue… This weekend I’m away from the house working all day on Saturday and Sunday and they will most likely be 12 hour days. My husband will be juggling childcare, plus a long charity bike ride.

Later in the month, my younger son will be away on Scout camp for a full week.

I’m actually starting to miss the routine of winter sport. At least I know where everyone is and we’re actually together.