Every year my husband and his old best friend take their kids on a camping trip. It’s a tradition that stretches back about 10 years. On that very first camping trip there was just the two dads, my eldest and my husband’s friend’s daughter, 18 months older than my son and at that time an only child.  The camping trips alternated between closer to us (usually the Malverns or Forest of Dean) and closer to them (usually North Wales). Over the years, the number of campers has grown – first there was my younger son, then my husband’s friends younger daughter and my daughter (the only two out of the posse who are the same age) and finally my husband’s friend’s son. Two men. Six kids aged between 6 and 14. Could be a recipe for disaster.

The camping trips always took a similar form. Arrive early afternoon on a Saturday, put up tents, play in playground, cook and eat tea, go for a walk, play in playground, go to bed. In the morning they would cook breakfast, play in the playground again, take the tents down and head for home. They weren’t gone much more than 24 hours.

But this year, they wanted MORE. My eldest and my daughter have been truly bitten by the Snowdon bug – we went earlier this year and they wanted to go again. So this year it was a longer journey and two nights camping, with a flipping big walk in the middle.

I can’t tell you how anxious this made me feel. There’s something about seeing your entire family driving off together that can make a person quite nervous. It’s the thought of them all being wiped out in an accident. And me not being wiped out in the accident. Can you think of anything worse? So that was two long car journeys and a mountain climb to make me nervous, not to mention the general loneliness of being on my own at home for two days (this has never happened before).

I was also worried about how my younger son would cope. He got very upset when we went to Snowdon in April and couldn’t make it to the the top.

I realise I’m a bit of a control freak. I worry about things like food, drink, medicine, sun cream, warm clothes and hand washing. I like to be prepared for every eventuality, even if that does mean carrying a really flipping heavy bag. I made a discreet checklist and gave it to the kids so they could be sure they had everything they could need for climbing Snowdon. My husband would never see them starve, but would he think about warm clothes or take enough drinks?

The plan this time was up the Pyg track, which follows a similar route to the Miner’s track we took earlier this year. I thought the Pyg track was worse, but apparently it isn’t. It’s steeper all the way, whereas the Miner’s track is fairly flat most of the way, then you have a rather scary climb, which involves using your hands sometimes. Too scary for me! 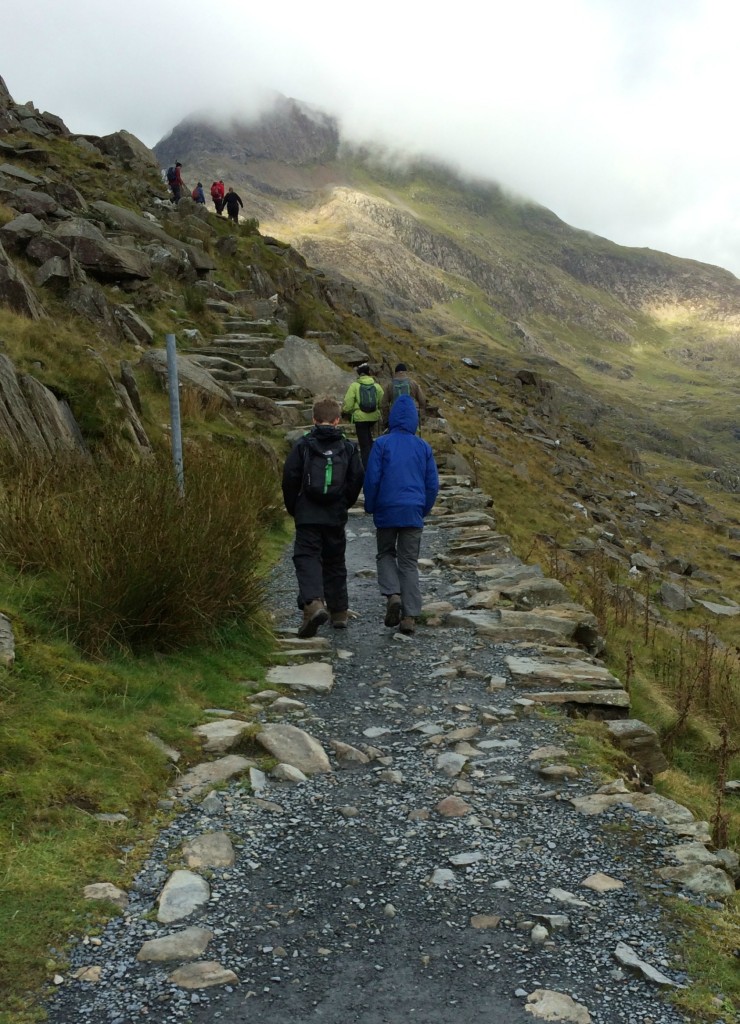 Well they all made it up the Pyg track to the top, including my husband’s friend’s 6 year old son. Very impressive! The weather wasn’t great – the kids said they were ‘in the clouds’. Visibility was poor, the wind was strong and it was drizzling. It was probably the poor visibility which helped my son overcome his fears and make it to the top – he couldn’t see well enough to see how far down it was!

The cafe was open, so they were able to have a proper lunch before heading back down. They planned to go down the Llanberis path, which runs parallel to the railway. We went down this way last time – it’s very gradual and an easy walk, although a rather long one! My younger son bought a hat with a map of Snowdon and all the paths on it. He kept telling them they were going the wrong way (as they couldn’t see very well), but they didn’t listen to him. In the end they managed to take the Ranger’s path down instead.

Apparently my younger son started to get very cold at one point. I’m not sure how many layers he had on/ with him. I would certainly have insisted on an extra jumper in the rucksack in case, but of course I mollycoddle the kids! He needed gloves. That was one thing I hadn’t considered in August. Even for Snowdon. 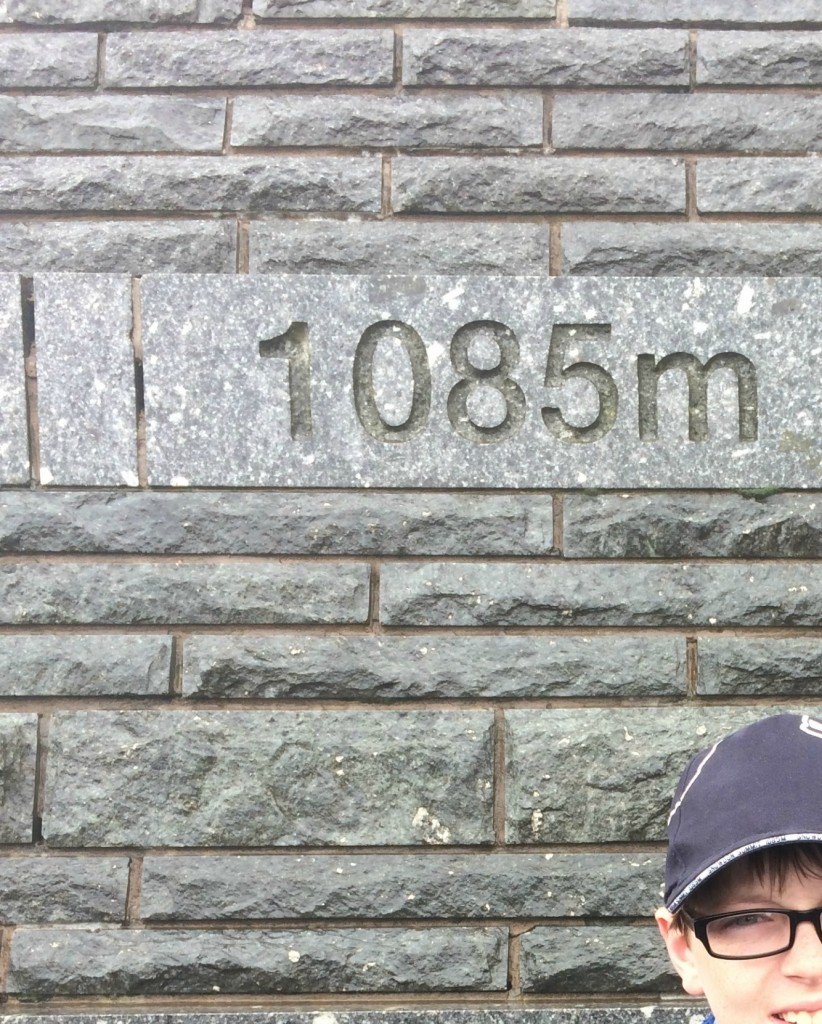 And they all made it! A very long, steep walk in quite poor weather. No accidents (apart from my eldest tripping on a rock and falling flat on his face), no moaning and nobody being scared. Presumably they also managed it without mummy’s supply of squirty antibacterial hand gel too!

When I spoke to the kids later, they were all buzzing. My younger son will rarely speak to any of us on the phone, but he couldn’t stop chatting. It was a bigger achievement for him than for anyone. He’s so proud to have made it to the top – and that he has now, at the age of only 10, walked four of the six paths leading up Snowdon. And he kept saying to me: ‘I’ve had two Cokes today!’ I think he thought he would be in trouble. Coke is a special treat and, even when he has it, he’s only allowed one. But to walk up and down Snowdon? That is DEFINITELY worth two Cokes!