The girl who cried wolf

Regular readers will know that, for the last couple of years, my daughter has been to A&E three or four times a year. She’s an active girl – always dancing, running, jumping and climbing. Sometimes she lands awkwardly on her ankle, wrist or toe. It’s ALWAYS her ankle, wrist or toe. She’s unlucky too – she’s the one who classmates will stumble into and knock over, who falls when her brothers’ ‘fun’ is a bit more boisterous and enthusiastic than it should be and who gets a giant splinter embedded in her knee during a panto rehearsal.

I feel sorry for her that these things keep happening. It really is genuine pain that she’s in. But I wish she’d realise that she gets over it after a couple of days. That it really is just a mild sprain. That Calpol will help. That it definitely isn’t broken. (Well, apart from the time she broke her finger… )

Last Tuesday, she came out of school looking pale and sad. She didn’t need to speak. I just knew there was something wrong – she had a headache, she felt sick or she’d hurt herself.

It was the latter. She’d been moving a table with another girl after assembly and the door wasn’t open quite wide enough. Her hand had got trapped between the table and the door and it really, really hurt. I could see that it was already starting to swell. In true year 5, not-wanting-to-make-a-fuss style, she hadn’t told a teacher or cried. But she was struggling to hold back the tears.

There wasn’t a lot I could do, as she had to rush off to her tutor. She still felt miserable later, so I gave her some Calpol. The next day, she cried on and off about her hand and had a couple more doses of Calpol.

But I knew it was going to be better the next day. Her injuries are always ‘terrible’ for two days, then they disappear. There was no way I was taking her to A&E.

The next day, it was still painful and swollen and she was still crying. She had more Calpol. She could tell me exactly where it hurt. Usually, when she injures her wrist or her ankle it’s a generalised pain. But there was a point on her knuckle of her left hand that would make her jump through the roof if you pressed it. I was starting to think maybe it was more serious, after all.

Recently, I’ve discovered the pleasures of the minor injuries unit. It’s at a different hospital to A&E, a bit further away, but just as easy to get to. It’s quiet and clean, with no drunks or police. It even has free parking! Dealing with sprains and minor fractures, it’s perfect for us. But the X-ray closes at 4.30pm. We would have to wait another day.

On Friday morning, she was still no happier. But I didn’t want her missing any more school and I had work to do. But if we waited until after school, the X-ray would be closing… So I wrote a letter to her teacher saying she had a hospital appointment at 2.30 and I’d pick her up at 2pm. Work done, hardly any school missed and at the hospital in time for the X-ray – win!

The nurse talked to her about what she’d done and could see the hand was swollen and bruised. Then she started pressing it and saying, ‘does this hurt here?’. She started at the wrist and went along all the bones of the hand. None of it hurt, until she hit the painful knuckle, when my daughter jolted up off the chair and squeezed my arm tightly enough to break it. Then the nurse started pressing the finger attached to the knuckle and my daughter jumped and breathed heavily. I didn’t know the finger hurt, but it was the pressure on the knuckle caused by touching the finger that hurt.

‘Well, I think we should send you for an X-ray.’

The radiologist was kind and cheerful and the X-ray was done very quickly. Then we waited about 40 minutes for the results – that’s longer than we would wait in A&E (although we would have waited up to three hours to be seen in the first place!). 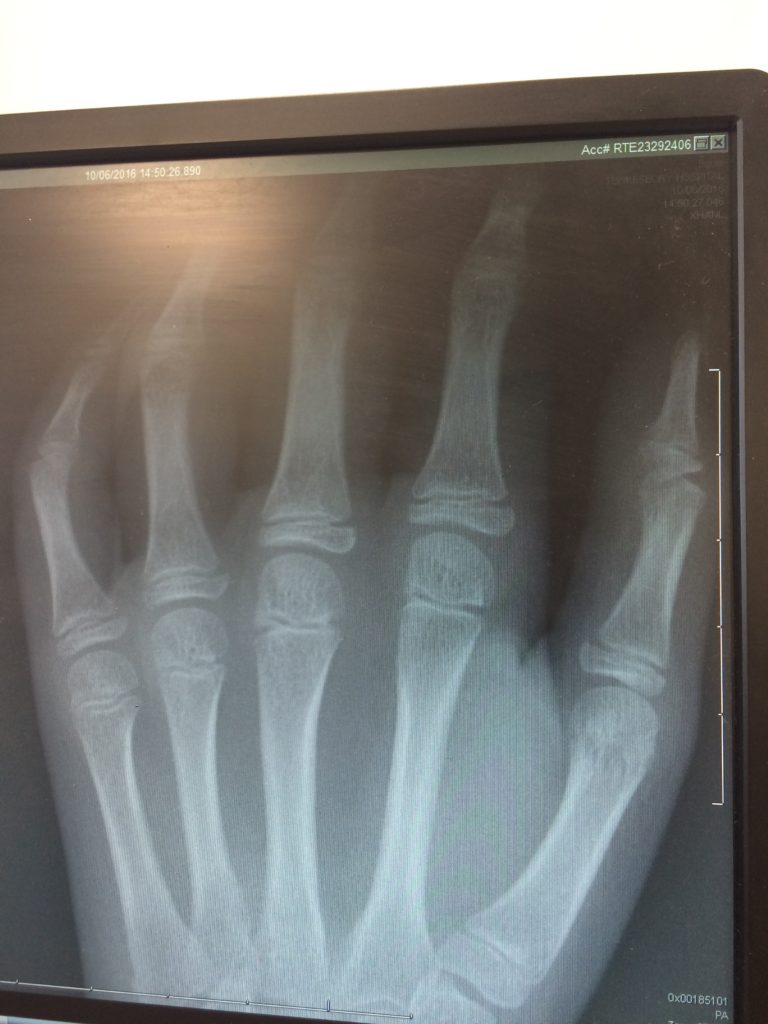 Eventually, the nurse called us back in. She’d found that the knuckle had been very slightly chipped, at the exact point where my daughter was in pain, and there also a virtually invisible crack through it.

She strapped her fingers together and then bandaged her hand for extra support, which has the added benefit of preventing her from accidentally knocking it. She has a follow-up appointment today. I’m not sure how long it will take to heal, I’m guessing it won’t be too long.

So it wasn’t sprained or strained or badly bruised. She really had hurt herself ‘properly’. I felt bad for waiting three days to get it checked, but I’ve had far too many A&E trips with her where it turned out to be nothing.

She is the girl who cried wolf. 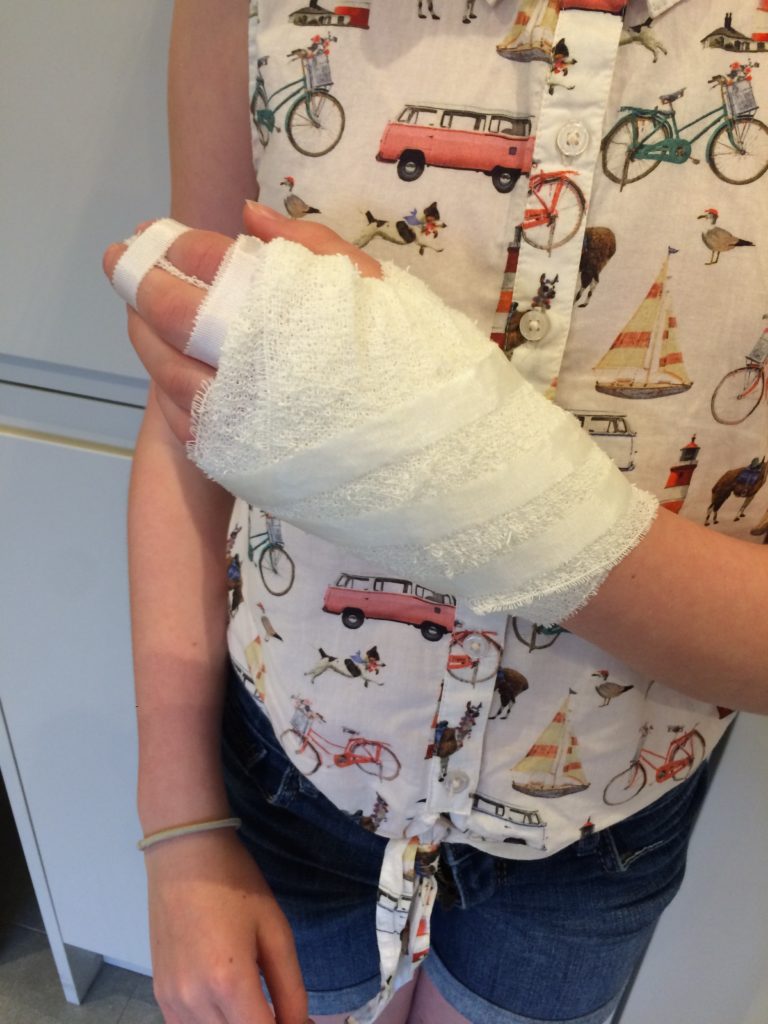