Great. A professional panto and they’ve got kids crawling around on an unbrushed floor in a rehearsal room picking up ‘stuff’ in their knees.

Removal of the leggings revealed not one, not two, but three splinters. The smaller two were easy to remove, but the third proved challenging to say the least. It wasn’t the biggest I’d ever seen (that prize is held by my younger son who had a trip to A&E in Italy), but it wasn’t far off. We got a grip of it, pulled, and the damn thing broke. So now it was embedded and impossible to get hold of.

It was painful and my daughter was crying. Her knee was red and swollen. We sprayed it with copious amounts of antiseptic and hoped for the best.

In the morning it was still there, still red, still swollen and still hurting. My daughter was limping.

My husband kept saying it would come out on its own, but in the meantime it was painful and my daughter had to dance at rehearsals.

So I decided to phone the doctor. I was sure a nurse could get it out for her.

But apparently they couldn’t as there was nothing to get hold of. I would have to take her to A&E.

A&E? For a splinter? Have you ever heard anything so stupid?

Regular readers will know we are serial botherers of A&E and I’m not proud of it. The start of this year was ridiculous with planned and unplanned hospital visits – my daughter and her bad foot and broken finger, plus me and my bad leg and my awful skin. I never wanted to see the hospital again.

I pondered it for a while, but realised I had no choice. So I picked her up from school and headed for the hospital.

I was apologetic to the receptionists, but they were friendly and lovely and didn’t think we were stupid.

She was seen immediately and I was apologetic to the nurses. They didn’t think we were stupid either.

The nurse gradually dug into her skin using something that looked like a pin. My daughter was brilliant, she just lay back and didn’t flinch. The knee kept bleeding and the nurse kept wiping it away and kept on digging.

The splinter was bigger and deeper than she’d first thought. It hadn’t gone in horizontally just below the surface like they normally do, it had gone downwards. She offered my daughter local anaesthetic to take the pain away as she was going to have to go deeper, but my daughter refused. I could see she was in pain from the way she was breathing and gritting her teeth, but she carried on being brave.

And then this came out. 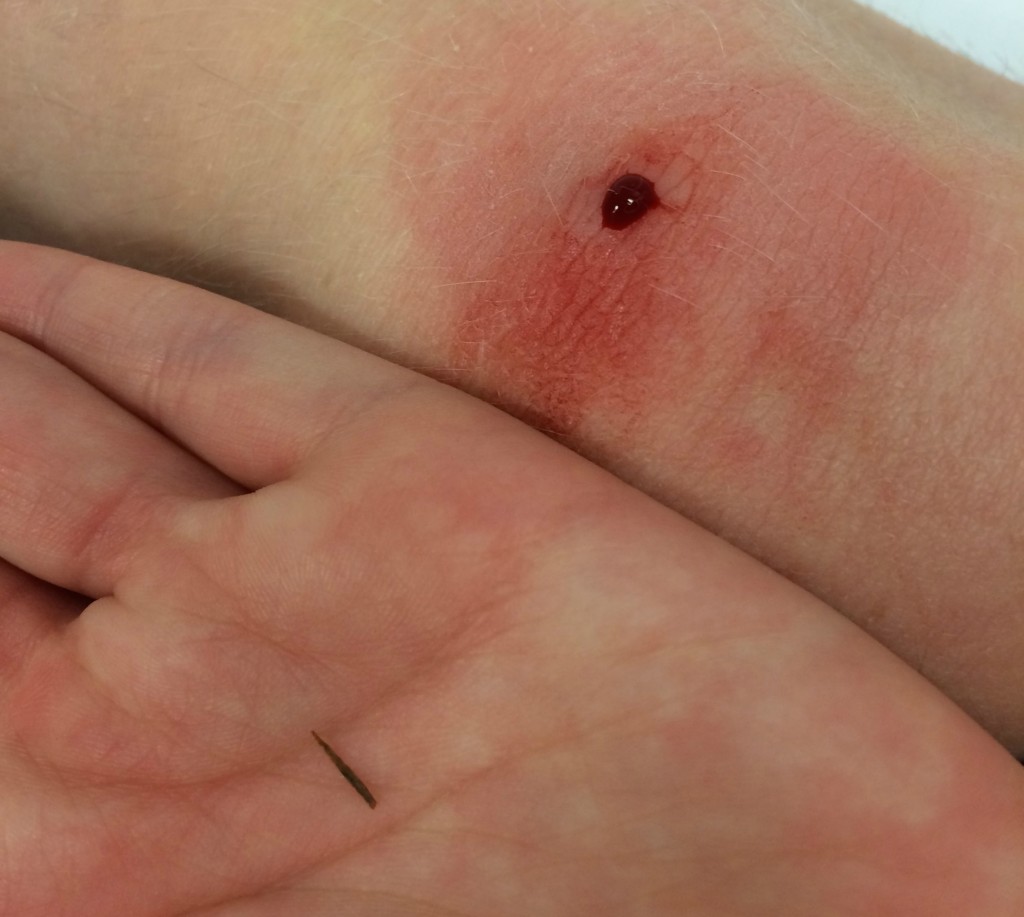 The nurse said there is no way it would have come out on its own and it would have got infected if it had been left there. So we did do the right thing by going to A&E.

She cried all the way back to school because it hurt so much.

Who knew a splinter could cause so much trouble?