My daughter and the unhealthy lifestyle

Home » Family » My daughter and the unhealthy lifestyle

At first glance, my daughter has a very healthy lifestyle. She has five dance classes a week and is a regular Parkrunner. She loves school PE lessons and is currently training for an inter-school athletics competition.

But, scratch the surface, and she actually doesn’t have the healthiest of lifestyles after all.

Her dance lessons means she tends to eat around 6.30pm, which isn’t ideal for a slow eater. Inevitably it means she goes to bed late. She then faffs around getting to bed and then struggles to fall asleep. On a good night, she will be asleep at 10. On an ordinary night it will be 10. 15. On a bad night it could be 11.30. A 10 year old needs 9 hours and 45 minutes sleep a night. She is averaging at least an hour less than this every single night.

She is a very fussy eater with a small appetite. Even at the age of 10, she believes the only reason for clearing a plate (or eating what you can get away with from a plate) is so that you can have pudding. She LOVES sweet food. She really doesn’t like fruit or vegetables. She can sit for an hour, pushing peas and sweetcorn around a plate. Pizza, potato waffles and baked beans will disappear a whole lot faster.

Her main source of five-a-day (well, three-a-day) is juice. Not homemade juice in a Nutribullet, but orange juice and apple juice from Tesco or Sainsburys. You know, the juice that you’re only supposed to drink once a day because it’s so full of sugar (albeit natural sugar). Juice is also her main source of hydration.

On a school day, she will drink orange juice for breakfast, then drink nothing until she gets home and drinks an overpriced Innocent Kids smoothie carton. She will have a glass of apple juice with her tea, which she will often forget and be nagged to finish at 7.45pm, then she will have a glass of squash before bed. That’s it. Nothing else.

Unsurprisingly, she often comes out of school with headaches. School will only let her take a bottle of water. I used to agree with this policy, but lately I’ve started to disagree. Because she doesn’t like water. I love water, but even I would struggle to drink it out of a plastic bottle that has sat on a trolley in a hot classroom all day. Bleurgh!

Less than two weeks after she was off school ill, she had another day off ill. It was an almost identical situation. She came out of school on Monday with a bad headache. It was worse than her usual dehydration headache. She was clearly ill. Again. So I didn’t make the mistake of sending her to school the next day. She had a day off.

It was a bit annoying and a bit inconvenient, but it was also a bit worrying. Hopefully it was just a blip, a coincidence. Hopefully there’s nothing underlying that’s causing her to get ill so often.

I don’t know the answer, but I do know that I’ve started sneaking squash into her pink water bottle. It *hardly* looks different. OK, it does. But if the school have issues with it, they can talk to me.

My daughter has taken a water bottle to school and brought it home full every day for six years. She now regularly comes out of school with a headache and has been off ill twice in two weeks. Water may be ‘healthier’, but it’s not if she isn’t drinking it. If drinking squash can stop her getting headaches (and maybe even stop her getting ill), that’s far healthier. 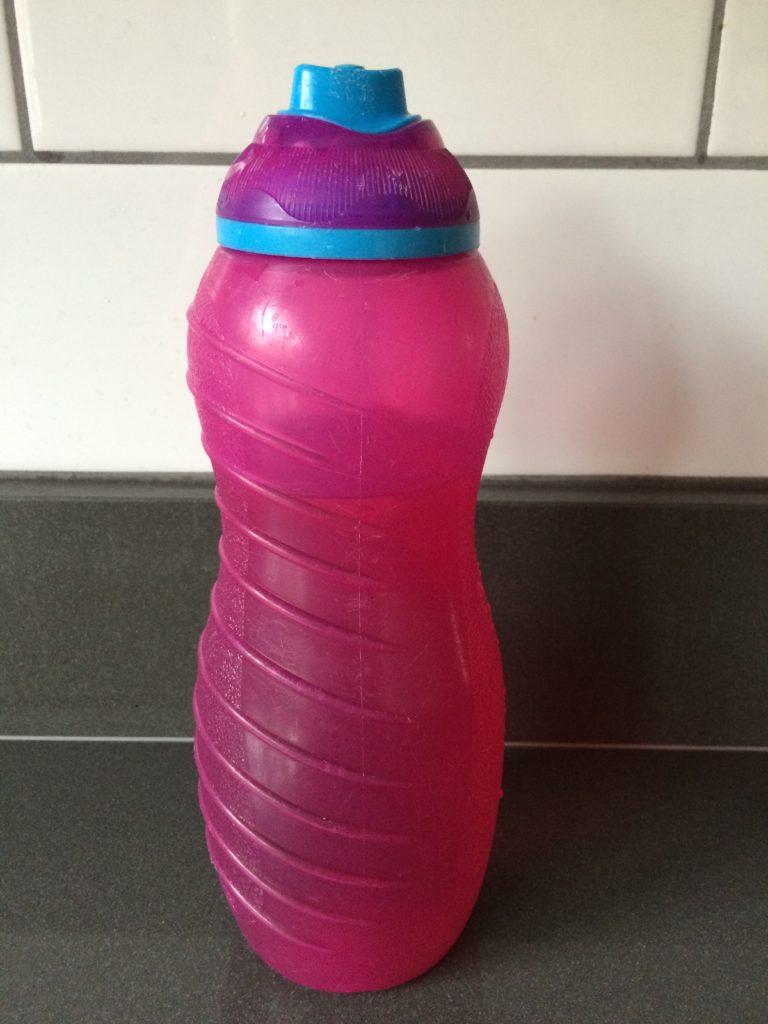 Can you tell it’s blackcurrant and not water?