Fifteen?! How on earth did that happen?!

I’m not going to lie to you and say it seems like only yesterday that he was born. Because it doesn’t. I can barely remember life before him. I can’t really remember him as a baby or a toddler either. Having three kids in under five years tends to have that effect on the memory. I guess my memories aren’t that clear until all of the kids were proper little humans and out of nappies, from when he was about 9 or 10. Thinking back, he must have been so little. But he’s never really seemed like a little boy. The eldest never does. The eldest always has to grow up that bit quicker.

And now he really is grown up. Nearly.

A lot has changed with my biggest boy in the last year, both physically and in his attitude. Some good, some not so good. Thanks for that, puberty!

He certainly looks grown up now. When we went to Wychwood Festival the other week, the staff took one look at him and announced that he was an adult. Having been small as a baby and toddler and average-sized throughout his school years, he’s suddenly big for his age.

He only overtook me last summer. Now he’s as tall as his Grandpa (who we always thought was 6′) and taller than his very tall auntie. His feet are bigger than his dad’s. His shoulders are wide and his face has lost its freshness and taken on a distinctly manly shape. He’s gone from a cute little boy to a good-looking young man.

At home, he ticks all the teenage boxes – nicks lots of food, leaves towels all over the bathroom, sleeps too long in the morning, goes to bed too late at night, picks on his brother and sister… Check, check, check and check.

He can be an awkward so-and-so and I particularly dislike him picking on his brother and sister, but I do have to remind myself he’s not all that bad. He doesn’t argue with me or his dad, answer us back or have strops. And he’s not into drink, drugs, smoking or girls. So, he’s a pretty good 15 year old, really.

And adults adore him. He has a way with friends’ parents and Scout leaders. He is polite and helpful and talks in a very grown up way. If he needs to find out something about Explorers, he just phones up the leader. When he talks to us, he mutters and mumbles. When he goes on the phone to an Explorers leader, he is confident, clear and chatty. I don’t know where this boy came from, but I guess we must have done something right with him!

This was the year he moved on from Scouts, but he didn’t give up Scouting, he became an Explorer. And he loves Explorers every bit as much as he loved Scouts. Personally, I don’t love it as much, as it’s not just down the road and there isn’t a minibus to take him on camps, so I’ve had to give him a lot more lifts! But it’s keeping him out of mischief, so I’m not complaining.

This was also the year he became even more obsessed with mountains and climbed Ben Nevis . If he’s in the mood for a chat, he will pretty much always talk about mountains he wants to climb. Of course, I want his dreams to come true, but some of the mountains do scare me a lot.

This was also the year, I’m VERY pleased to say, that he started to take his education just a little bit more seriously. He coasted along at secondary school for three years, but now he’s in year 10, he’s trying a little bit harder. He did very well in his year 10 exams  – to his teachers’ surprise, I think, and is now talking about going to grammar school for 6th Form. I think grammar school would allow him to focus better and hopefully come out with A Levels which are a fairer reflection of his abilities than if he continued to coast at his comprehensive school.

So that’s my boy. Another year older, another year wiser and a whole lot bigger. He’ll have an exciting and, at times, hard year ahead, and will have done all of his GCSEs before his 16th birthday.

I’m hoping he continues to work hard at school, continues to charm adults and continues to love Explorers, but perhaps eases up on being mean to his siblings and leaving towels on the bathroom floor. 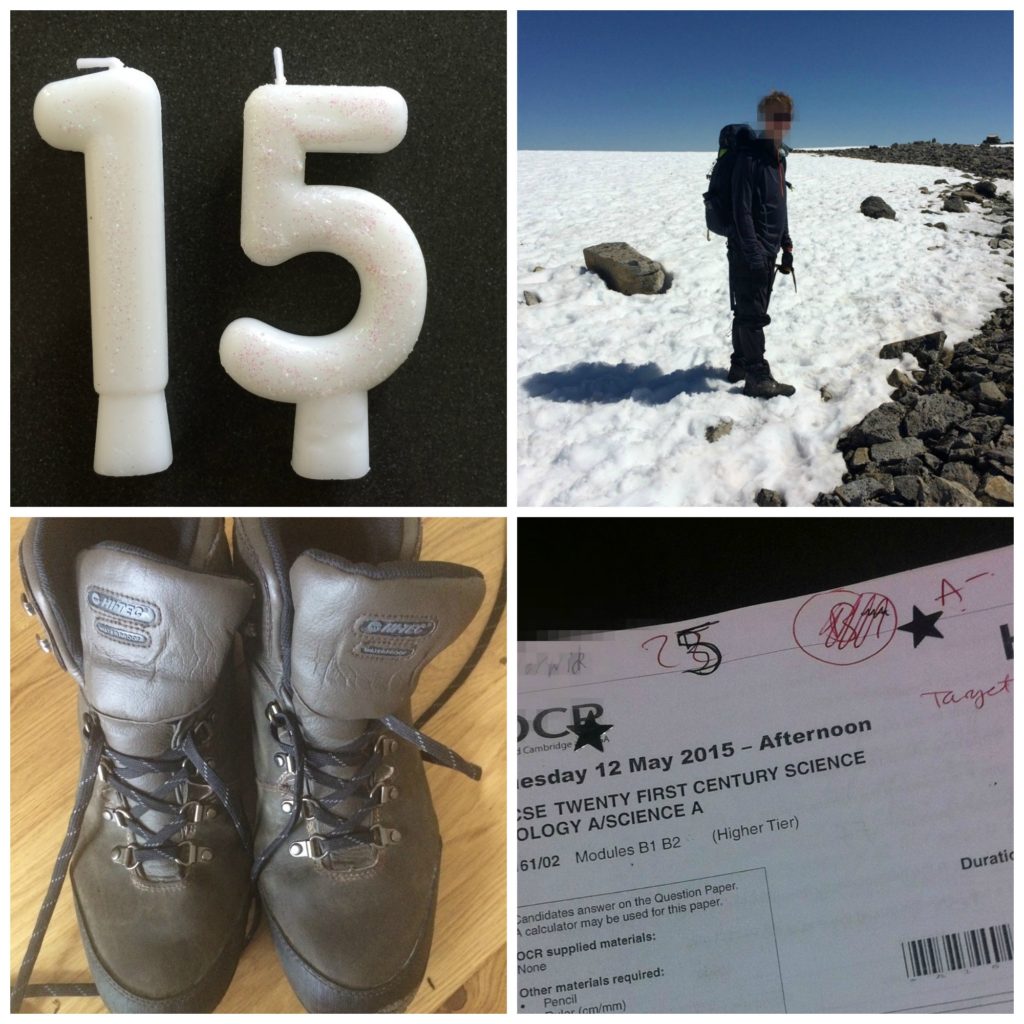