Just before my younger son started grammar school, I listened to the head teacher speak and I was in awe. In awe of what an amazing school my son was going to. Highly academic, yes, but that wasn’t all. This is a school that cares for its pupils and treats them all as individuals. It is a school which values and encourages sport, music, drama and art. And I felt very, very happy that my son had the opportunity to go there.

But I also felt a bit sad. Sad for my eldest that he would have never have this.

And then I realised. He COULD have this. Because my son’s school doubles its intake in year 12. Yes, the required grades to get in are still high, but they’re lower than year 7, and they’re by no means impossible. Excited, I told my eldest about my great idea.

And he rejected it. Just like that. Because his brother’s school was full of ‘snobs and geeks’ (it totally isn’t). My biggest boy was staying put for 6th Form and that was the end of discussion.

Fast forward a few months and my eldest, now well into year 10 and his GCSE courses, announced that he wanted to go to another grammar school for 6th Form. I was gobsmacked, but VERY, very pleased.

Since then, he’s researched a number of grammar schools in the area and their pass marks. He’s even opened his mind a little bit to the idea of applying to his brother’s school.

This is a HUGE turnaround. My eldest has always lacked aspiration and lacked a belief in his own ability. Sadly, his comprehensive school seems content to let him coast and be above average, but he’s not been achieving anywhere near what he’s capable of. Living with super-talented siblings isn’t easy, nor is having problems with his handwriting. He is a lot brighter than he gives himself credit for.

His year 10 report, containing predictions for his GCSE results, made depressing reading. I wanted to see mainly Bs, with a couple of As and a couple of Cs. That wasn’t what I was seeing.

But the results of his year 10 exams gave me more than a glimmer of hope – they were way better than his predictions. He’d done some revision, not what I’d consider ‘enough’, but a lot more than he’d done in the past. 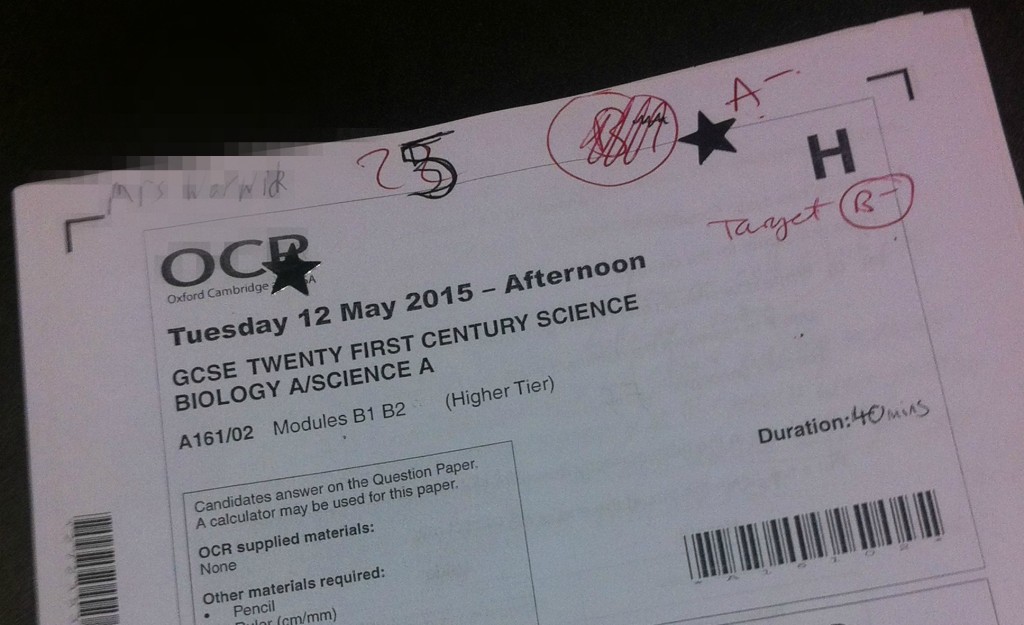 It’s impossible to push a 14 year old boy into doing what he doesn’t want to do. He needs to take the decision to do it when the time feels right for him. Finally, my son is starting to believe himself and starting to aim a bit higher. It is so good to see and I really hope it will continue.

Dare I start to dream that I will have three kids at grammar school come September 2017?