The other day, I found this on the floor. 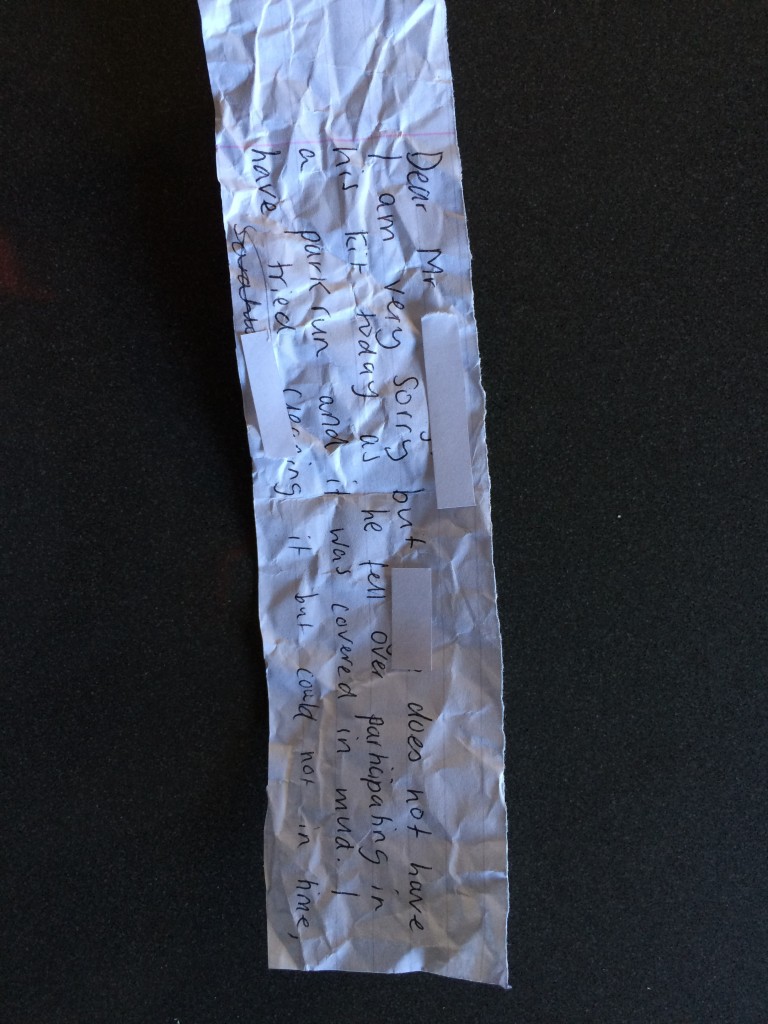 I doubt many teachers would be fooled by it. They weren’t actually born yesterday (I know for a fact this one wasn’t – as he was a teacher at the school when I was there). They wouldn’t expect a parent to write a letter on the smallest scrap of paper ripped off the bottom of an exercise book page. Nor would they believe many parents would be so inept that they couldn’t wash a PE kit that had allegedly got dirty on Saturday in time for Monday.

I’ll admit, I was disappointed in my son. I thought we’d brought him up better than that.

In his younger years, he would have panicked and called me to take his PE kit to him. Now he knows I would probably refuse as he’s old enough to take responsibility for himself. He also knows he would get in trouble at school for having no kit. So he was caught between a rock and a hard place, but this really isn’t the answer.

I’m very proud that he’s been picked for senior orchestra, but he went to the first rehearsal and was thoroughly underwhelmed. Of course it’s full of ‘geeks’ who were boring and didn’t speak to him. He didn’t want to go again. But did he make the effort to speak to people, or did he just judge them?

It’s a long time since I was at secondary school, but I remember exactly how it is – there’s the cool kids, the naughty kids and there’s the geeks. Then there was me and my friends – too cool to be geeks, too geeky to be cool. That’s where my son is too. You put yourself in a box and you put everyone else in a box too. You think you can’t get on with anyone not in your box because they’re not like you. But the reality is, you don’t even try. You don’t try to find out if you have things in common or a similar sense of humour. You just dismiss them.

I persuaded him to give orchestra one more try. He’s always saying how we’re proud of his siblings and we’re not proud of him (that’s not true, I was especially proud of his Scouting achievements). But when his brother is doing brilliantly in football and rugby and his sister is doing brilliantly in dance, that’s something concrete. Something we can look at and say ‘yes, they’ve made us proud’. It’s harder to be proud when someone is lying on their bed, watching a film.

Which is why I wanted him to do orchestra. I wanted him to achieve something and know that we were proud of him – and hopefully to feel proud of himself. His teacher had faith in him by putting him forward, I didn’t want him to let her, himself or us down.

So he gave orchestra a try. It was better. He will stay until at least the Christmas concert.

I’m disappointed in my son’s defeatist attitude towards the orchestra and the way he judges people without getting to know them, but I’m pleased he’s going to rise above that and give it a go.

Now I just need to know I trust him. Because every time he tells me something that seems even remotely out of the ordinary, I’m going to question whether he’s actually telling the truth.