The Lie by C L Taylor

Generally, books take me two or three weeks to read (apart from The Woman Who Stole My Life, which for some reason took me about six). I’d love to read them more quickly, but I just don’t have the time! But I read The Lie in five days flat.

It feels like pretty much every book I read these days has a bit set in the present day and flashbacks to the past. Is that ALL books, or just the books I read? The Lie was no exception.

Jane Hughes has a secret. She isn’t really Jane Hughes. Five years previously, she had changed her identity, but now somebody has found out who she really is.

This book is scary and menacing. Jane is under threat in the present day and in the story which unfolds from five years previously, which gets more and more terrifying. I’m OK reading thrillers about policemen being threatened by serial killers (that’s basically all of the Jo Nesbo Harry Hole books), but this isn’t really a thriller. These are four young women who are in danger and it feels almost believable.

If I had one criticism, I would say that the writing isn’t the best. I do enjoy a well-written book and I’ve read lots of them recently – all different styles of writing, but all good writing. The dialogue in particular is a bit clunky (although partly that’s in the nature of the story and the situation the characters are in). But, for me, the plot unfolded so quickly and I was so desperate to know what happened next that I let the not-entirely-brilliant writing go.

If you don’t mind being scared and shocked, The Lie is a totally addictive read. 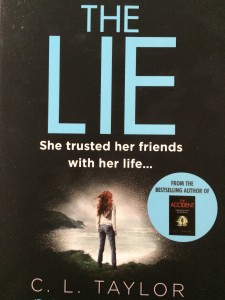