The Woman who Stole my Life by Marian Keyes

It took me AGES to read this book. Not because it was a bad book, but because the kids have been at home for the school holidays and I haven’t had my usual reading time at lunchtime. It’s a shame, because I would really have liked the chance to get into it. But, despite taking far too long to read, I did really enjoy it.

Stella Sweeney, a married mum of two teenagers, lets a Range Rover out at a junction, thinking it will be good karma. What follows takes her on a huge journey to stardom and back to normality. So was it good karma or bad?

The start of the book jumps from Stella in the present (four years on from the Range Rover incident), as a writer struggling with her second book, and Stella four years previously.

Gradually the story of the life-changing incident of four years before emerges.

It is classic Marian Keyes, combining humorous writing with a difficult and moving subject matter. It’s an entertaining story, with twists and turns on the way, and Stella is a likeable character.

It’s an easy read, but that doesn’t mean it’s any less enjoyable. I would recommend this book to Keyes fans and fans of humorous books alike. 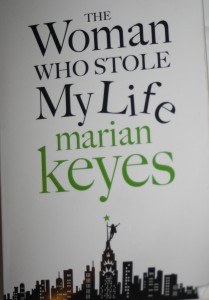