I’ve written before about how much I dislike our bedroom. Some readers might have thought it was just a cunning way for me to make money from sponsored posts, but it’s all true! I really, really disliked it. It was too small and too cramped and too untidy. Yes, the lack of tidiness was our own fault, but we didn’t have enough space to keep things neatly. The bedroom isn’t even in the same ball park as our lovely loft conversion at our old house, but I just had to accept it. I just slept in there, I didn’t use it for anything else and I figured that the rest of the house is pretty amazing, so it’s not all bad really.

But my husband wouldn’t accept it. He thought it could be better. Either it was going to get better, or he was going to move upstairs and swap rooms with our eldest. Our eldest’s room always seems bigger than ours, but it’s probably the same size. It has a large fitted wardrobe (I would LOVE fitted wardrobes) and is generally a nicer room. BUT IT HAS NO ENSUITE. Now our ensuite is a total sh*t-hole, but I’d still rather have it than not have it. I didn’t want to move upstairs.

So, after deciding to give up rugby, we had a bit of time on our hands on Sunday morning and we agreed to tidy it – sort it out and get rid of some of the piles of papers, clear out a few old clothes so we can actually shut the drawers, get rid of the TV we don’t use that’s been sitting on its side next to the bed since January last year…

Then I just went for a quick walk in the (very rare) sun with the kids, my parents, my sister and brother-in-law and niece and nephew.

When I got back, all hell had been let loose. A lot of eggs had been broken, but the omelette was far from made.

It was truly hideous, but it was surprising how quickly it took shape. I’m the first to admit that I’m not very good at tidying and organising and try to avoid it whenever I can, but I thought I’d better do my bit, seeing as he was working so hard.

The hardest bit was sacrificing my large oak bookshelf. As an avid reader, books are important to me. I like to surround myself with them (as my bedside table will testify). My husband doesn’t get this at all. We are most definitely not on the same page (see what I did there) when it comes to books. He was going to put it in the GARAGE. My lovely bookshelf and all of my lovely books. Sacrilege! But my eldest decided to have the shelf, which didn’t seem quite so bad and I displayed my favourite books on the other shelves in the house.

My husband also insisted we get rid of our chest of drawers. I’ll be honest, apart from my pyjamas and my waterproof trousers, the drawers (all six of them) were largely full of crap. They served as a useful place to stash things like 3D glasses and banners from birthdays four years ago. They were also a good place to pile paper before you found a real home for it in about a year’s time. So the drawers went in the garage.

And, suddenly, I very nearly had the bedroom I wanted. There was space on the floor. There was no clutter. The wardrobes only contained clothes we actually wear – and they were well-organised. The room felt lighter. I could see the photos on the wall.

It’s not perfect (I still need somewhere to store my pyjamas), but the reorganised bedroom is like a small miracle. It’s actually a pleasure to go to bed now. 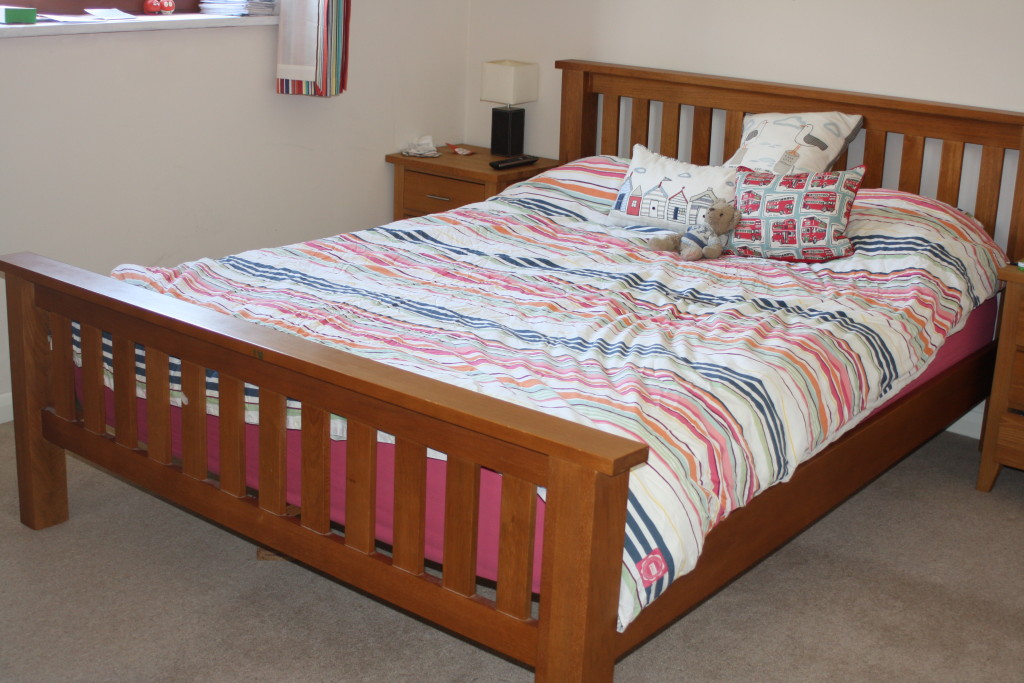 The ‘after’ picture. There are no ‘before’ pictures.