First half marathon training run of the year

Home » Family » First half marathon training run of the year

I run all year round. I love it. For most of the year, I run just over four miles, three times a week (or four if the exact alignment of the planets means I don’t have too many hospital appointments or urgent shopping trips interrupting my working day).  But about 12 weeks before a half marathon, I increase my distance. I also cut down my number of runs to twice a week – partly so I don’t overdo it and partly because fitting kids and work round long runs is hard enough without doing it three times a week.

Many years ago, before I even started doing half marathons, my husband hit on eight miles as being a good place to start training. And I’ve stuck with that ever since. To be honest, it probably isn’t such a good idea. I should probably go from four miles to six and then to eight, but I don’t. I just jump straight to eight miles. Back in those days, before I used to run with an app, I also believed my four mile run was a five mile run, so it didn’t feel like such a step up.

Twelve weeks to the Cheltenham half marathon came and went. So did 11 weeks. Not only was I not running eight miles, I was barely running four. The last few weeks had been so manic, that I was averaging about one run a week. But when it got to 10 weeks to the half marathon, I knew I just had to get out there and do it.

I don’t know what it is about my legs. On the day I get up intending to do a long run, they always seem to hurt. Maybe it’s just me being more in tune with my body and noticing aches and pains I wouldn’t otherwise notice? But I was going to run, whatever happened.

I started off quickly, then I realised I needed to ease off a bit as I was running twice as far as usual and it was warm. Nine minute miles would be fine for a first go – my aim was to complete the run, not to break records and half kill myself in the process.

As soon as I started running, the tops of both my legs started to ache. Not an ache I’m used to. It was more of a muscular pain, whereas my pain tends to be more in my joints (and my toenails!). It would ease, I just needed to keep running.

As I crossed a narrow railway bridge less than a mile from home – one that I cross on every single run I ever go on – I whacked my elbow hard on the metal bridge. I have never done that before. And the pain! Oh, the pain! It was excruciating. It brought tears to my eyes. I couldn’t move my arm, so I just hobbled with my arm held out straight. But the pain was so bad it stopped me from running. I seriously contemplated sitting on the grass verge there and then, but I kept telling myself it was just my elbow – elbows hurt badly and then they stop.

And so it did stop. And so did the aching legs.

With the whack to the elbow, I was running slower than I would have liked – over nine minutes miles. I picked up the pace just a little bit.

I carried on running. I felt pretty good for a person who hadn’t run for a week and hadn’t run over four miles for 10 months. It was warm, but cloudy, thank goodness.

I kept on running. I was halfway. I ran along the long, straight, boring road. I ran through the town. I ran up the hill out of town (OK, I may have walked a little bit of the hill). My ITB started to hurt, but not so badly I needed to stop, thank goodness. I don’t have time to be messing around sorting out my ITB – I’ve got a half marathon to train for!

And then I was on the home straight. I’m not sure if the two trains at the level crossing half a mile from home were welcome or an irritation. Probably a bit of both.

I was aching, my elbow was bruised and swollen, but I’d made it!

I had a cold bath, did my stretches and rolled my ITB. I was back in the game. I could run eight miles. In another six or seven weeks, I’ll be running 12! 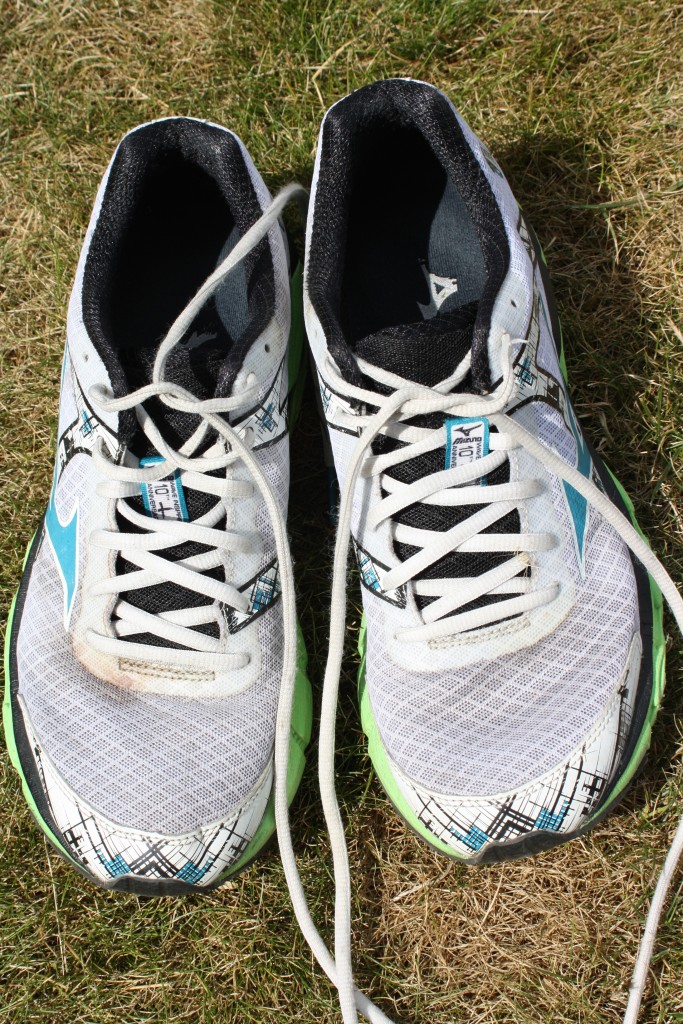