My younger son went away on his year 6 residential on Monday. He was very excited, and rightly so. It will be an amazing experience – a chance to unwind after SATs, a final opportunity to relax and enjoy himself with his old friends (he’s the only one going to his new school), a chance to see new places, try new things, see the teachers in a different light…

For most year 6s, the residential is a highlight of their time at primary school. They’re going out on a high.

We’re in uncharted territory – the first time he’s been away for four nights. He managed three nights on Scout camp last summer and has done a few two-night camps. I know he won’t be missing us for one second – he’ll be too busy and having too much fun. His brother and sister say they don’t miss him and, strangely, I believe them. Strange, because they both get on so well with him.

There’s a gap in my life. A hole. I feel out of sorts. Detached. Unenthusiastic. Nothing feels quite right.

The house feels bigger and emptier without him.

Every time someone goes away, it changes the dynamic of the household. When my eldest went away, it made for a more harmonious family. And I don’t feel his loss so strongly – he’s already done three full weeks away, plus countless weekends. We’re more used to him not being there.

With my younger son away, there’s just the lack of him. We’re no more harmonious. There’s as much conflict between his brother and sister as ever, but without him to distract from it.

There’s nobody collapsing onto me at 3.50pm with a mournful face, asking ‘When’s tea?’ in a pitiful voice. How will he cope without a biscuit cupboard to raid while he’s away?

There’s nobody kicking a ball round the house.

There’s nobody on the Xbox (which isn’t a bad thing).

There’s nobody to chat to his sister at breakfast.

There’s no ‘banter’ with his brother.

There’s only one child to walk to and from school. And it turns out that, even with only one child, we are still incapable of leaving the house on time (so now I know whose fault it is!).

There’s no Angry Birds socks in the wash. Or on the floor.

He’ll be home tomorrow and I’m feeling VERY sad that I won’t be here to see him. I’ll be at Britmums Live. I was genuinely tempted to give up my ticket because I feel so wrong about not being here. I know it doesn’t really matter. It probably doesn’t even matter to him. But it matters to me. I haven’t seen him all week and I really want to see him.

But I guess it will just have to wait one more day. The monologues will be about his adventures, the Angry Birds socks will be back on the floor, the Xbox will be on and the biscuit supplies will be going down. 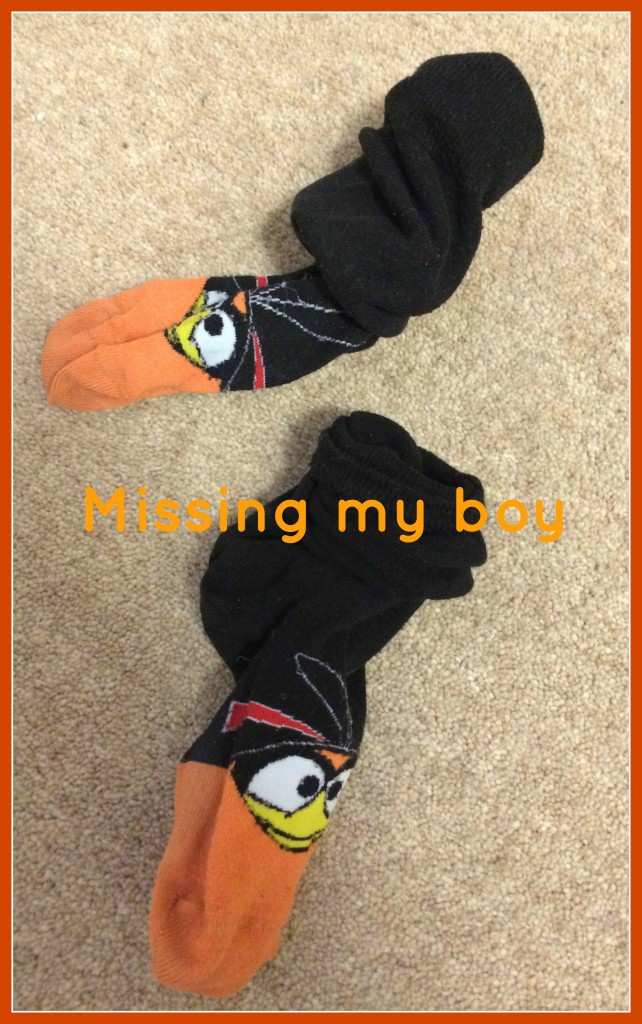