Every year every class at our primary school puts on an assembly for the school – and parents are invited too. I haven’t blogged about them much before, yet every year they make me really proud. I’ve seen my son play Henry VIII and my daughter play Captain Scott.

If one assembly was going to be special, it was going to be my younger son’s year 6 assembly, just six weeks before he leaves primary school forever. For many years, year 6s nationally have studied World War II, but this year the curriculum changed and WWII became a year 5 topic. Which seems pretty unfair on the year 6s who’ve looked forward to it and would miss out. Luckily, our school decided the year 6s wouldn’t miss out.

With the SATs over, my son’s class had time to focus on the assembly and do a really good job.

My son was Neville Chamberlain. The assembly opened with a BBC announcer, who then handed over to Neville Chamberlain. He was fantastic! He’d got Neville Chamberlain’s voice absolutely spot-on. I wasn’t supposed to cry at this assembly – tears should be reserved for the leavers’ assembly, but I felt my eyes watering as soon as he spoke. Interestingly, this was his very first day at school wearing his contact lenses . His hair is shorter than usual at the moment and I realised he looked exactly like he looked when he started school – a few months before he got his glasses. 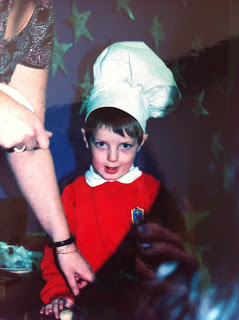 As soon as Neville Chamberlain had finished his announcement, a group of children boarded the train to the countryside as refugees. With a bit of a shortage of refugees, Neville Chamberlain whipped his tie and jacket off and was transformed to a refugee! Groups of ‘adults’ selected refugees and took them off to their homes. It was lovely too see even the least confident children talking.

One girl did a solo of ‘We’ll Meet Again’ as Vera Lynn and two other girls sang ‘Pack Up Your Troubles’ accompanied by my son’s best friend on the piano. My son’s best friend was also Winston Churchill (the cigar and padding raised a giggle), as well as a refugee.

When the end of the war was announced, 12 of the children started dancing, including my son. My son dances a bit at home with his sister (when their brother isn’t looking!), but is not the sort of child to dance in public. The routine was incredibly long and involved children dancing with partners. I wonder how much persuasion it took to get them to do that?

The assembly ended with some incredibly moving poems read about by the children.

It was the best assembly I’d ever seen, fittingly for their last weeks at primary school. I’m going to be an emotional wreck when it comes to the leavers’ assembly!