The acne and the hair dye

Home » Family » The acne and the hair dye

Every few weeks for the last five years, my mum has dyed my hair. We use Nice ‘n’ Easy semi-permanent. The stuff that’s supposed to last 24 washes, but actually lasts about eight. But it covers the majority of my grey and that’s all that matters.

When my skin started going really bad at the start of the year, my mum worried that it was due to the hair dye and refused to dye it until it got better. I didn’t think it was connected, but I couldn’t make her dye my hair. Luckily, thanks to some nasty, hardcore antibiotics, my skin started to stabilise and my mum dyed my hair before we went on holiday to Center Parcs.

Yes, my hair had been dyed, but my antibiotics had been cut to just one dose a day and I was also a swimming a lot (the chlorine could effect it, right?). So it almost certainly had NOTHING to do with the hair dye.

My skin continued to get worse and worse when we got home. And so did my hair.

I had a thick chunk of grey at the front of my hair. Kind of like Caitlin Moran, but without being remotely cool.

Skin of a teenager. Hair of an old lady.

But my mum was on hair dye strike again, so what could I do? Yes, I COULD have done it myself/ got my husband to do it, but that would have been unfair. I would have been betraying my mum. She was only refusing to dye my hair because she cares.

There was only one solution. I would ask the dermatologist! So at my last appointment, I brandished my box of Nice ‘n’ Easy and said, ‘Is it OK to use this?’.

I practically punched the air right there.

My face might look like absolute sh*t, but at least my hair would be a normal colour.

I could barely keep the triumph out of my voice when I rang my mum to break the news. She came to dye my hair the next day. I told her she would be doing it again before Britmums Live. Now I’m free to dye my hair, it will be getting dyed as often as it blimmin’ well likes!

But my medication had changed again. And it was exactly a month since it last went really bad. Maybe a monthly cycle thing? It would probably clear up really quickly, wouldn’t it?

I don’t know. I really don’t know what’s causing it. But I realise I can’t take the risk.

It’s possible my mum has been right all along. So I’ll be going to Britmums Live with grey hair. I’m hoping my skin will have eased by then.

Grey hair is sh*t. Awful skin is a lot worse. 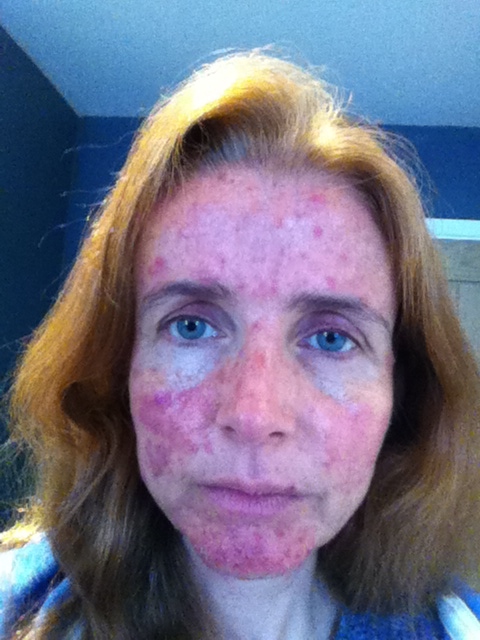 The hair’s looking a lot better, but LOOK AT THAT SKIN! 🙁