The middle child (taking my eye off the ball)

Home » Family » The middle child (taking my eye off the ball)

Of all my kids, my younger son has always been the easiest. He has never been any trouble at all.

My eldest has always been the one who has challenged me the most. Not surprising, really, because everything he does is a first time – he’s paving the way for his siblings and we’re all making mistakes along the way. Poor kid.

My daughter is, and always has been, an utter delight. But she is a bit highly strung and does have a slight tendency towards being demanding.

Then there’s my younger son, the middle child. He slept for the first 12 weeks of his life and when he eventually opened his eyes, he was one seriously chilled-out, happy boy. He was instantly his brother’s best friend and gave us no worries with eating, sleeping, potty training or anything else. He was happy, relaxed and everything you would want from a son. He was brilliant. 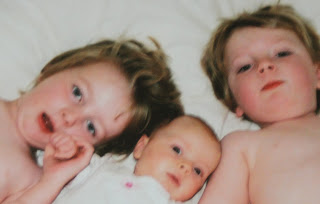 The way they were – the challenging one, the stressy one and the brilliant one

But the problem with brilliant kids is you take your eye off the ball. You’re too busy chasing the others, trying to get them to eat bananas.

My eldest and my daughter are notoriously fussy eaters. Getting them to eat at all and getting them to eat a diet which is halfway healthy has been a battle for nearly 14 years now. My vegetarian eldest is finally coming through it, but for years he would have happily lived on pizza, bread, potato waffles and Weetabix. Yep, no protein and no fruit and vegetables. My daughter eats meat, but has a tiny appetite, eats at the speed of a snail and is obsessed with sweet food. And she won’t eat fruit and vegetables either. Last year, the whole thing came and bit her on the bum, leaving her with chronic constipation, which is never more than a banana away, even now.

So every day I nag my eldest to eat a banana (he voluntarily eats apples) and I give my daughter a banana after school, because she doesn’t like any other fruit.

Now he’s older, we expect my eldest to be a bit more responsible and help out around the house. He’s not great, but he’s getting better and we even pay him to hoover and cut the grass. My daughter is pretty clean and tidy anyway. She helps out of her own accord and loves to do things like get ready for holidays, as well as wrap presents and write cards. When you’re under a lot of pressure, having someone around to help out like that is a godsend.

And then I realised. Someone is sailing completely under the radar.

I’ve taken my eye completely off the ball.

My younger son, my amazing, chilled out, no trouble-at-all boy is getting away with murder.

The one child who was never a fussy eater refuses to try new foods (his siblings try them, even if nine times out of 10 they hate them) and never eats any fruit. Yes, he might eat his peas and sweetcorn without making a fuss and will eat his vegetables at school dinners, but his five-a-day often consists of just two. Baked beans and apple juice. His brother and sister, the fussy pair, often reach the dizzy heights of three or even four a day.

His bedroom is a tip. Clothes come off, they stay there and get buried. They don’t make it to the wash. He doesn’t take his own plate after meals and he drops chocolate wrappers in his room. He never puts anything in the recycling, doesn’t offer to carry bags – or even carry them when asked. He looks shocked if you ask him to lay the table.

I’ve spent so many years focusing on the more troublesome members of my family that they’re doing OK now. But my younger son is going to need a fair bit of encouragement to get him back on track.

Does anyone else have this with one of their kids?