Return to the dermatologist

Home » Uncategorized » Return to the dermatologist

Since I last went to the dermatologist, my skin has got a lot worse, then a bit better, then a bit worse and, finally, quite a lot better. It still looks weird, wrong, strange, not right. Ugly, even. But it’s improving. And that’s all that matters to me.

I’d been very low . Two weeks previously, I’d walked around Marks & Spencer on the brink of tears. Everyone I saw was so beautiful and so normal. And I knew how bad I looked. And I hated that. I hated that people were looking at me and wondering what was wrong with me. I just wanted to cry.

But, by the time I went to the dermatologist, I was feeling a lot more positive.

Before I’d even sat down, he’d assessed me and come up with his next plan of action.

He wasn’t as pleased with my progress as I was. He is going to hit it even harder. It will get better. It will be normal. Perfect, even. Like I’d never had spots at all.

So I have a new cocktail of drugs. I’m back up to 20mg of Roaccutane, after a month on 10mg. He’s now saying that coming off it all was probably a mistake. A couple of months ago, he said I would never go back on it. I’m still on antibiotics, but a more gentle one, one that hopefully shouldn’t leave a permanent horrible taste in my mouth, plus I’ve got a steroid cream. The spots don’t stand a chance.

There were two medical students in the room. He summarised what was going on with me in words that went ‘whoosh…’ straight over me head. He talked about the difference between acne and roscaea and how I’d had one, then the other, then both…

I didn’t follow a word, other than the use of the word ‘pustules’, which apparently I still have. Can you think of a more unpleasant word than ‘pustules’? I’m over pustules. I don’t want to have them. To be honest, I didn’t even think I had them. I’m feeling better. I’m telling myself I’m normal, although I’m aware I still have a big red mask all over my face, apart from my panda eyes of clear skin.

I wanted the students to know I wasn’t too bad, really. I showed them the pictures of when I was really bad. I wanted them to know that, even though I look awful and ugly, that it had been a whole lot worse. That I was really getting better.

‘You don’t have a blog about this, do you?’ asked the dermatologist.

What a strange question! Why would he ask that?

I don’t think he was prepared for THAT answer! 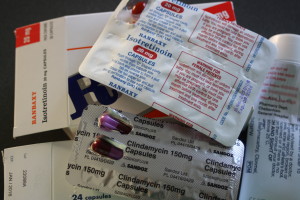