The Murder Bag by Tony Parsons

I have been a big fan of Tony Parsons ever since his first novel, Man and Boy, so was looking forward to getting to grips with his latest offering, The Murder Bag. I was especially pleased to see that it’s Parsons’ first crime novel. As regular readers of my book reviews will know, I love a good  crime novel.

The Murder Bag was my third crime novel in a row – I’d gone from Scandinavian (The Son) to American (Gone Girl), to British. I love a bit of variety in what I read, but I most say I do like a British story, with British language and culture. I like to recognise the place names and be able to picture them in reality as well as in my imagination.

So can Tony Parsons write a crime novel?

Of course he can!

It’s an easier read (in all senses of the word ‘easier’) than some crime novels and I raced through it. The story had me gripped and the characters were believable and likeable. There was no Oriental/ Asian connection as there is in so many of Parsons’ novels, but the main character, DC Max Wolfe, is still a single dad, as most of Parsons’ characters are.

There are twists and turns and it keeps you guessing. Although I did manage to guess a few bits right (go, me!).

This is an enjoyable page-turner, which focuses as much on human relationships as it does on murder and gore. I would definitely recommend it.

As a character, Max Wolfe could run and run. He doesn’t need to be limited to this one story. As it happens, days after I finished reading the book, I saw that the sequel, The Slaughter Man, was out in hardback. So, sadly, it’ll be a fair few months until I read that one, but I’m definitely looking forward to it. 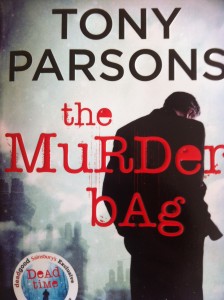