We used to see them running when my daughter went swimming. It looked good fun – serious runners and fun runners, adults and kids, all running together on a Saturday morning.

‘We’ll do that when you finish swimming lessons,’ I told my daughter.

She finished swimming lessons a year ago. We never did it.

She started running with me on a Sunday morning. She did pretty well, but then she hurt her ankle. Then she got really ill and couldn’t walk. (We’ve since discovered she’s got hypermobility in her ankles, which would explain why she had hurt them so many times in a year. We’ve got physio exercise to sort that.)

Running was abandoned for months. But suddenly she wanted to do Parkrun again. Now. This weekend. Her best friend has started doing it and anything she does, my daughter wants to do too.

So, last week, we found ourselves running our very first Parkrun. There were nearly 500 people there! Three laps of the park in surprisingly warm sunshine.

We set off slowly. I wanted her to run it all at her pace (even though I really struggle with the concept of running slowly – I’m itching to run fast!).

She did well, but soon she was hot and thirsty and her feet hurt. And we still had two laps to go. People were lapping us before we’d finished our first lap. There are people who take it VERY seriously. I never see that much sweat or hear people breathing that hard in a half-marathon. They really go for it.

As we finished our second lap, everyone around us was finishing the run and we still had another lap to go.

A bit of competition is all takes to motivate my daughter. There’s no way she was going to be last.

The pack was so thin now that every volunteer marshall gave us individual encouragement.

We were keeping pace with another woman and her daughter of a similar age to us and a younger woman, running slowly on her own. We all walked a bit and ran a bit. They overtook us, we overtook them, they overtook us again. I wasn’t going to let them beat us.

And she went. Fast. She sprinted past the other woman and her daughter and the young woman. Where did she get that energy from?

We finished in 38 minutes. There were 25 people after us. My daughter was tired and thirsty, but I think she enjoyed it. I certainly did! Saturdays are the one day of the week when I don’t get up and out of the house and, while many people would love this, I don’t. It just leaves me feeling sluggish. I would happily do the Parkrun again and again. I’d like to see my daughter grow in fitness, speed and stamina. I’d like to see her run all the way. I’d like to see 50 people finish after us rather than 25, but we’ll see what happens! 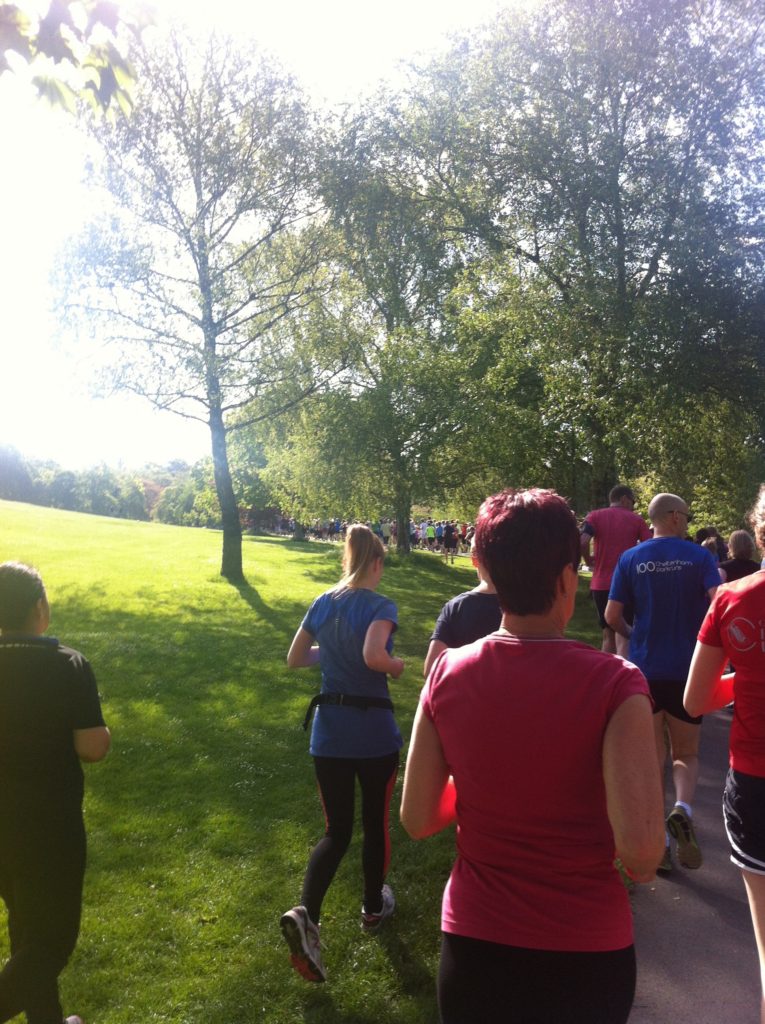