For the last couple of months, my daughter has been bugging me about starting running. I must admit, I was a little sceptical. I don’t know enough about the science of kids and exercise, but I know that running generally is something which can cause damage – plenty of adults get to the point where they can’t physically run any more as they’ve damaged their knees through years of pounding the pavements. But, then again, kids do run a lot in daily life – in the playground at school and in the sports and activities they do outside school. So it couldn’t do that much damage, could it?

She has taken to running wherever we go – whenever we’re out walking or going to the shops, she’s always sprinting off ahead. I love watching her run. She’s just so fast and her technique is beautiful.

My daughter also very competitive. She wants to be the best. And she is forever setting herself long term goals to be the best. Since she’s been in the juniors, she’s been in a few competitive sports events against other schools – a couple of cross country races, an athletics event and a swimming gala. Generally, our school does pretty badly against other schools. But my daughter wants to do better. In the first instance, she wants to make sure she’s always the one picked for the team. Looking further into the future, she wants to be as close to winning the schools’ cross country race in year 6 as she can.

She hadn’t got any proper trainers for running, just some cheap pumps for PE or her dance trainers, which are very big and bulky, so I got her some running trainers (and she conned me into getting her some running leggings). She loves her running gear. She teamed them up with her Pineapple dance hoodie (because you can take the girl out of the dance class, but you can’t take the dance class out of the girl) and we went for our first run. 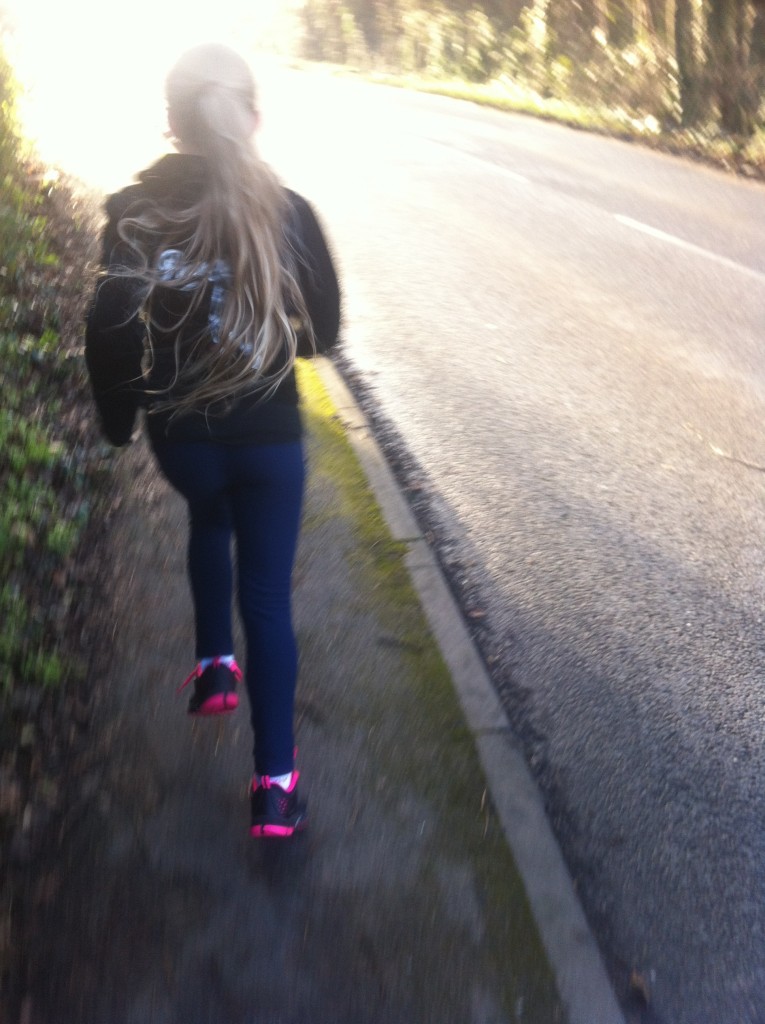 I know she’s been doing about a mile in cross country at school, so we went for my lap of the block, which is just under a mile and a half, and I let her set the pace. She set off incredibly fast – I almost struggled to keep up.

‘Slow down, you need to pace yourself.’

Not surprisingly, she needed to walk after less than half a mile. But it was a short walk, and she was off again. She ran a bit slower, but she needed another walk. She was tiring towards the end, but she was determined. There was no way she was walking again.

She ran the whole thing in 16 minutes, which isn’t much more than 10 minute miles – that’s a pace that many adults run at (I run at around 8.30-8.45 a mile). Despite the stops, I was very impressed with her pace.

The following week, we were running again.

‘I’m only going to stop once this week.’

So she did. She paced herself a little better this time.

She was tiring at the end, but she pushed herself for a sprint finish, which was totally her own idea.

Her next goal is to complete the run without walking. By running regularly, she will learn to pace herself better and will inevitably increase her speed as her fitness and stamina increase.

I am so proud of my daughter for her competitive nature and her determination. Everything she achieves is because she wants to do it. That year 6 cross country win is in her sights.

If you’re feeling Loud ‘n’ Proud about any achievements this week, however big or small, please add them to the linky below and grab the badge if you like.

Next week, Loud ‘n’ Proud will be hosted by Mama Owl.