Prescription sunglasses (not taking it lying down)

Home » Family » Prescription sunglasses (not taking it lying down)

Every couple of years I like (as in really don’t like at all) to have a fight to secure my kids some prescription sunglasses. These are not fashion items. They’re not to look cool or funky. They are essential items SO THAT MY CHILDREN CAN SEE IN THE SUN. Yes, I am shouting. Because it winds me up.

Glasses for children are free on the NHS. Pretty much. Unless your child has an adult-sized head, like my 11 year old son (who has had an adult-sized head since he was 9). Adults can get free prescription sunglasses. Kids? Not so much. Unless their eye test falls within the magical month when the opticians see fit to offer them for free. Which my kids’ eye tests don’t. And woe betide anyone who tries to book a test when it isn’t due. Or tries to sneakily go to another optician. I’ve tried. Sigh. It just doesn’t work.

My daughter’s prescription sunglasses are London 2012 ones. She got them in 2011. When she was 5. She’s now 9. You won’t be surprised to discover that she has grown in that time. This year is the one. The one where she has to get new sunglasses (shudder). 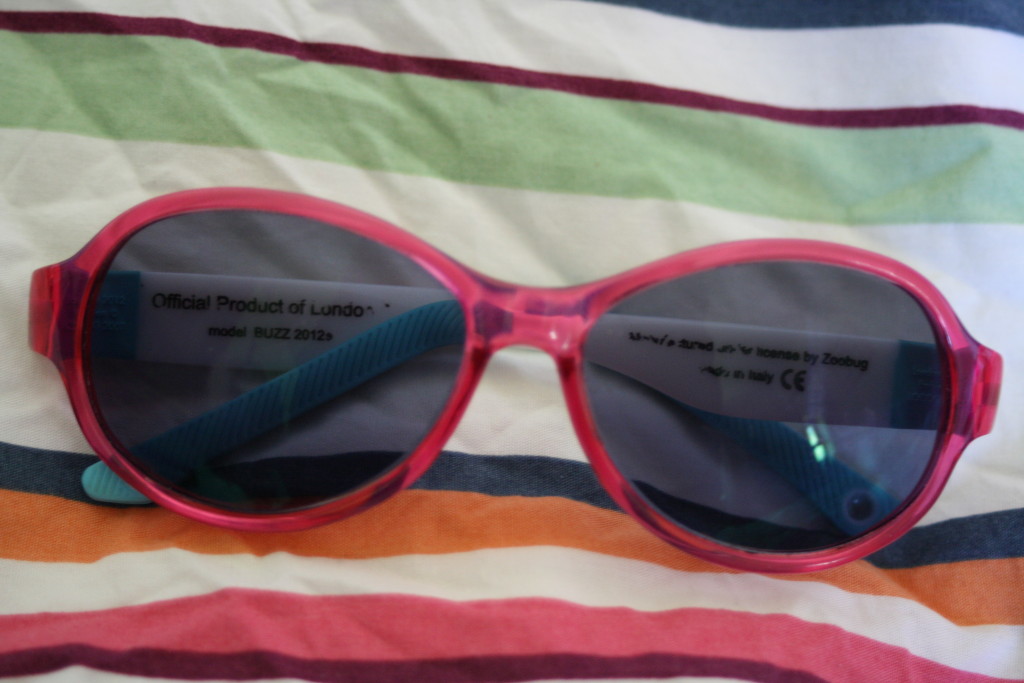 Time to say goodbye to these babies…

And there they were. In Boots. Just sat on the shelf. Actual children’s sunglasses. That you can choose and have made to your own child’s prescription. And for only £40. Result! (You see, I don’t have an issue with paying £40 for sunglasses, but often they don’t have them in stock and then they offer you normal lenses with tinted glass, which don’t come on the NHS and they do the maths and announce it’s going to cost £135. For an essential item for your child’s health.)

There were six different pairs to choose from. Clearly some would be too small and some would be too big, but, by the law of averages, two would be likely to fit. And, as they’re only sunglasses, we weren’t even bothered how they looked. We just need the sunglasses.

My daughter is 9. If we take, for the sake of argument, that children generally wear children’s glasses between the ages of 5 and 13, she is right in the middle of that. She is average. She should fit the damn glasses.

‘Oh, don’t worry,’ said the optician. ‘She can just choose some regular frames and we can put tinted glass in them for £40.’

Her pupils were measured, the lens colour was selected, the information was input into the computer.

And I did something I’d never done before. I said no. Not no to having the glasses altogether (as I’ve done in the past), no to that price.

I’m not a person who negotiates or argues or haggles. I’m a person who, in a very British way, says ‘That’ll be fine,’ while inwardly stressing that I’ve just agreed to pay way over the odds for something. But this time I wasn’t having it.

There were glasses priced at £40. They didn’t fit my daughter (no fault of my own or her own) and I wasn’t going to pay over £40 for an alternative.

We went through the motions of trying to make the too-big glasses fit. But they really didn’t fit.

I stuck to my guns. Another optician came over. He scrolled through the computer again and again. He knew I wasn’t budging.

And then, all of a sudden, he found the magic code on the computer. The one he could use to make my daughter’s new sunglasses magically cost £40.

I’d done it! I’d been strong. I’d negotiated. For the first time ever, I hadn’t backed down. I felt so proud of myself.