A certain high street optician (OK, it was Specsavers) has recently been advertising free sunglasses for kids. Great. I have a kid (in fact, two) who wears glasses. Can he have his free sunglasses, please?!

We’re hoping to go abroad in the summer. I suspect my boy will need sunglasses. (My girl got a pair last year, thank goodness, although you can read about our initial attempts to get her a pair here – it’s one of my first ever blogposts!) He is entitled to free glasses as a child, but what about these mythical free sunglasses? No blimmin’ chance apparently.

Now we’re not Specsavers customers, I admit. Although kids’ glasses are funded by the NHS so actually it shouldn’t REALLY matter where they come from. Should it?! Or am I missing something here? I don’t have a business brain.

So we started in our usual place. Boots. They’ve been pretty good to us over the years. Well, apart from that time we tried to get my daughter some sunglasses…

‘My son needs some prescription sunglasses, I’m wondering how much it would cost?’

Well in that case, all they can do is sell me some ‘free’ glasses for £79 and put some £15 tinted lenses in them. Yes, you read that right. They want to charge me £94 for a pair of prescription sunglasses for a 9 year old. A 9 year old who would no doubt much prefer one of the fun kids’ styles all his friends wear, but can’t have them BECAUSE HE CAN’T SEE VERY WELL. And that isn’t his fault. Or mine. And he doesn’t earn any money. So why should he I have to pay £94 for a pair of sunglasses?

Now I recall when my kids started wearing glasses back in the dim and distant days of 2009 being told they could have up to four free pairs a year on the NHS. What happened to that? I realise that sunglasses are not as essential as real glasses, but it is actually damn uncomfortable wearing real glasses in bright sunshine, so maybe they are a bit essential. So as they are only a bit essential I would be willing to pay up to about £40 for a pair. But not £94.

So I thought I’d try Specsavers. You know, on the off chance. Since they’re advertising free sunglasses and all…

They gave me the free sunglasses blurb. But then I had to admit that a) his prescription isn’t from Specsavers and b) his test isn’t due until October and it wasn’t happening.

He could try on some styles. But it was going to cost £64. And frankly he didn’t need to try on those styles because they were TODDLER SIZE. He’s a big 9 year old. He actually wears the same size glasses as me. But he’s still a kid! He’s not even into double figures yet, for flip’s sake! He could go up to adult sizes of course. But that would cost more…

So I’ll just leave my son to burn his eyeballs. That’s all fine, isn’t it?! 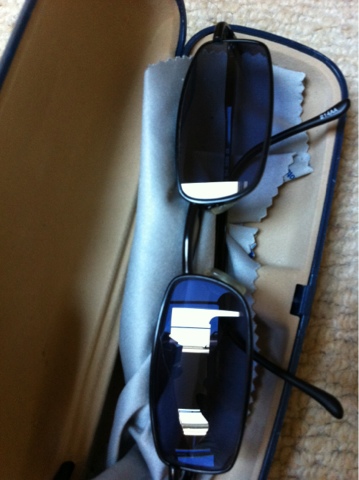 These are his prescription sunglasses from 2010, when he was 6. I paid £15 for them. They are so not going to fit now