The end of term…

You know that thing every parent says at Christmas before the end of term ever year? You know: ‘It’s such a long term, they’re all really tired, they all need a break, they’re all ill etc etc etc… ‘. That thing? Well, I don’t say that. My kids don’t get tired and they don’t get ill.

But this year they have. And I’ve found myself saying those words. And now I’m just hoping the break will actually mean they’re on fighting form for Christmas day.

It started on the second-to-last Monday of term. My younger son woke up coughing and wheezing. He’s not asthmatic, I’ve never heard him wheeze before. I’ll be honest, it scared me a bit. It hurt so much to cough and even breathe, that he was crying. There was no way he could go to school. My son (like all of my kids) never misses school and he absolutely hates to miss it. The thought of missing school made him cry more, but I kept him at home.

The next morning it sounded like there was a dog barking in the bathroom. My daughter had developed a cough, different but in its own way just as bad as her brother’s. It sounded horrendous. It sounded like just the sort of cough that teachers would hear and get straight on the phone for me to collect her. I suggested maybe she ought to stay at home. But she was singing at the pub that day and she wouldn’t miss that for the world. I wasn’t really sure she would cope with the two mile walk in the cold air with her cough, but she was determined.

The cough didn’t ease all week, but, by some miracle, she managed to keep going to school throughout.

Calpol and Calprofen worked their magic as only they can and he made it to the concert. He made it to school next day to watch the pantomime and to his friend’s house after school, but he looked pale and he wasn’t himself. In the meantime, his brother who had remained remarkably healthy throughout, had also developed a nasty cough.

On the final day of term, the temperature was a bit higher and the headache a bit worse. His eyes were sore too and he was feeling miserable. Still, he wanted to go to school. But the medicine took longer to take effect and finally he accepted that he needed to stay at home to rest.

And I found myself saying those words. Those words that all parents say, apart from me. This year, we really needed the end of term. 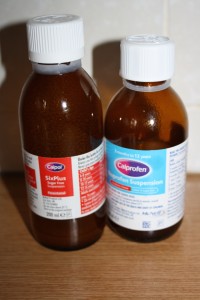