The last seven months of Anne Frank by Willy Lindwer

When we went to the Anne Frank House in Amsterdam last year, it was such a moving experience. I’d already read The Diary of Anne Frank as a teenager and wanted to find out more about her. So I bought this book, which charts memories of Anne Frank in the camps of Westerbork, Auschwitz and Bergen-Belsen.

Everyone knows the story of Anne Frank and her family and how they went into hiding for over two years. They were arrested in August 1944 and were on the final transport to leave the Netherlands for Auschwitz in September 1944. It doesn’t matter how much you know about the holocaust, the stark facts never fail to shock. By the time the Franks arrived at Auschwitz, two million people had already been gassed there. Anne and her sister died in Bergen-Belsen in March 1945, just weeks before the camp was liberated by the British.

The book is the complete transcript of a film project from the late 1980s by Willy Lindwer, who interviewed six Dutch women who had known Anne Frank and her family. They include Anne’s childhood friend, Hannah Pick-Goslar, who she had grown up with and later encountered on the other side of the fence at Bergen-Belsen. The other interviews are with women who spent time in the camps and saw women die of typhus, starvation and exhaustion and watched elderly people and children taken to the gas chambers. Their stories are both horrifying and inspiring. Many of them had kept their stories to themselves for a lifetime, not wanting to revisit the memories.

Needless to say, this is not an easy read. But if you care about history and the terrible things people have done in the past and continue to do in the present, and you believe in peace, this fills a gap in our knowledge of the world. For these women to talk to an author and film-maker was a brave move, but their bravery has created a unique historical document. 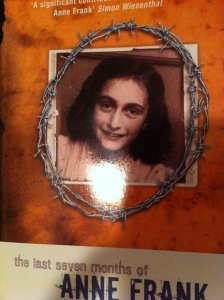