A couple of weeks before my birthday, I was in town with the younger two late on Saturday afternoon, when I saw an advert for the Queen Extravaganza – a Queen tribute band. After the Levellers, Queen are my favourite band. They were the soundtrack to my life from 13 to 18. Not just A Kind of Magic and Radio GaGa, but all the really old, quirky album tracks from A Night at the Opera and A Day at the Races. I cried when I heard Freddie Mercury had died, on the morning of my sister’s 9th birthday, and I was lucky enough to go to the Freddie Mercury Tribute the following summer. Yep, I was a massive Queen fan.

I would probably have gone to the Queen Extravaganza anyway, but then I saw the date. My birthday. I would normally go to the cinema on my birthday, but, like going to see The Levellers on my husband’s 40th, this was a no-brainer.

So on my birthday, I swapped my smartest and most grown up looking Superdry jumper for my retro Queen Tshirt and headed off for a night of Queen music.

There was a big curtain with Queen’s logo hanging over the stage. I imagined it coming crashing down to the sound of Hammer to Fall.

The music started. The curtain came crashing down. It wasn’t Hammer to Fall. I don’t know why I’d even expected something so random. It was Tie Your Mother Down (which, to be honest, is actually more random than Hammer to Fall). It was followed by Don’t Stop Me Now and then Save Me. Save Me is often going round in my head. I sing it when things go wrong. It starts with the words ‘It started off so well… ‘ which can be the story of anything from trying to get out of the house on time to the kids arguing, having a crap day out or burning the tea. 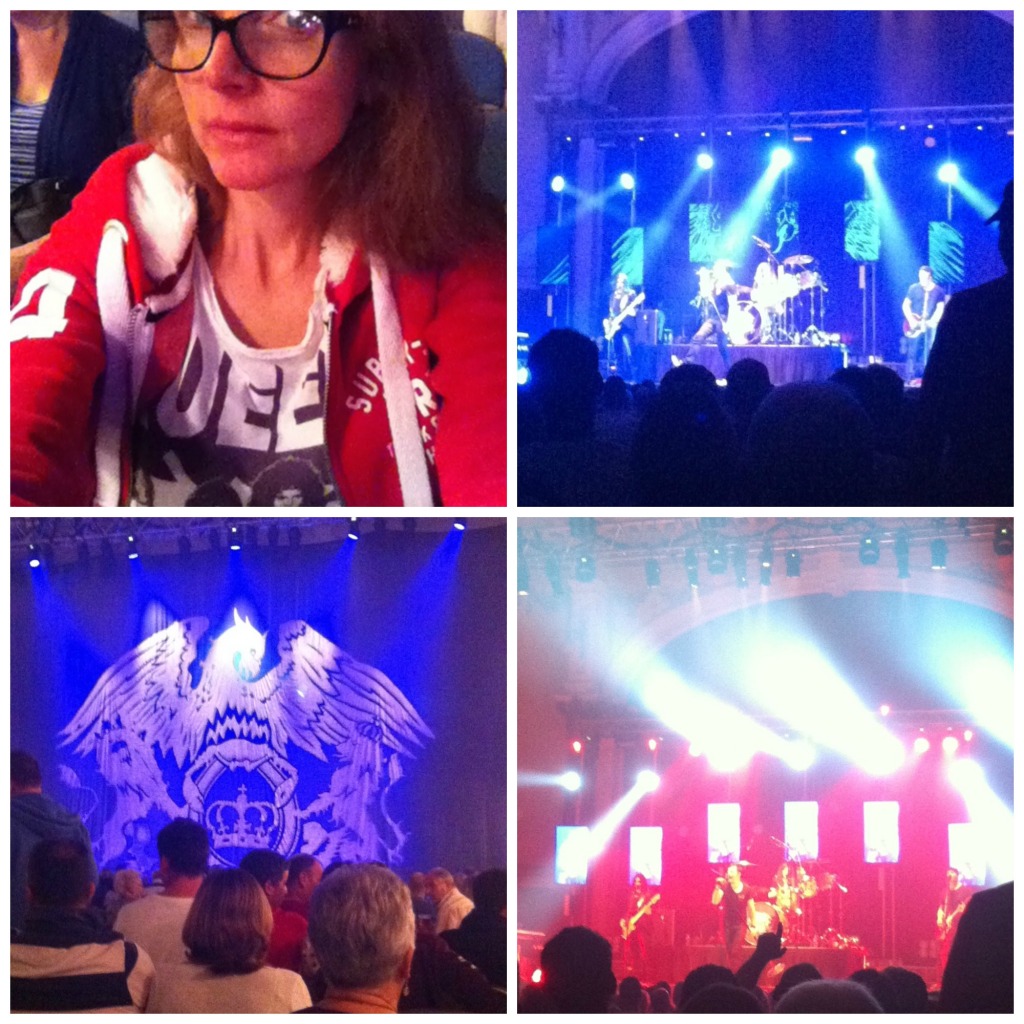 Then there was Seven Seas of Rye, Killer Queen and Hammer to Fall (see, not completely random).

They weren’t a tribute band in the traditional sense. There were five of them rather than four and no yellow leather jacket and no Brian May hair. They were ‘just’ a really talented bunch of musicians. I was surprised to discover most of them were American. The singer had a look of Freddie Mercury about him around the mouth and teeth, which seemed to jut just like Freddie’s had. He had the Mercury moves too. His voice was pretty amazing (especially on Love of My Life), but not quite Freddie Mercury. But nobody can be Freddie Mercury. The guitarist sounded just like Brian May, which is just amazing. The band were hand-picked by Brian May and Roger Taylor to play their songs, so it’s no wonder they’re good.

Apparently Queen themselves played Cheltenham Town Hall, 40 years ago in August 1974. Freddie Mercury would have been 68 this year.

My husband isn’t a Queen fan. He sat through the first half of the concert saying things like ‘I’m down to 37.5% now’. Working out the percentage of songs he knew seemed to keep him happy! (Don’t tell him I said that!)

But then it was Bohemian Rhapsody. The band even handed part of the song over to a video of Queen singing it, back in 1975.

From there, it was pretty much all songs my husband knew – Under Pressure, I Want It All, Another One Bites the Dust…

You don’t expect to be one of the youngest in the room at a concert on your 41st birthday, but we were surrounded by people who were well into their 60s and 70s. To me, the only way to enjoy live music is to sing and dance along with it, but everyone was sat down. I could hardly stand up on my own and block the view of the elderly people behind me. But, finally, during Another One Bites the Dust, the band encouraged everyone to stand up. It was only the one song, but it was certainly enjoyable.

I Want to Break Free, Radio GaGa, Fat Bottomed Girls (in which Queen Extravaganza broke the golden rule of Fat Bottomed Girls – that it must always be followed by Bicycle Race – or ‘I want to ride my bicycle’ as some people may call it) and Somebody to Love…

It was time for the encore. There was only one thing it could be – ‘Empty spaces, what are we living for? Abandoned places, I guess we know the score. On and on, does anybody know what we are looking for?’ The Show Must Go On, a ‘new’ Queen song, released not long before Freddie Mercury’s death in 1991, but I realise it isn’t new at all – it’s 23 years old.

With We Will Rock You and We are the Champions, the show was over. (This is another pair of songs that must always be played together.)

I can honestly say I can’t think of many better ways to spend the evening of my 41st birthday. If you ever get the chance to see the Queen Extravaganza, I would definitely recommend that you take that chance.